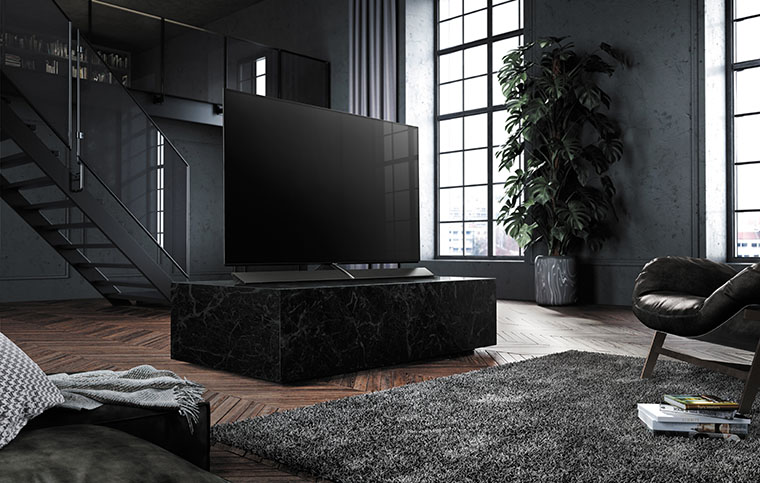 Sydney, 11 April 2017 – Japanese consumer electronics giant Panasonic today launched its 2017 model TVs, along with a range of UltraHD Blu-ray players and some audio products. It’s the OLED models that are the most interesting element of the launch.

Until now OLED has been very much an LG-only technology in Australia, except for the year they first appeared, when Samsung also had a model, soon dropped. Panasonic’s launch was also marked by a complete absence of curved models. The brand seems to have largely stayed away from that fad.

OLED stands for Organic Light Emitting Diode. So rather than having a backlight (employing LEDs in premium TVs) with its light controlled by a panel of liquid crystals, OLED panels create their own light on a per pixel basis. That means that each pixel can switch off entirely when it’s supposed to be showing “black”. And that’s what they do. That in turn means that OLED is the best technology presently available for producing deep, deep blacks, along with subtlely graduated not-quite-black dark areas.

At the launch, Panasonic mentioned a couple of times that its experience with plasma – also a technology which emits light at the pixel level – suited it to the best design with OLED. Without reflecting on Panasonic’s actual products, I’m not so sure. One problem with plasma panels was that smoothly ramping down the brightness of a pixel to zero was not possible. They’d go very low, and then switch off abruptly, and then need a little burst of power to get going again. So plasma ultimately couldn’t produce the deep blacks that is a natural feature of OLED.

Panasonic is starting with two OLED ranges. The premium range is the EZ1000, available in 65 inches from July ($8899) and a massive 77 inches from November (price to be advised). This one is marked from the lower model principally by the use of an “Absolute Black Filter”, which appears to be a screen treatment which reduces the effects of ambient light on the picture, and the “Dynamic Blade Speaker”. The speaker forms part of the stand; basically is the stand. It sits below and slightly forward of the body of the speaker, holding up the TV with a single central arm. At the back of the TV is a single leg at the centre.

I gave the whole thing bit of a shake, and it seemed secure.

Inside this Dynamic Blade Speaker – which was designed by the folk at Panasonic’s Technics division – are eight woofers, four midrange drivers (Panasonic calls them “squawkers”) and two tweeters, loaded by four passive radiators.

The rest of its features are shared with the EX950 OLED TVs, also available in July in 65 inches ($7199) and 55 inches ($4999). These include Panasonic’s improved Studio Colour HCX2 4K Processor and “HEXA Chrome Drive 4K Pro” drivers for improved colour, including support for almost one hundred per cent of the Digital Cinema Initiative (DCI) colour space, along with High Dynamic Range (HDR) support.

The smart functions are being upgraded to a “My Home Screen 2.0” interface, which is presumably still based on Firefox OS. Panasonic says that it’s easy to customise for the owner’s preferred apps. There’s support for 4K HDR streaming, where available, from Netflix, Amazon, BigPond Movies and YouTube.

And, of course, they implement Freeview Plus to take advantage of the enhancements available to free to air TV stations.

Of course, Panasonic still has LCD TVs in both 4K and full HD. The top of the line EX780 range (released in April and May) comes in three sizes: 58 inches ($3299), 65 inches ($4499) and 75 inches ($7199). This line shares with the OLED TVs similar screen tuning and picture processing and twin HD tuners. It features local dimming – the backlighting in a grid for more effective separation of dark and light areas of the picture – but apparently not the superb “Honeycomb” scheme for this that Panasonic used in its premium TVs last year.

The 65 and 55 inch versions can swivel on their stands, and the 55 inch model comes with an extension pole in the box. This goes between the swivel stand and the base, raising the TV by perhaps 600mm so it can be set on the floor, rather than a bench. A short pole is also provided for more conventional mounting.

I have to say: why hasn’t someone done this before? I can see Panasonic selling a lot of these TVs on the basis of that feature alone.

Panasonic made an astounding claim during its presentation. In the US more UltraHD Blu-ray discs were, it says, sold in 2016 than regular Blu-ray discs. I’m not sure if that’s indicating so much enormous acceptance of UHD as showing a collapse in the sale of Blu-ray discs. Perhaps a bit of both.

UPDATE: It turns out that what Panasonic was really saying is that uptake of UHD in the US in 2016 was faster than it was for Blu-ray when it was introduced a decade earlier.

Anyway, Panasonic is introducing two lower cost UltraHD Blu-ray players in June to go with its premium DMP-UB900. The DMP-UB300 will sell for $449 and provides all the functionality that you need, plus some smart functions. The DMP-UB400 looks nicer, has two HDMI outputs (in case your audio system can’t handle the UltraHD video), and includes WiFi.

Panasonic also teased the DMR-UBT1, to be released in September, price as yet unknown. This will be combine HD digital TV receiver and recorder with a 2 terabyte hard disk, UltraHD Blu-ray player, and the ability to burn TV broadcasts to recordable Blu-ray discs.