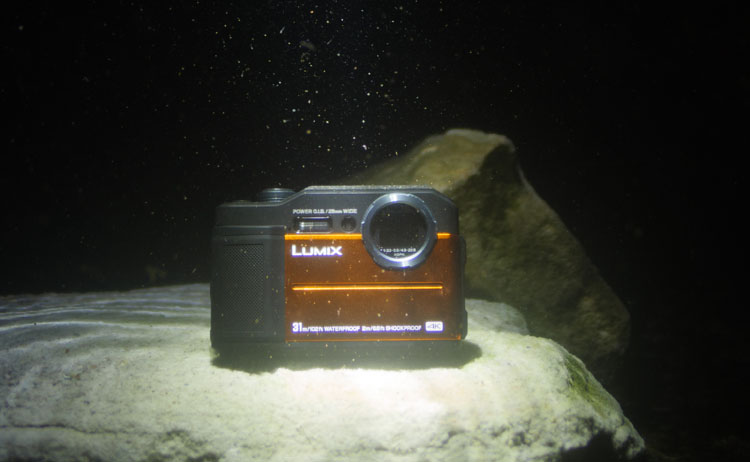 You may ask, why would one want a compact camera these days of camera-equipped smart phones? Well, if it’s the Panasonic Lumix DC-FT7 then there are two reasons: toughness and zoom.

The Lumix DC-FT7 is one of Panasonic’s tough range. That means it can take a moderate amount of punishment. I use the word “moderate” because if you drop it from high enough, smash it with a hammer or engage in similar levels of foolishness, it will break. But unlike most cameras, it is rated to survive a two metre drop, and can withstand sub-zero temperatures, and can take photos and video underwater.

It’s rated at IPX8. Panasonic says it’s good to 31 metres, which is seriously deep. If you dive that deep then you have to take into account things like gradual decompression during your ascent.

Inside is a 20.4 megapixel sensor. At the front is a smallish lens, inset into the body by a few millimetres for drop protection. At first I thought the camera was likely fixed in focal length, or had at most a very modest zoom range. But it turns out the camera uses folded optics – the incoming light is reflected (typically by a prism) in a different direction. That gives Panasonic more room to play with. The result is a 4.9mm to 22.8mm focal range. In 35mm-equivalent terms, that works out to 28mm to 128mm: a 4.65:1 zoom. That’s something not available with your typical phone camera. It also features optical image stabilisation.

At the back there’s a 75mm, one-megapixel rear monitor behind tempered glass, and a small viewfinder, also a touch over one-megapixel in resolution. And that means that you can frame your shots, even in lighting conditions that make it difficult to use a rear monitor. The monitor has auto-brightness, and I found it useable in almost all circumstances. Most higher end cameras have the ability to automatically switch between the eyepiece and the monitor. With this one you have to tap a button to switch between the two. There’s dioptre adjustment for the viewfinder.

The battery and SD card slots are under a locking door at one end of the camera. The card’s a little fiddly because of tight space, but I could still manage it with a bit of care. Also under the door are the two connecting ports. One is Micro-B USB for charging and for connecting to a computer or printer. The other is Micro HDMI for outputting your photos and video to a TV.

The camera also features Wi-Fi connectivity. You can use this for transferring photos, but the most useful functions are remote control of the camera, and for adding locating tagging to your photos.

Panasonic has loaded up the camera with an interesting mixture of fancy functions from its higher end camera. There’s “Intelligent Auto” shooting mode, plus some pre-set scene modes. One of those is for underwater shooting. There’s also a manual mode so you can set your own exposure parameters.

What you can’t set is the focus. There is no manual focus. But there are several auto focus modes. If you’re doing tricky stuff you can choose spot focus, half-press the shutter and then adjust your framing. But if there’s a bird several branches back on a tree, you’re probably not going to be able to focus sharply on it.

However, you can use Panasonic’s post focus mode, which uses the 4K photo mode to take a video with a couple of dozen frames. Each of those is focused on a different part of the scene and you can select which frames you want to turn into pictures. The downside of this is that these are 8 megapixel shots rather than 20.

The 4K photo mode can also be set to “4K Pre-Burst”. You point the camera at where you expect the action to be. When it starts, you press the shutter and the half-second before and half-second after is captured.

One thing not available: RAW format. Your photos will always be subject to a little post-processing by the camera.

On the video side of things, it can shoot UltraHD at up to 30 frames per second.

The “iHandheld Night Shot” mode uses the same trick as some recent high-end smartphone cameras. It takes a burst of pictures and then constructs a composite image using the best parts of them.

The camera comes with a charge cable and a 5 volt USB-style power supply. You charge the battery in-camera. It’s rated at 250 to 300 images of life per charge.

Swimming with the Panasonic Lumix DC-FT7

Actually, I did very little swimming with the Lumix DC-FT7. But I did carry it around and found it quite fun and easy to use.

Autofocus was reasonably good and fairly fast. I could usually grab a shot within a second or two of switch-on. The camera always switches on in wide angle mode, so you learn to stab at the “T” button quickly when something’s further away. And while reasonably good, the autofocus did fail in perhaps a quarter of shots. It preferred not to be too hurried, so I basically took photos with a pause at half shutter, just to make sure the camera had a satisfactory grasp of the scene.

The field of view at 28mm (equivalent) was pretty much the same as with my Google Pixel 2’s camera. I preferred the latter’s images. There’s a lot more processing power in a smart phone than there is in a camera, and Google puts it to good use. The phone did a better job of enhancing brightness and popping the colours. But a little auto contrast enhancement in photoshop closed the gap.

I am being hard here. The shots at 28mm were fine. And of course the Google was pretty much a fail when it came to getting in closer. Digital zoom on a phone is not a pretty thing. That’s where this camera shines. In a box not much bigger than a phone you can get, much, much closer to your subject.

The other way – or the other place, rather – it shines is underwater. Unfortunately, here in Canberra there are no decent places to do underwater photography. Cameras are banned in public swimming pools for obvious reasons. And the rivers are murky. I took some underwater shots of tree roots through the murk. That proved that the camera worked, and it seemed to suffer no ill effects from the experience. If you are going to somewhere with more picturesque underwater subjects, this camera would be a worthy carry-along.

You can connect the camera to your Wi-Fi network if you like, but a direct connection from your phone to the camera is the way you’ll generally use it. You’ll need the Panasonic Image app on your phone – iOS or Android. Some models of camera will display a QR code on their monitor. You can use the app to scan this and it sets up a connection between phone and camera. This one doesn’t do that. Instead you have to use your Wi-Fi settings to choose the camera as an access point.

Once you’ve connected, you have several options. The main one I used was remote control: you can have the image seen by the camera showing on your phone, along with a bunch of controls. They include zoom. So you can do things like set up the camera near a bird bath and have it take photos or video from a distance.

The transfer rate was pretty slow when connected to a computer by USB cable. According to the Windows copy dialog, it ran at between 6.5 and 7.0Mbps. Copying 321 files – mostly photos with half a dozen videos – amounting to 1.73GB – took 4 minutes and 24 seconds. That works out at 6.72Mbps, or about the speed you can expect with a slow old USB memory stick. To copy the same stuff directly from the card using a fast Lexar card reader took only 42.6 seconds. That works out at 41.6Mbps. (I used the card provided with the camera by Panasonic, and it turned out to be a fairly slow card.) If you use a card with a higher speed rating, the speed discrepancy will increase.

With nearly five times zoom, the ability to shoot underwater, and respectable quality, the Panasonic Lumix DC-FT7 is the ideal summer holiday camera. And since it’s tough, it should survive the experience.

Check out Panasonic’s website for the Lumix CD-FT7 here. Check out our reviews of some of Panasonic’s other cameras here.