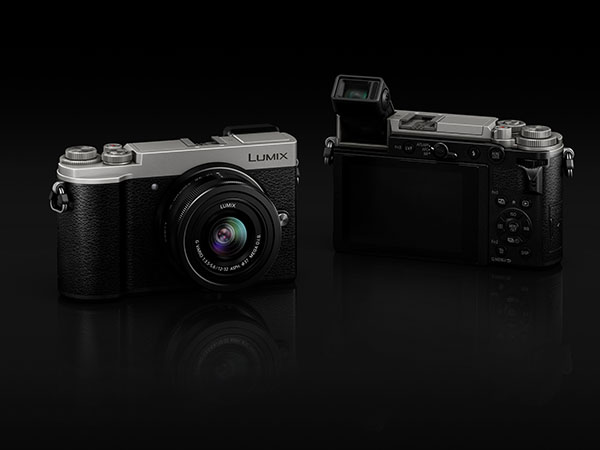 One of the promises of mirrorless cameras was, well, smaller cameras. And, yes, the premium models (see here and here) from the Panasonic Lumix G Series are a little smaller than many DSLRs. But the Panasonic Lumix DC-GX9 is the one that combines high quality and compactness.

According to my scales, this camera is only 543 grams in weight. That includes the lens, SD card, battery and strap. By contrast, my own Panasonic Lumix GH4 weighs 938 grams (with a 12 to 35mm zoom lens in place). So, the Lumix DC-GX9 is much less drag on the shoulder in the hand carry.

It’s also only 134mm wide, from strap lug to strap lug, or 124mm wide across the body. And it’s 73mm high and deep. That’s with the included lens and lens cap, and with the lens wound into its dormant state. We’ll talk about that later.

The Lumix DC-GX9 is available in standard camera black, but also in two tones with a silver top. I’m rather keen on the retro look of the latter. It takes me back to my old Olympus Pen 35mm camera (from a very, very long time ago).

The Panasonic Lumix DC-GX9 uses the Micro Four Thirds lens system, so it’s compatible with the wide range of Panasonic Lumix and Leica lenses. But it also comes with a compact lens installed, so it’s ready to go from the box.

The camera uses a 20.3 megapixel “Live MOS” sensor. It can take photos in JPEG (with your choice of two compression levels) or RAW. Or both JPEG and RAW.

And being Panasonic, it also has a 4K Photo mode. That takes mere 8.3-megapixel stills but as 30fps sequences. Aside from faster than usual burst speeds, this also allows “pre-burst”. This is a battery-chewing mode because it keeps the camera in focus on whatever it happens to be pointing at, all the time. When you release the shutter, it stores the last thirty frames and stores thirty more subsequent frames. When things are moving fast, that gives you a better chance of getting the shot that you want.

But there are plenty of other fancy features, like time-lapse shooting in which the camera takes pictures at regular intervals and then converts them to a video sequence. And stop-motion animation, in which you take shots of your plasticine creatures, moving them between shots. The camera converts that also into a video sequence.

There’s bracketing for exposure, aperture, white balance and focus. That last can capture up to 999 images at different focus depths. You can choose which one you want, or use focus stacking in software like Photoshop. That combines a series of photos focused at different depths into one, potentially delivering incredible depth of field.

You can also do focus stacking in camera, using the 4K Photo mode.

The camera has five-axis optical image stabilisation. Panasonic says that this gives up to a 4-stop shooting advantage. It also works in conjunction with the lens-based OIS provided in many Panasonic lenses (although not the included one) for even greater immunity to camera shake.

Of course, the camera does video. With lots of options there, including UltraHD recording at 24, 25 and 30 frames per second, along with full HD and 720p. The UHD recording modes all run at 100Mbps.

There did not appear to be any high frame rate or slow-motion capabilities. Of course, it also records audio, but …

There’s no external microphone input, so don’t expect to do professional videography on the cheap. Neither is there a remote trigger.

But that doesn’t matter too much, because the Lumix DC-GX9 does have Bluetooth (the low energy version) and 2.4GHz Wi-Fi. You can use either with an app on your phone (Android or iOS) to remotely control the camera, or to transfer photos from camera to phone (transfers use Wi-Fi for bandwidth reasons).

The 7.4Wh battery charges in place via a Micro-B USB connection. That resides with a Micro HDMI output under a little spring-loaded door on the side of the camera. That door’s much easier to operate (and kinder to the fingernails) than the usual ones, which require prying open. The SD card slot is next to the battery.

To frame your pictures you have a choice of the 75mm, 1.24-megapixel rear monitor, or the 2.76-megapixel electronic viewfinder. The latter has dioptre adjustment to make sure it works with most eyes. Unusually, you can tilt this from the regular position up through 90-degrees, giving you more options for how you take your pictures.

The lens provided with this camera is a little zoom one with a 12 to 32mm focal length and f/3.5 to f/5.6 maximum aperture. The 35mm equivalent focal length is from 24mm to 64mm. So there’s some flexibility, but not all that much in the way of telephoto functionality.

Remember, you can always add a different, more flexible, lens. But this will most likely be chunkier.

The supplied lens protrudes by 24mm when not in use, or 30mm with the lens cap in place. It extends out to 48mm when you’re using it. Indeed, I kept taking off the lens cap, switching on the camera, and being presented with a message on the monitor: “Please rotate the zoom ring to extend the lens”. You turn it by about a 12th of a rotation to push out the lens elements into the right position.

The only other drawback to fast operation is the lack of a drive dial, unlike the bigger Lumix G models. To flip to burst mode or 4K photo mode, you press one of the buttons on the back and then select the mode using the arrow cluster. A bit slower and more cumbersome than a dial, but still usable.

The photos themselves were excellent. The Depth from Defocus autofocus was fast and sure. A switch to manual focus was convenient to my thumb, for those times when other things tricked autofocus. There’s a dedicated dial for exposure compensation, and that’s also right under the right thumb, and easily adjusted. Two click dials give you a choice of front or back when adjusting aperture or shutter.

Lenses for the Lumix DC-GX9

The included lens was decent enough. It sells for $499 all by itself. But Panasonic also tossed into the review package the Lumix-branded Leica 12-60mm zoom lens, so I took the opportunity to take some comparison shots from a tripod, using the same settings for each.

Who knew? It turns out that the pictures produced with that $1,199 Leica lens were better than those with supplied lens. Deeper blacks, and noticeably more detail when viewed at full resolution on my computer monitor.

But. That Leica lens rather defeats the compact nature of this camera. Changing to that lens brings the weight up to 844 grams. And the whole thing is chunky.

You can transfer your pictures to a computer directly from the camera using its Micro-B USB connection. This was rather slow though, running at around 12Mbps. It took 66 seconds to copy 142 pictures (830MB) to my computer that way. Popping the card out and into a card reader, the same copy took ten seconds and an indicated 80+Mbps. Ah, I see, the specs say that the USB socket conforms to USB 2.0 standards, thus the slow speed. (Even though the formal name for USB 2.0 remains “High Speed”.)

I liked the Panasonic Lumix DC-GX9 a great deal. It has an excellent set of features, and out of the box outperforms a compact camera by a long way, while not being all that much larger. And it has the potential to deliver stunning shots in all sorts of conditions if equipped with the right lens.