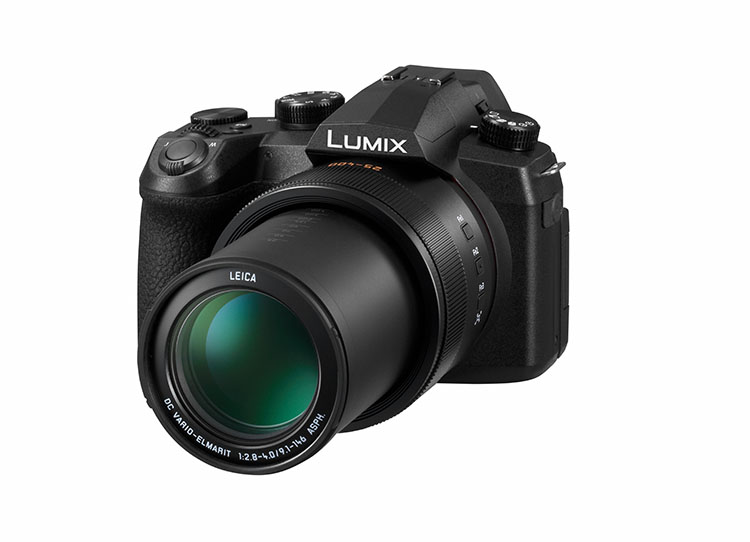 Panasonic has announced the release of a new fixed-lens zoomer. The Lumix FZ1000 II is an update on the, well, Lumix FZ1000. It’s for those who want something bigger and better than a compact camera, but don’t want to fiddle around with changing lenses.

The widest aperture ranges from f/2.8 (wide angle) to f/4.0 (telephoto). The minimum aperture has been narrowed down from that of the previous model – from f/8 to f/11, increasing depth of field.

The MOS sensor has a resolution of 20.1 megapixels and is a respectable one inch (25.4mm) in size. Panasonic says that the “large sensor” in the Lumix FZ1000 II “results in a dramatic reduction of noise, even when shooting at ISO 12,800.”

In addition to the flexible rear monitor, which swings out to just about any angle, the camera offers a 2.3 megapixel live view finder. For reasons I don’t fully understand, the battery life in digital cameras is typically shorter with images taken using the viewfinder than it is using the rear monitor. The Lumix FZ1000 II has a relatively slow refresh mode for the viewfinder – a still respectable 30fps – which brings battery longevity up to almost matching that with the monitor: 430 images compared to 440.

The camera offers full manual options for the enthusiasts, but also has fast (0.09 seconds) “Depth From Defocus” automatic focus. It shoots both JPEG and RAW, and can do bursts of up to 12 frames per second of up to 100 images with JPEG, 26 with RAW.

Plenty of the features have been around for a few years, but some remain largely the domain of Panasonic. For example, the 4K Photo and 4K Pre-Burst modes eliminate timing problems at the cost of some loss of resolution. 4K Pre-Burst, for example, grabs 4096-pixel wide images continuously, so when you press the shutter release you have a couple of dozen frames before and after the press. Want to make sure you have a shot of bat striking ball? This makes it a near certainty.

There’s also something called Zoom Compose Assist. Panasonic says that when “the user loses sight of the subject at high zoom, at a press of the dedicated button, Zoom Compose Assist zooms out and quickly retargets the subject at the original zoom ratio.” I don’t think I’ve used such a feature before, so I’m keen to get my hands on one to try this out. With 400mm (35mm equivalent) of telephoto zoom, it sounds very useful.

And, of course, it’s pretty much compulsory for modern camera to have Wi-Fi and Bluetooth, so the Panasonic Lumix FZ1000 II most certainly has those.

Panasonic’s web page for this camera isn’t up yet, but when it is it should appear here.