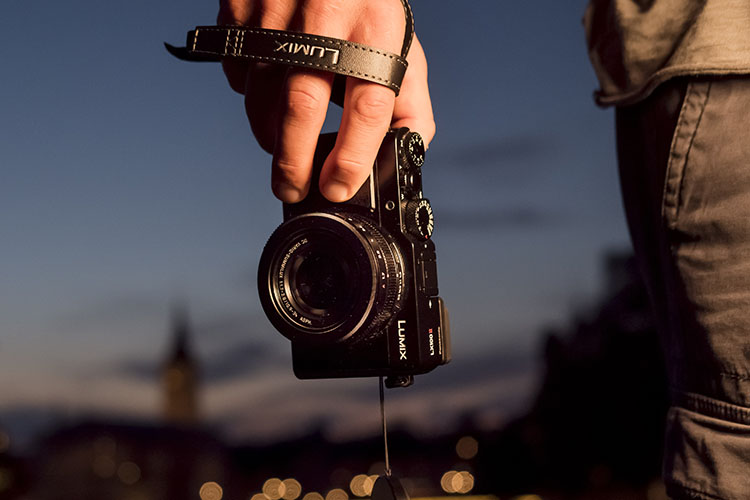 Getting ready to travel to Barcelona last week I had to decide which camera I was going to take. I had a choice of four. There were three interchangeable lens cameras and one fixed lens compact. I took the compact. It was the Panasonic Lumix LX100M2.

And I didn’t regret my choice.

The Lumix LX100M2 is compact, but not super compact. Pocketable, at a stretch, but it leaves quite the lump. With the lens cap in place, it’s a touch over 61mm thick over much of the body. But at the back the eyepiece protrudes by almost another 10mm. It’s 115mm wide, not counting the lugs for the strap, and nearly 67mm tall. It weighs a touch under 410 grams.

Still, all that’s a lot smaller and lighter than any interchangeable lens camera. That makes it an attractive proposition as a travel camera. But only if the picture quality and usability are up to snuff.

At this point I should mention the suggested retail price: $1,399. That’s not the usual pricing for a compact camera and suggests something a little special.

Let’s start with the sensor. In general, and within reason, the bigger the sensor the better. A typical compact camera, say the new Lumix DC-TZ95 on which we reported recently, has a 1/2.3 inch sensor. The Lumix LX100M2 has a 4/3 inch sensor, the same size (although clearly not the same model) as used in Panasonic Micro Four Thirds format cameras.

If you’re like me, comparing fractions doesn’t come naturally, so let’s turn those into millimetres. The DC-TZ95 has a sensor measuring 11mm. The Lumix LX100M2 has a sensor measuring nearly 34mm. That makes for higher native sensitivity for the panel, lower noise and easier-to-achieve shallow depth-of-field effects.

In front of that sensor Panasonic has used a Leica-branded DC Vario-Summilux lens. It has traded off a huge zoom range for other virtues. The zoom is 3.1x, from 24mm to 75mm in 35mm-equivalent terms. That takes it from a smart-phone-like wide angle to a modest telephoto but is nothing like the 30x optical zoom of some options.

The offsetting virtue is speed. The lens has a maximum aperture, depending on the focal length, from f/1.7 to f/2.8. That further improves low light performance. And the iris features 9 diaphragm blades, making for a rounder hole and, consequently, a more pleasing bokeh.

There’s a proper viewfinder with 2.7 megapixels of resolution. It includes dioptre adjustment, so most people should be able to have a sharp view through it. Like an interchangeable lens camera, it will sense proximity to switch between this and the rear monitor, but you can also choose to fix the image to one or the other.

The rear monitor has 1.2 megapixels of resolution and is touch sensitive, so you can do things like tap a spot for focus. It also supports pinching and swiping when you’re displaying photos or selecting from a set of images captured using 4K shooting mode.

(The 4K mode captures 8.3 megapixel images at 30 frames per second. You can use 4K Pre-burst, so that you can select frames from up to a second before you press the shutter release.)

However, one relative weakness of the Lumix LX100M2 is that the rear monitor is fixed. It doesn’t tilt at all, so the camera isn’t quite as usable when shooting overhead or from down low.

Another way in which the Lumix LX100M2 camera differs so very much from most compact cameras is that just about all the stuff you’d expect to do on a high-end camera you can do on this one. With reasonable convenience. Perhaps the weakest part is that zooming is by means of a “W/T” toggle around the shutter release. That means a certain imprecision in frame size.

Aperture is set by a ring on the barrel of the lens, with an “A” setting for automatic. There’s a dial on top for choosing shutter speed (with an “A” setting) and another dial for exposure compensation. ISO is set via the control arrow cluster.

You can choose manual focus by means of a switch on the lens barrel. The focus ring is smooth and focus assist via edge highlighting is on by default. Not on by default, but worth switching on, is AF+MF. This is the same as auto focus, but you can tweak the focus manually while on a half-press. That’s great for doing things like focusing on a bird, when the auto focus is concentrating on the twigs of the tree in front of it. Also on the barrel is a switch for several different aspect ratios.

Intelligent Automatic to the rescue

If you set the camera in “iA” mode – that’s intelligent automatic, in which it assesses scenes and tries to choose appropriate settings – all manual settings are overridden except for focus and exposure compensation.

There are also a number of assignable buttons.

But there was a problem. For a right hander like me, the only way to hold the camera without accidentally tapping a control button was with my thumb on the thumb-grip near the top of the back. It felt insecure, like I was merely pinching the camera. Grasping naturally with the heel of my hand wreaked all kinds of havoc on the settings. I ended up using the “iA” mode more than I wanted to, just so I didn’t have to go search through the settings to undo the accidental ones. I’m not sure how that could be fixed. There simply isn’t much room on the body of this camera.

There is no flash built into the camera. But there is a hot shoe and a tiny little accessory flash is included. That slips into the shoe and is automatically recognised by the camera. The camera powers this flash. The battery life of the camera is rated at around 340 images when using the rear monitor, and 270 images using the live viewfinder. The flash knocks a little more than 10% off those figures.

A Micro-B USB connection is provided for charging the phone and transferring photos. Photo transfer was rather slow using this, despite me using a fast memory card. It ran at about 12 megabytes per second. That was 10:20 minutes for transferring 1,080 photos (amounting to 7.23GB).

The typical size of a photo at the default settings was around 8MB. But you can choose RAW as well. They were usually a little under 19MB in size.

There’s also a micro-HDMI output and both Wi-Fi and Bluetooth, so you can use Panasonic’s apps to transfer photos or control the camera.

I relied entirely on the Lumix LX100M2 camera (and my phone) for my time in Barcelona. I used it for tourist stuff, but also for business.

For example, during the Huawei presentations, I was more than halfway back from the stage in a very large venue. I see that I took 222 photos throughout the one hour presentation, mostly of the large slides on the stage. More that half of them were razor sharp, utterly clear and clean, despite me holding the camera up high with one hand (trying to get over the top of everyone else taking photos). Maybe ten per cent were unusable because of focus. And then there were a bunch of accidental shots, taken as I was fumbling between camera and the computer I was using to take notes.

This one could present difficulties. It’s sunset in Barcelona, with the sun potentially flaring the lens badly. Yet it is kept under control, while the darker elements of the picture remain full of detail:

An exterior of the Sagrada Família Basilica by Gaudi. Sharp and detailed, as you’d expect given the excellent lighting conditions. And still under construction:

A couple of interiors the Sagrada Família by Gaudi. Note the eerie lighting as the sun pours in through the predominantly oranges and yellows of the stained glass. I tried some comparative shots with auto white balance, and with it set to sun light, and the differences weren’t worth the effort.

The interior of this 14th Century Basilica was reasonably well captured with automatic settings. On reflection, though, I would have done well to use exposure compensation to darken the image by a stop to better reflect the actual sense inside the church.

That said, it was easy enough to adjust that image in Photoshop to something quite reflective of the real thing:

I did use the exposure compensation dial to maximise colour capture of the stained glass windows:

Another challenge to a camera. The golden/brown bulk of the picture was of the ceiling of the 14th Century structure of the Cathedral of the Holy Cross and Saint Eulalia. But the much less aged early-20th Century addition was brightly lit. Yet all is revealed:

An accidental extreme. When I transferred the photos from camera to computer, I was puzzled how this picture could look so soft and lacking in detail. I checked the metadata recorded with the photos. Somehow I’d accidentally set the camera to manual aperture – a tiny f/16 – and shortest shutter speed – a mere 1/4,000th of a second. So, the camera compensated by pushing the ISO to its maximum of 25,600:

Scaled down, that doesn’t quite as bad as it really is. Here is a crop. Note, had I set the camera to capture RAW, the result would have been extremely grainy. What we have here is the post-processing by the camera trying to clean up the image:

Now, while that’s pretty terrible, the mere fact that something looking like the subject has been captured is amazing in the circumstances. But it also has something to say about the fast lens. You see, it would be rare circumstances indeed (outside of me messing up) for the camera to push ISO to anywhere near that level. Even the Basilica interior above, which I allowed to be overly bright, only went to an ISO of 800.

Panasonic’s page for the Lumix LX100M2 camera is here.