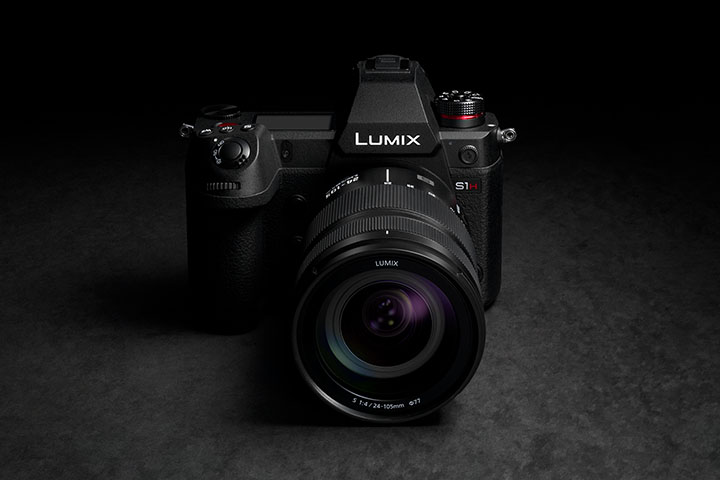 In March we reported our experiences with Panasonic’s first full frame cameras, the S-Series. Now it has followed up with the Lumix S1H, launched yesterday at a weirdly entrancing venue in Marrickville, Sydney. Another full frame camera, the Lumix S1H one is a significant re-design with the needs of cinematographers in mind.

At this point I should be listing features. But there’s no way I’ll be doing that comprehensively. I suspect a five-thousand-word coverage would be too long. So, I’ll just touch the high points.

First, even though the Lumix S1H is heavily focused on high-end video work, it’s still a fine camera for stills. The 24.2 megapixel full-frame CMOS sensor employs a low pass filter optimised for cinema. There’s something a little special about it: it has two native ISO ratings. ISO is kind of like the natural sensitivity of the sensor (or film in the old days). If you push a camera into a too-high ISO rating, there’s an increase in random noise in the picture – grain, if you like.

The Lumix S1H has two native ISO ratings. Apparently, this is achieved by having the sensor feed two different signal paths. I’m not sure how that affects it. Nonetheless, the various testimonials offered at the launch event made it clear that photographers would get the same low-noise performance from both native ISO settings: ISO 640 and ISO 4000.

Of course, the higher the ISO rating, the less light required. That allows smaller apertures and faster shutter speeds.

The first couple of Lumix S models abandoned the incredibly versatile fold-out rear monitor provided on the Panasonic GH cameras, substituting a more conventional tiltable monitor. The Lumix S1H returns to the fold-out model, but puts it on a hinged section so it also tilts out at the bottom. Almost the best of both worlds.

Meanwhile, the 5.76 megapixel live view finder is retained from the earlier Lumix S1 models. It provides a superbly sharp image. That makes it easier to focus.

There’s also a status display on the top right of the camera. A huge one, 1.8 inches in size. This can obviously provide a lot of information about camera’s settings. And it can do much of this when the camera is off, thanks to “Memory in Pixel” technology.

That was a new one on me, so I looked it up. It seems that these are LCD displays with integrated 1-bit storage for each pixel. They still require power, but far less than one per cent of the amount of a regular LCD display. Presumably you can switch this off if you need to eke out the battery contents.

There are two slots for SDXC cards, both supporting the super-fast UHS-II bus. For increased reliability and security, you can set your shots and video to record to both cards at the same time.

The Lumix S1H supports up to nine frames per second of burst shooting. The shutter is rated at 400,000 operations. And should 24-ish megapixels be insufficient, you can use the pixel-shifting 96-megapixel mode.

So, now, let’s look at some of the cinema functions. First, there’s sheer capacity, by which I mean the amount of data that can be handled. In general, one can have more resolution with any imaging device, but at the expense of other data-consuming elements, such as the number of bits. The Lumix S1H has an extremely high in-camera capacity.

If you use a smaller crop to match the recording resolution, the camera can go all the way up to 60p at both Cinema 4K and UltraHD – again with 10 bits but at the lesser 4:2:0 colour resolution.

Most of the resolutions use 100Mbps or higher streams. A couple go as high as 400Mbps.

And there are variable frame rates and high frame rates of up to 120fps for 1080p. The former allows some pretty impressive high-resolution slow motion. With high frame rate recording, sound capture still works.

And all that stuff is for recording to an inserted SD card. No need to add an external HDMI recorder.

After a while, video devices have to stop to cool down. But the Lumix S1H includes a cooling fan so it can keep going indefinitely if fed by external power, and up to two hours on its own battery. Despite the active cooling the unit is still weather resistant.

Of equal use for both still and video work, the Lumix S1H features Dual Image Stabilisation in five axes allows up to 6.5 stops of more freedom from shake.

And it has modes. The first time I came across image stabilisation was in a smart phone and it was a real problem. As I tried to record video, panning across a scene, it became a stop/start mess. The stabilisation (which couldn’t be defeated) resisted movement of the scene until it got too much, then the image would snap across to the next position, whereupon the resistance would resume.

Of course, you can switch off stabilisation in the Lumix S1H. But it also has a regular mode which allows for smooth panning, and a locking mode in which the stabilisation tries to stop all movement.

And it has several modes for anamorphic lenses.

Okay, anamorphic lenses are things that were frequently used with the advent of widescreen films in the 1950s. They squeeze the optical image into a narrower shape. That allowed the full resolution of a film to be used, instead of a mere band across the middle of the frame. In the cinema a reverse-anamorphic lens would be used to widen the image, restoring the correct proportions.

Are you ever likely to use such a thing? I think I can say with confidence: almost certainly no. But this kind of attention to detail shows how much Panasonic consulted with professional cinematographers. Seemingly, if they wanted it, they got it.

Of course, the camera has a highly competent autofocus system. But it also has stuff that appeals to the video maker. One that was particularly impressive was the ability to “memorise” two or three focus points, and then have the camera smoothly slide from one to the other. Several speeds were provided. That’s a cool feature that would, until now, have required a cinematographer with enormous experience to pull off.

What else is there? V-Log/V-Gamut recording allows more than 14 stops of dynamic range. Custom Look Up Tables convert this to a desired end result.

The launch event was conducted in the weirdly hypnotic premises of the Sydney Prop Specialist (“Prop” being movie props – there were Game of Thrones thrones, phone boxes, Elvises, Spocks, swords and TV sets from all eras). Cinematographer Clinton Harn showed us what the Lumix S1H could do. There was a carefully lit drama scene, and a wild, brightly lit dance scene, and a very darkly lit rock group.

He slow-moed, and hand-held in the low light, and zoomed point of focus and did it all quite effortlessly.

And he raved about how easy it was to do it all with a light-weight device such as the Lumix S1H.

Panasonic is pushing hard to complete the Lumix S-series ecosystem, and plans to have 46 lenses available for it by the end of the first quarter next year. Along with the S1H, it announced a new Lumix S Pro 24-70mm f/2.8 lens ($3,599).

Panasonic’s site for the Lumix S1H is here.