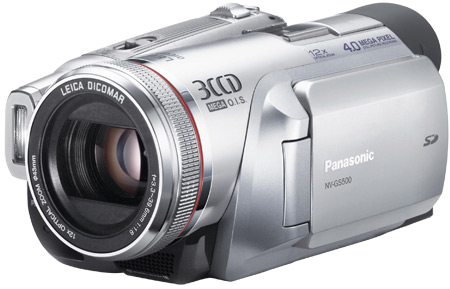 In late 2004, the Panasonic NV-GS400 hit the market to rousing applause and universally good reviews. When its successor, the NV-GS500 arrived, the expectation was that this model would lift the bar higher, writes Frank McLeod.

The GS500 is a smallish compact camera, weighing in, with battery, tape, lens cover and strap at just short of 700 grams. It features a Leica Dicomar lens with a focal length of 3-39.6 mm and f-stops rated at 1.6 in the wide angle position and 2.8 using the 12 x optical zoom. At a recommended price of $2,199, this places it at the higher end of the available camcorders on the market, and one would assume, aims it at the enthusiast.

So how does it shape up, considering the GS400, its predecessor, has such a lofty reputation?

The GS500 has 3 CCDs as the light receiving components, each 1/4.7 inches in size, giving an effective pixel count of just over two million. Of particular note is that, unlike most consumer camcorders where the reverse happens, the GS500 in 16:9 mode adds in pixels at the side of the image to increase the pixel count for each CCD from 690,000 to 710,000.

The GS500 can take 4 megapixel still shots on an optional SD card and in VGA resolution, can shoot ten still shots at 0.7 second intervals. There is an inbuilt ‘video flash’ – which has absolutely nothing to do with video – and, unlike many other camcorders now available, an automatic lens cover has been omitted in favour of a stock standard lens cap.

Access to items that might be required while shooting, such as back light, soft skin tone, telemacro, iris and shutter speeds (in manual settings only) is obtained by pushing a joystick button next to the record/pause button on the rear panel. This brings up a display on the LCD screen that can then be scrolled through using the joystick control. There is a focus ring that functions only in the manual mode and has to be selected specifically when in that mode. Finally, the GS500 has an ‘anti-ground shooting’ switch to avoid recording for posterity the fact that you don’t clean your shoes.

Unlike the majority of MiniDV camcorders on the market, the GS500 allows you to capture DV either via the Firewire/IEEE1394 port or an inbuilt USB 2.0 port. Other connections include an AV output socket and jack for an external microphone or the freestyle remote controller. Note there is no headphone jack – a major omission for any person serious about their audio in film-making.

The layout is fairly standard on this camera and highly reminiscent of the Panasonic VDR-D300GN. However, I found the GS500 to have a ‘stocky’ feel to it, and to be quite ungainly in the hand, in large part due to the position of the hand strap. The camera, which in cross section is almost square, has the strap at the absolute bottom edge of the right-hand side (when viewed from the back). This impedes access to the menu, joystick and pause/record button and should you let go your grip, the camera falls down, pivoting around the strap attachment points. While Panasonic is of the view that this arrangement supports one-handed action, I have to disagree, finding it quite clumsy.

The focus slider, backlight and reset buttons are revealed on opening the LCD panel. All the controls are concentrated at the rear right-hand top corner of the camera and while easily reached by the right thumb and index finger, when the camera is supported by the left hand, single-handed use is a lot more problematic.

The zoom control is closest to the front and the rate of change varies with the degree of movement of the control. Behind the zoom control is the still photo button, just in front of the power on/off sliding switch which is protected from accidental movement by a small position-lock button. The core function menu button is immediately below and then, a couple of centimetres further down, the record/pause button sits beside the joystick which is surrounded by the rotating mode selection control.

A feature that Panasonic is incorporating more regularly in its consumer range is the top-loading tape bay, a major benefit when using a tripod. However, the in-built angulation of the top right-hand side of the camera body, promoted as a positive feature in this camera, is certainly something I could live without, finding that it made the camera awkward to hold, and in conjunction with the poorly placed strap, saw me using a two-handed approach more than I might have liked.

My index finger fell naturally on the still image shutter release button, but it required a conscious effort to get it to the zoom control. I checked this with my smaller-handed proof reader and she made the same comments, leading me to wonder if this is all just marketing spin put on a shape modification required to accommodate the camera?s internals.

The focus ring at the front of the GS500 is activated by using the slider switch that lives under the closed LCD monitor; activate once to select manual mode and then again to select manual focus. A focus ring is always a plus, but it would have been nicer if its action was direct enough for practical rack focusing (the changing of focus from one subject to another while shooting). As it takes a lot of movement to come from distant focus to close, using it for a smooth rack focus effect is just not achievable. Manual control of other functions, where present, is achieved using the menus and controls activated by the joystick.

Because the 2.7 inch LCD monitor has an aspect ratio of 16:9, it appeared small to me; when shooting in 4:3 mode, vertical black bars appear at the sides of the image giving it effectively a 2.25 inch viewfinder screen. The electronic viewfinder (EVF) is adjustable in angle and focus and – a sensible touch – the eyecup is removable for cleaning.

Sadly, missing from the GS500 are any on-camera playback digital effects, editing functions, manual zoom, AE lock, colour bars and exposure zebras. The corded ‘Freestyle Remote Controller’ with its record/pause, zoom control and photo shot functions, is handy when the camera is on a tripod, but unfortunately it plugs into the external microphone socket, precluding the use of an external microphone. In earlier models, this controller also included a narrative microphone but this is no longer the case.

Also noticeably lacking is a digital pass-through ability, to convert analog video to digital. This is something that the potential purchaser might get to miss at some stage and is worthy of note as it removes the possibility of digitising old VHS tapes for transfer to DVD.

The GS500 takes lovely images, as is to be expected with its 3CCD setup. The colours are bright and the resolution such that the viewed image is clear and sharp. Using the telemacro function, a close-up image of two adjacent keyboard keys takes up the full width of the 4:3 viewfinder and the focus can be finetuned manually if necessary. It might irritate some that even when using the EVF, the LCD screen has to be unfolded to turn manual focus on or off.

As mentioned, tripod use is made easy by both the top-loading tape and the freestyle remote control (accepting the loss of the external microphone). This became more of a loss than was immediately apparent though, because while the internal stereo mic records great sound it is sensitive enough to pick up the motor hum. While this sensitivity is adjustable in the menu settings and may reduce the intrusiveness of the noise, it doesn’t give anywhere near the result as an aftermarket shock-mounted mic, such as a Rode VideoMic, sitting in the hotshoe.

Panasonic has its own optional microphone for the hotshoe, which would be expected to eliminate or at least markedly reduce motor noise, but a problem, albeit minor, with this type of brand-specific purchase is that the microphone will not usually cross from camera to camera if you decide to upgrade.

The software disc contains the USB driver to enable USB 2.0 capture using one of the two proprietary programs supplied. The first program, Sweet Movie Life, is an extremely low-end capture, add-title-and-music program, which does little true editing; the other, MovieStudio DV LE for DV video, does all this and a (little bit) more. For a consumer camera running at over $2,000, I would have thought that rather than trying to re-invent the wheel, Panasonic could have licensed a light version of an existing editing package, rather than include these two very underwhelming programs.

I can’t see the reason for lauding USB capture, but if you intend using this capture mode it might better be done using the proprietary software. When I tried USB capture with both Ulead’s Video Studio 10 Plus and Media Studio Pro 8, the programs both identified the source as a 720 x 480 NTSC device prior to capture! As it happened, it captured nicely with normal PAL parameters but I could not be totally confident in what was happening. This conundrum did not occur with a Firewire capture.

However, when I tried to export back to the camera using USB, the Ulead software objected, again identifying the camera as NTSC.

There is no doubt the Panasonic NV-GS500 is a nice camcorder, priced at an acceptable level and will make a lot of people happy. However, I don’t think it’s a genuine replacement for the GS400 model and certainly not an upgrade. It takes great images but is surprisingly limited in additional features for a 3CCD camcorder priced at the upper level of the consumer range.

Suffice to say that people who missed out on the GS400 will be disappointed by the GS500. Perhaps Panasonic should have introduced another model identification scheme so as not to suggest this model is an advancement on the GS400.