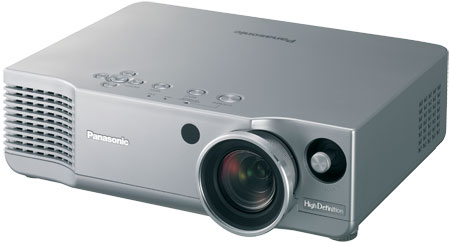 The new PT-AE900E home theatre projector is a rare breed indeed. It’s the evolution of a long line of models from Panasonic, and has benefited from Panasonic’s hard won experience in projector design. As such, it just keeps getting better and better, to the point where its current is a definite for the home cinema enthusiast.

Generally, the characteristic of a projector that has the single biggest impact on projector performance is resolution. The more dots the better. Here the Panasonic matches or exceeds every projector in the sub-$10,000 price bracket, and most in the sub-$40,000 bracket, with its 1,280 by 720 pixel resolution.

When it comes to picture smoothness, the projected image is broken up into perceptible dots, which can destroy any sense of reality in the video. One way of avoiding this is having high resolution, which this projector does. But another is eliminating the screen door effect. The PT-AE900E projector uses three LCD panels to generate its picture, and LCD panels are inherently more prone to creating a screen door effect than DLP. So it was startling how well Panasonic has totally eliminated the screen door effect with this projector. The picture was supremely smooth, as good as any I have seen short of the Sony? legendary $40,000 Qualia projector!

Another weakness of LCD projectors is their inability to produce truly deep black levels, since some light always manages to leak through, especially when the image being projected is mostly black. A typical LCD projector contrast ratio is a rather tepid 1,000:1. Panasonic claims 5,500:1 – could this be a lie?

All I can say is that this projector produced the best black levels I have ever seen from an LCD projector, regardless of price. The trick Panasonic uses is a ‘dynamic iris’, which is a pair of motorised flaps that turn, in response to overall picture light levels, to restrict when necessary the amount of light emerging from the lamp. This worked extremely well. I should add that if you have the sound off, you can actually hear a quiet, muted thud if the picture turns quickly from bright to dark or vice versa as the flaps turn. But this was not noticeable in normal use, and indeed the fan noise of the projector was very low.

In terms of inputs for connecting the PT-AE900E to your other AV components, if you have a signal, Panasonic will support it. Composite, S-Video, component video, computer, HDMI and SCART are all included. And if you want a projector to fit your room geometry, rather than make the room fit it, this is the one for you. It has a huge zoom range of 2:1, and a lens shift (both horizontal and vertical) so that even if the projector is off centre, it can be quickly set to produce a distortion-free image right on the screen.

Of course, there are some differences between this projector and your typical $15,000 model. Consider widescreen detection. DVDs can carry their signal in either 4:3 (standard) or anamorphic 16:9 (widescreen enhanced) aspect ratio. To look right, the display device has to be set to 4:3 or 16:9 to match (unless you’ve got a regular TV and use an RGB, S-Video or composite video connection.) Most widescreen TVs, on the other hand, will detect the incoming aspect ratio and set themselves appropriately, although almost none do this with signals transferred via component video.

Yet projector manufacturers routinely fail to include this detection facility. So if your DVD has special extras that are in 4:3 format, you have to reach for the remote to change the aspect ratio. This projector is an exception to that rule. Let’s call that a super exception. Because this works not only on the aforementioned input connections, but on component video (interlaced only) as well! This is a rare convenience.

The PT-AE900E also boasts an excellent universal remote control capable of controlling the other equipment in your system.

The first of these is with de-interlacing performance. While most films are inherently progressive scan (the two fields that constitute a frame are already aligned), much TV video is interlaced. That means that the two fields were captured a fiftieth of a second apart, so they don’t line up precisely if anything is moving in the picture. Projectors detect this and correct it. This projector was a touch slow to do this sometimes, occasionally leaving a couple of seconds of ‘combing’ (where there are short lines extending to either side of hard moving objects, or some break-up of a newsreader’s lips). Then it would detect the image source properly and correct this, but it did take away from the pleasure just a little. This also happened with 1080i HDTV signals (to the point where I set the high definition receiver to convert the output to 720p and it did a better job of de-interlacing).

I should add that the performance here was not much different to some $15,000 projectors equipped with highly regarded Faroudja DCDi electronics, but I have seen others do it better.

Finally, I was somewhat dissatisfied with the default colour settings. This seemed to produce a slight yellow-green cast over the image. Fixing this simply meant running through the THX Optimizer option on one of the many DVDs that carry it – something you ought to do with any new display device anyway. This quickly brought the picture quality back to a proper neutrality. Each input maintains its own settings, but it was easy to change these once the adjustments were made. I simply saved my settings in one of the three Memory Blocks provided, then loaded them in with the other inputs selected.

If this projector were selling in the $10,000 to $20,000 range, I would call it comparable to the range’s other occupants. Given that it sells for $3,899, I can do nothing other than call it brilliant, and wholeheartedly recommend it.