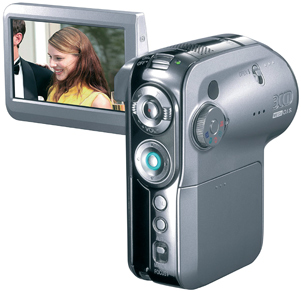 You’d think with so many letters and numbers and possible combinations thereofÂ – not to mention the probable audacious sneak looks at their rival’s marketing plans – Panasonic (or Sony) would have picked a more distant model number from their competitor. I wonder, how many camcorders are going to be returned at Christmas because although Mum, Dad or Aunt Agatha dropped the hint about the model they wanted, things became confused in the translation.

Apart from the model number, there is, however, no similarity between the Panasonic and Sony offerings. The Sony has a hard disk for storage and the Panasonic uses memory in the form of an SD card; the Sony is larger, built in the conventional camcorder style while the Panasonic is quite small in comparison and of the ‘upright’ type in design.

In truth, they are aimed at totally different markets.

The Panasonic is, at first glance, a strange sort of animal that is probably not quite sure what it is. The specifications are relatively high, with the three CCDs, a Leica Dicomar lens with widescreen (16:9) recording mode, an optical image stabiliser and Panasonic’s fabulous Crystal Engine. The optical zoom is only 10x, but that is hardly a drawback.

The reasons why I think the S100 is not sure of its identity are twofold.

By design, this camcorder is meant to be carried in a handbag, backpack or briefcase as it is quite small – half the size of an average person’s hand – and weighs in at only 240-odd grams. Great for portability, and there is a fast 1.5-second switch-on time so while instant action capture is virtually impossible, this is still respectably quick. But, the S100 shoots MPEG2 mode to an SD card – no tape, no hard drive – just a supplied 2GB card.

Now, I know many people have queried our stance in general on the MPEG2 format being mistakenly accepted as a format as good as AVI from tape for editing purposes, but this is not about that. Sure, I am not totally accepting of MPEG2 formats in general, but to have this format in a camcorder that has a price tag of over $2,000 ($2,199 to be exact) seems strange to say the least.

With the S100, it seems that Panasonic has determined a market for small and compact camcorders. Well, Sony had a swag of these types of models onsale around this time last year, and they have all gone from its range. You’d have to imagine that Sony’s market research said that consumers don’t want a camcorder of this topography, hence them dropping the style. In fact, only Panasonic persists in this layout (unless you count the Samsung Miniket, which is a whole different ballgame in reality).

Okay, so is it the three CCDs? Could be, but using three CCDs and a top-of-the-range Leica lens to capture MPEG2 to an SD card also seems odd and overkill, especially when the maximum resolution is only 704 x 576.

This makes the SDR-S100 a bit of an expensive hybrid, I think, that while it does the job for which it was designed, I cannot really see a market for it at this price tag. Even if it did store to tape, it remains expensive; as expensive as Panasonic’s own top-of-the-range bells-and-whistles GS500, which offers far more features and greater flexibility.

Now that we have the ‘scratch our head over the marketing department’s strange plan’ part out of the way, let’s look at the S100 in technical depth.

As mentioned, it has a Leica Dicomar lens good for F1.8 (wide) to F2.8 (tele), with a focal length from 3.0 to 30mm. The three CCDs are each 1/6th of an inch giving a total pixel count of 240,000 which is effectively 189,000. Minimum illumination is 1 lux, but I can tell you, in low light as expected, it was struggling a tad. This level is good only for shots of non-moving objects, such as a baby sleeping.

The focussing system can be either auto (AF) or fully manual; the manual system using a small circular button that, pushed left or right, lets you bring the subject into focus.

Likewise, the iris and shutter speeds are either auto or manual, and this same circular button again comes into play; pushing it up changes to shutter speed mode and then again left and right alters it accordingly. Similarly, pushing it up a second time switches to aperture mode, and the same actions apply. The system is inherently simple to use, but the ergonomics of it will defeat many people with average or larger hands.

Shutter speeds range from 8 seconds to 1/2000 of a second in video mode, and if using the S100 as a digital still (3.1 megapixel to the SD card) available shutter speeds are 1/25th – 1/2000th of a second. In auto mode, you have the option of choosing from Sports, Portrait, Low Light, Spotlight and Surf and Snow modes.

At this price point you’d expect all the major suspects to be there in terms of connectivity and gee-whiz functions, but not so. There are absolutely no digital effects in-camera at all (probably a good thing) but also there is no standard external headphone or mic jack. There is a ‘multi’ port that requires the use of a special cable to attach headphones (more bits to lose is my thought) and this port also acts as the connector to a TV/VCR.Â  A USB port is present for data transfer and the final connector is for DC 9.3V input.

The LCD screen is 2.8 inches giving a pixel count of 200,000. It can swivel through 180 degrees and also back on itself, or lie flat against the body of the S100. Conditions on testing day were overcast in part but glarey, and the LCD could be comfortably seen while outside shooting, without having to shade it. A big plus.

Finally, when in still camera mode, there is a pop-up flash, but this cannot work in video mode and there is no hotshoe for an external light (or mic). The S100 is PictBridge compatible – another bonus – but its still image possibilities are thin on the ground; it is a mainly point-and-shoot single photo beastie in this mode. This is not a criticism as we have always maintained that camcorders should be used to take video and digital still cameras to capture digital stills. The fact that many can do both is a convenience, rather than a performance, feature.

One nice feature of the S100 is the general ergonomics in terms of body shape. Its ‘stand up’ design means that it can be used happily by left- or right-handed users, which cannot be said for the majority of camcorders on the market. There is no viewfinder, however, meaning that to do anything, the LCD flip-out must be open and this of course compromises battery life.

I would have preferred more of a pistol-grip shape to the body, as the very rectangular shape does not lend itself to handheld steadiness, and this design minimises the ability to lock your hands around the S100 as you can a conventionally designed body. A record on/off toggle on the front of the body would also have been useful I think, further enforcing the pistol grip idea.

However, the more I played with the S100, the more I got the impression that it might be aimed at the upmarket lady executive type to whom the shape of Colt 45 might not be appealing. But then again…

The SDR-S100 is an enigma. It has all the major technically ‘good bits’ that a top-of-the-range camcorder should have – external mic access besides – but its reliance on an SD card and MPEG2 lets it down.

And then there is that price. If my guess is right and it is aimed at upwardly mobile females, who want a camcorder that is portable, fast to start and with 3CCDs onboard, then I think Panasonic needs to add different finishes to the range to enable greater choice. But then again, Sony did that with its DCR range and, as mentioned, that no longer exists.

One cannot help feel that while the S100 has a lot of engineering cleverness, the marketing department were perhaps out to lunch a little too long that day. Shame, really.