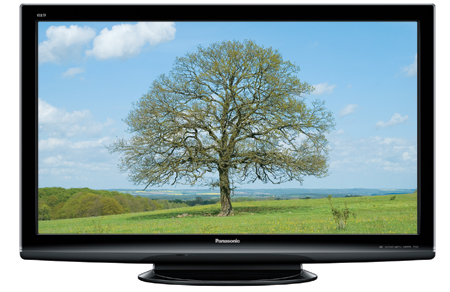 This review of the Panasonic TH-P50X10A plasma TV was as part of a collection of 5 reviews for the article Eco TVs – how green is your TV?. The 5 reviews have been gathered together in the article 5 eco TVs tried and tested.

This TV uses Panasonic’s ‘neoPDP’ technology, which roughly doubles brightness for a given amount of power input… or roughly halves the power required for the same brightness.

Still, this is a plasma TV – and a lower resolution 1366 x 768 pixel model at that – and these still chew more power than LCD, even though much less than earlier model plasmas. It consumed 237 watts, compared to 551 watts less than two years ago with a then current 50 inch Panasonic TV!

The misleadingly named ‘Eco Mode’ picture setting should be avoided. It noticeably brightened the picture and power consumption increased by 30 percent! Consulting the manual showed that ‘Eco Mode’ doesn’t have much to do with economical or ecological operation. What it does is allow the TV to adjust itself according to ‘ambient lighting conditions’. In a dark room, the reverse probably would have happened: the brightness would have reduced, along with the power consumption. The results are too unpredictable to rely upon.

Under the Setup menu there was also a ‘Power Save’ setting which, according to the manual, ‘[r]educes brightness of picture to minimise power consumption’. This made no measurable difference with the standard test video, nor with static displays.

However, if you are using other recent Panasonic HDMI-connected equipment, you can take advantage of useful features such as ‘Intelligent Audio Standby’, which switches off a Panasonic Blu-ray or DVD player when the input is changed to something else, or ‘Standby Power Save’ which reduces a Blu-ray player’s standby power consumption from the 5-plus watts of ‘Quick Start’ to the less than 0.5 watts of regular standby.

I’m not likely to recommend this TV to readers here because of its lack of full high definition resolution – something from which a 50 inch TV really benefits – but within its limitations it does a great job on picture performance. However for ultimate power saving, LCD is clearly better.