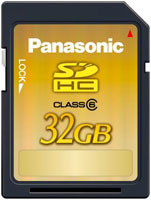 Panasonic is set to release the world’s first 32 gigabyte (GB) SD high capacity (SDHC) memory card with Class 6 speed specification. With a global roll-out from April 2008, the new SDHC memory card, RP-SDV32GG1K, is perfect for those wanting high definition content as it can record up to 12 hours of high definition video. The new SDHC memory card will be available in Australia in May. Pricing will be announced closer to the release date.

The newly developed card, featuring a massive 32GB of capacity is ideal for AVCHD high definition video recording, a growing demand thanks to the recent expansion of high definition SD card camcorders.

The card is also equipped with a new user-friendly labeling feature, which allows users to write titles or comments directly onto labels on the front and back of the card. Panasonic will introduce the new labeling feature in its other SD Memory Card models, with a running changeover from the current card designs.

The new card, like all other Panasonic SD and SDHC memory cards, is extremely reliable even under severe temperature conditions. Since the cards incorporate an industrial-grade flash memory, they work in temperatures ranging from -25 degrees C to +85 degrees C, while consumer-grade flash memory only guarantees 0 degrees C to +70 degrees C, thus ensuring consistent performance regardless if the user is skiing or if the SD memory card is left in a hot car.