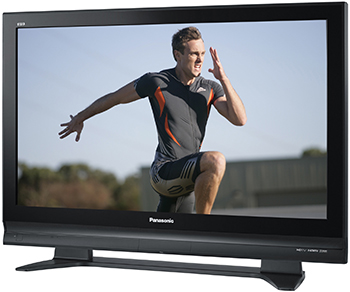 Unlike a number of other manufacturers, Panasonic hasn’t thrown its lot into the LCD camp entirely. It is a firm believer in LCD for smaller TVs (under 100cm), and plasma for larger ones. Such as this 106 cm model, the Viera TH-42PX70A.

The TV features a standard plasma resolution for its panel: 1,024 by 768 pixels. It has both analog and high definition digital TV tuners, and most importantly it has two HDMI inputs.

There is a set of A/V inputs (including S-Video) not on the side, as with most TVs, but conveniently on the front under a fold-down panel.

The TV has Panasonic’s Viera link built in. This allows the TV to exercise basic control over HDMI-connected Panasonic products, such as home theatre receivers and DVD players, so that these need not be in sight in your room.

On first switch-on the TV asks you to select your State, and then immediately conducts a scan for digital and analog TV stations. The first was unsatisfactory in my area, because I receive one station from two different transmitters. The one with the lower channel number has a weaker signal than the other, but this TV chose that one, and then refused to add the other station. Even when I tried to manually tune it later, it regarded it as a duplicate and would not accept it.

In the end, I performed a factory reset, immediately cancelled out of the automatic scan and manually tuned all the stations in order to resolve this problem.

The TV supports 1080p (progressive scan) signals at our own 50 hertz and the US system of 60 hertz. Although it doesn’t say as much in the manual, it also proved capable of displaying 1080p24 signals, but it failed to gain any increase in smoothness from these, and the HDMI sound from a Blu-ray player didn’t work when the signal was in this mode.

The colour performance was absolutely brilliant – as good as it gets, and amazingly natural. And the black levels were equally good. Want to watch a movie in a dark room? No problems with this TV. Low light detail was excellent as well. And motion – every very fast action – on the screen retained exceptional sharpness.

The scaling of video to the screen’s resolution was also excellent. Less impressive was its deinterlacing of standard definition video. This failed to detect film-sourced material, so it used lower quality video conversion which introduced occasional artefacts and some jaggies. You’ll get best results for DVD playback with a high quality progressive scan player.

Incidentally, if you are keen on using a high definition PVR with your TV, why not consider Panasonic’s TH-42PX7A plasma TV. It appears to be pretty much the same as this model, but omits the HD tuner, saving you $350.

But if you want a high quality out-of-the-box TV experience without the need to add anything, then the Viera TH-42PX70A is a very good place to start. And with Panasonic’s big-brand backing, and a remarkably low selling price, it’s a bargain.