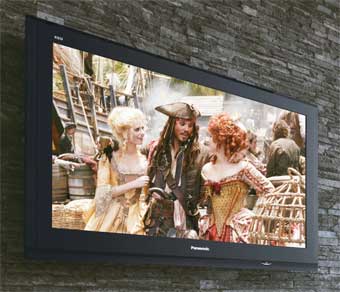 Last year the world of true high definition panel TVs seemed to belong to LCD. Sure, there were a couple of 1920 x 1080 pixel plasmas available, but they cost well over $10,000. No longer, though. The Panasonic TH-50PZ700A plasma TV offers every one of those pixels, has a mighty 127cm of screen size, yet costs just $4,099.

This TV has plenty of support for its true high definition plasma panel. First, there is a high definition digital TV tuner (plus an analog one – and good integration of the two). Second, there are three HDMI inputs, including one on the front panel, plus a good range of analog inputs.

Also nice is the Secure Digital card reader, especially if you have a digital camera or one of the rare HD camcorders that uses this card format.

The digital TV tuner implements all the digital features available, including an excellent EPG. The sound receives both a tweeter and a woofer for each channel, along with SRS TruSurround, and there’s an optical digital audio output so you can plug the TV into a home theatre receiver for even better sound.

One thing that deserves special mention with this TV: when you first switch it on and it goes into autoscan mode for TV stations, it does both digital and analog tuning at the same time. Very clever, and faster than the competition.

Initially the colours were horrid with this TV, but that was thanks to the default ‘Dynamic’ picture setting. A quick flick through the menus had this back to a proper ‘Standard’ setting, and suddenly they were glorious. The colour graduations were smooth, the colours themselves were rich where required, and natural in human faces. Simply lovely.

There were a couple of aspects of performance which were rather disappointing for 2008. Don’t get me wrong, most people will enjoy this TV immensely, but those who want the ultimate in performance from their high definition TV may find this unit lacking.

First, according to the TV’s specifications, there is no support for the 24 frames per second version of 1080p. This is the only way to get really smooth playback from HD DVD and Blu-ray, so with this TV you’re stuck with a slight jerkiness from the great majority of movie discs.

Second, the scaling of video from 576i inputs, such as DVDs, standard definition digital and analog TV, was quite poor (we test this over HDMI, so the problem wasn’t the source). It was okay vertically, but tended to smear the image horizontally. It was one of the worst TVs I’ve seen on this front for quite a while.

Third, deinterlacing of 576i material (from DVDs, for example) was also poor, with marked artefacts on many scenes.

The Panasonic TH-50PZ700A provides most of what we want in a true HDTV. Its colour is great. We can easily overcome the scaling and deinterlacing issues by using a high quality upscaling DVD player. The only real let-down for me is the lack of 1080p24 support. My eyes are very sensitive to 1080p60 jerking from Blu-ray.