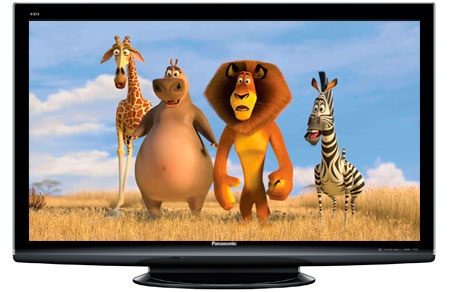 With the departure of Pioneer from the TV game, Panasonic is now the go-to company for the best plasma TVs. Especially now, with its new ‘neoPDP’ Viera range.

As the name suggests, this range features a newly designed ‘plasma display panel’. This delivers a number of enhancements, including increased contrast, but primarily increased “luminous efficiency”. Panasonic says that this is double that of the 2007 models, reducing power consumption markedly, without hurting picture quality.

It also has a ‘600 Hz sub field drive’. This is too complicated to explain in depth here, but I will note that plasma TVs deliver their images as an extremely rapid series of pulses. Panasonic’s new process ups the speed of these pulses for improved responsiveness and dynamic contrast control.

The particular model reviewed here is the 127 cm (50 inch) Viera TH-P50G10A. This features a full high definition digital TV tuner, supplemented with an analog one, but no PIP to take advantage of the twin tuners. There are three HDMI inputs, including one on the side for convenient access.

The TV has a Secure Digital card slot that you can use to display photos from your digital camera. However unlike LCD TVs, it would be unwise to use this TV as an enormous photo frame, since static images are likely to eventually produce some plasma ‘burn in’. However this TV also supports AVCHD playback from high definition SD-based camcorders, which would be welcome for those with such devices.

It is provided with a desktop stand that allows a modest degree of side-to-side swivelling.

One weakness of previous Panasonic plasmas has been the reflectivity of their glass panels. Basically, too reflective for my taste. The best picture in the world is no good if you can’t see it due to reflections on the glass. This model preserves the glassy, smooth look of the older models, but with a new antireflective treatment that reduces those reflections significantly. The treatment hasn’t gone so far as to cause reflections to smear across a broad area of the screen, so this TV has about the best performance I’ve seen in this regard.

The black levels from the TV were excellent. I used a test Blu-ray disc that features some bright and colourful images in small areas of the screen, leaving the rest fully black. This TV did a great job with these, with a lovely inky blackness in those unlit parts, while the bright section shone forth.

The colour itself was superb. I still think that, good as LCD is getting, plasma colours offer that final one per cent of accuracy to nature, especially with grass greens and outback browns. This TV was simply glorious.

The motion handling was variable. With plasma’s typical precision in delivering each film frame cleanly, there was never any smearing of the image, no matter how fast the football was kicked. Panasonic has included what it calls ‘Intelligent Frame Creation’, which I would have thought to be some kind of interpolation system to smooth motion. If that’s what it is, it did very little. My usual Blu-ray disc tests revealed no increase in smoothness of motion, and surprisingly, the result was the same for my test DVDs.

I for one don’t mind because I prefer to see the picture provided from Blu-ray or DVD as it is, not artificially (and by definition, inaccurately) enhanced. However if you prefer the glossy look to video produced by such processes, you won’t be getting it here.

As for the stated efficiency boost, I found that the TV in ‘Normal’ mode actually used just 56 percent of the power required by its 2007 predecessor, with no apparent loss of brightness or colour. That’s what gains it a two star label (out of a top-rated six) on the forthcoming TV power rating scheme.

Perhaps the most extraordinary thing about this TV is that it sells for well under $4,000, which sees it beat most of the higher quality LCD TVs in the price/performance stakes.

This is truly a fine TV, and well worth considering if its size meets your needs.