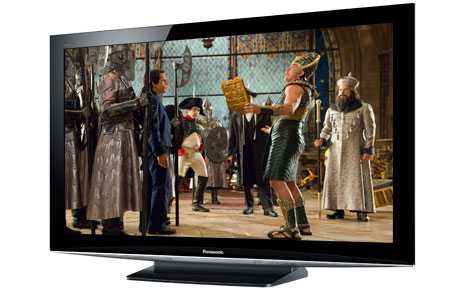 It can be a bit difficult to compare plasma TVs with LCD TVs, simply because there are few sizes shared by both. For the moment, mainstream LCD TVs top out at 140 cm (55 inches), and most of the leading models range from somewhat to very much more expensive than this massive 147 cm (58 inches) plasma TV from Panasonic.

Unlike some of the competition, the Panasonic Viera TH-P58V10A plasma doesn’t include networking (Panasonic seems to prefer putting that feature in its source devices). Nor does it have built-in recipes, or artworks to turn the TV into an active art gallery.

What it does have in the way of advanced extras is an SD card reader that supports AVCHD video files (the format used by Panasonic card-based video cameras) and JPEG photos.

Everything else about this TV is focused on its primary functions as being, a) a TV, and b) a display device. So it comes with lots of inputs including four HDMI sockets and even two S-Video plugs, a connection standard being abandoned by some of the competition.

The panel is another of Panasonic’s ‘NeoPDP’ models, which is improved in specification from last year’s model. Panasonic claims a 40,000:1 native contrast ratio for the panel, bumped up to two million:1 by dynamic processing.

This processing revolves around the panel’s ‘600Hz Sub-field drive‘. The ‘600 Hz’ is the number of times per second that the pixels are switched on and off, allowing black and colour levels to be controlled more precisely by varying the length of time that they are displayed, in addition to their intensity.

The TV is supplied with a desktop stand that you will have to assemble. This was an easy process, apart from the actual lifting of the TV’s near 50 kilograms onto it.

A few months ago I reviewed a 50 inch Panasonic model and couldn’t see any effect from having its ‘Intelligent Frame Creation’ option switched on. This TV was quite different. It did its job of creating interpolated frames so as to smooth motion. It also went under a different name – ’24p Smooth Film’ – when I used the TV to display Blu-ray material.

With both DVDs and Blu-ray it smoothed out onscreen movement very thoroughly, but came with side-effects: an unnatural sheen to the image as low-level noise was ironed out by the processing; and a heat haze effect around some of the moving objects on screen.

After checking it out, I switched it off and left it off. While having it off meant that on some movie scenes with substandard cinematography there was motion judder, no visibility was lost. LCD TVs by contrast rely on such systems to ensure that good detail is visible during motion.

The colour and brightness performance was excellent. With the ‘Normal’ picture setting, the default settings were very close to an ideal neutral. I brought down the ‘Brightness’ control by just one notch to give slightly deeper blacks and that made the picture very nearly perfect.

The digital TV tuner worked just as it should, and gave particularly nice results with HDTV stations. SDTV also performed quite well, however the softer TV programs were mercilessly revealed as such by this TV.

The one substandard aspect of performance was this TV’s deinterlacing of PAL DVDs. It produced various irritating artefacts, so it would be best used with a good progressive scan DVD player.

That point aside, the Panasonic Viera TH-P58V10A Plasma TV is the best way – for quality and value – to watch high quality home entertainment on a screen this size.