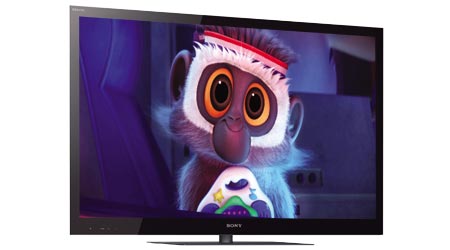 The two most startling things about the Panasonic Viera TH-P65VT20A 3D plasma TV are the size and the price: how big the first is, and how little the second.

Six thousand may not seem little, but at 165cm, this is the biggest readily available TV. Three years ago its predecessor cost three times as much, and being plasma it is considerably cheaper on a cost/square centimetre of screen basis than LCD.

As it happens, it also had some of the best 3D performance we’ve seen in a 3D TV. Part of this was due to the sheer size of the screen: you can’t help but feel very involved with a screen this big unless you are at least four or five metres away. I used it at 2.5 metres. Brilliant!

The other part was the total absence of crosstalk most of the time. In particular, there was no visible dark-ghosting-on-light-background that is so evident on 3D LCD TVs. In this regard it was even better than the Samsung plasma.

In the reverse situation – light objects on a black background – some ghosting was evident, but once again it was a touch better than the Samsung.

The default picture setting – ‘Normal’ – seemed a little too dull, though, in 3D mode. Flicking it over to ‘Dynamic’  brought up the brightness nicely.

You get one set of 3D glasses with the TV, and the infrared transmitter is built-in. The transmitter’s operation interfered with the remote control function of a couple of other pieces of equipment in my system, so it’d be wise to have other equipment near the TV, not on a side wall like mine. There is no 2D to 3D simulator.

The 2D picture performance was excellent as well, and the TV did a good job with a wide range of other functions, including network operation and the convenient ability to plug in a USB hard disk drive for recording.