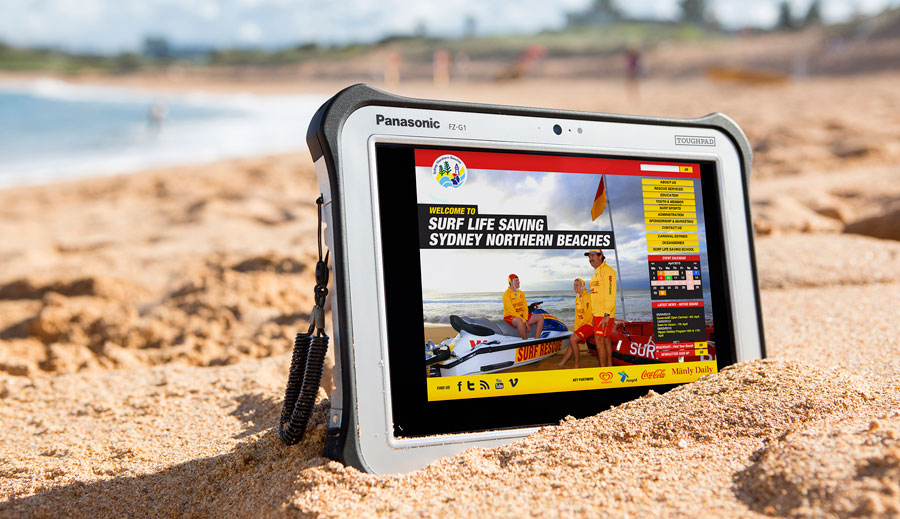 According to a recent survey, over five million Australians are using tablet computers, and while the popularity doesn’t take us by surprise, the fact that 73 percent of failure in these devices comes from being dropped might. With that in mind, Panasonic has launched new machines that can survive most things you throw at them.

True Toughbook story: when this journalist was coming back from a business trip recently, he had a beer spilled on him.

Twenty minutes into the first leg of a trip, the guy next to me accidentally bumped his shoulder into his freshly poured beer, which then spilled onto me, my chair, my pants, and my iPod and headphones.

It was an accident, and thankfully I had an extra pair of pants in my carry-on luggage, but it was when I saw that he pulled out a Panasonic Toughbook to work on only ten minutes later, I thought “figured,” given what had just happened.

Toughbooks aren’t just for clumsy people, however, with many business cases ideal for the insane military spec ruggedisation that Panasonic puts into these things.

The latest of the Panasonic Tough-branded computers arrives in two forms running on Windows 8, with the new Ultrabook style Toughbook CF-AX2 fetching a price of $2499 and featuring an ultra-low voltage Intel Core i5 processor clocked at 1.8GHz, 4GB RAM, 128GB solid-state drive, a couple of USB 3.0 ports, Ethernet, SDXC slot, VGA, HDMI, a thickness of 18mm, a weight of 1.15 kilograms, and an 11.6 inch HD screen that also supports ten points of touch.

And yes, it’s an Ultrabook Touch.

While you can’t rotate the screen in the way the last Toughbook could, you can push the screen so far back on its hinge that it folds against the back of the keyboard, making it very easy to jump between being a laptop and a tablet.

That’s the latest model of Toughbook, but then there’s a new model for Panasonic, with the Toughpad sporting similar innards inside an even more rugged shell.

The Panasonic Toughpad FZ-G1 packs in an 1.9GHz Intel Core i5 into a 10.1 inch 1920×1200 screen display which is not only designed to take a beating, but is apparently brighter than other consumer grade tablets and works in most lighting conditions, sunlight included.

Taking a beating, a thrashing, is what many will be interested in the Toughpad for, and we’ve been told it’s rated for surviving a drop of 1.2 metres, and features IP65 certification for resistance to dust, water, and extreme temperatures.

Playing with the Toughpad today, we can tell you it’s a fairly well balanced device, with a sturdiness you just don’t find in many other machines. There’s rubber along the edges, what feels like an aluminium or a very lightweight metal on the back, and a real sense of strength.

“Panasonic rugged computers are an industry benchmark when it comes to toughness and dependability, and we expect both devices to be extremely popular among businesses with mobile workers requiring a Windows operating system,” said Jason Lee, Product Marketing Manager for the Toughbook brand at Panasonic Australia.

“With the introduction of Windows 8 tablets, the productivity of mobile workforces can now be taken to the next level.”

One such workplace doing that takes place in the sand and the surf, with the Surf Life Savers on Sydney’s Northern Beaches having several of the Toughpads donated to them, making it easier to report on surf conditions, interview people on the beach, and quickly get incident reports written, legible, and sent to the right people.

“Our volunteers have to complete a lot of paperwork, whether it is filling out incident reports on the beaches, keeping track of progress while training, or logging registrations and results on carnival days,” said Rob Berry, Director of Sponsorship and Marketing at Surf Life Saving Sydney Northern Beaches.

“Currently most of this is done on notepads and using paper forms. You can imagine that this is not easy in rainy or windy conditions on a sandy beach. It’s a big thing for us to have something you know won’t be damaged by dropping it and won’t be affected by sand.”

Panasonic’s new Toughbook and Toughpad will be available from authorised retailers later this month.