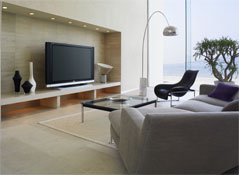 Basic high definition set-top boxes are cheap. And soon both Blu-ray and HD DVD machines will be inexpensive enough for many to buy as well. But displays for high definition have been not cheap at all.

When we talk about true high definition, we are talking about a display that has 1920 physical pixels across by 1080 vertically (expressed as 1920 x 1080). Even for large plasma displays, the resolution has been 1366 x 768. HDTV can certainly look better on such displays than regular TV, and even DVDs, and Blu-ray and HD DVD can look even better. But when you get a chance to see these formats on a true high definition display, you suddenly see what HD is all about.

But you should be aware that not all ‘high definition’ is truly high definition. Enthusiasts grant the title to two formats: those with 1080 vertical pixels  (and known either as 1080i or 1080p), or 720 pixels (720p). Unfortunately, the Australian government muddied the waters by permitting another resolution, 576p, to also be called high definition. That is the broadcast standard used on the so-called HD channels of SBS and Channel 7 (and its regional affiliates). In some circumstances it can offer slightly improved performance over the 576i resolution used for standard definition TV, but not much.

In those resolution names (576i, for example) the ‘i’ stands for ‘interlaced’ and the ‘p’ for progressive scan.

So what are your display options? All major display technologies – plasma, LCD, front projectors, rear projection TVs – are now available in true high definition resolutions. A new generation of such front projectors are now being released for around $8,000, while LCD and rear projection TVs offering this resolution are in the $5,000 to $8,000 range. True HD plasmas are very expensive, starting at just under $15,000.

If these prices don’t appeal, you can use the older high resolution (as opposed to high definition) display devices to still realise improved picture performance with HD over SDTV and DVDs. For around $3,000 front projectors can deliver 1,280 by 720 pixels with very high performance, and plasmas and LCD TVs of 1,366 or 1,024 by 768 pixels are also very affordable.

But there is one matter of which you should be aware in purchasing your high definition display. The new Blu-ray and HD DVD formats conform to American standards and work best with displays that support a 1080 resolution picture in progressive scan format, delivered at 60 frames per second (1080p60). A lot of display devices only support interlaced video at this resolution (1080i60 or 1080i50).

The next generation of Blu-ray players will also deliver 1080p24 (ie. 24 frames per second) video which, for technical reasons, actually provides a better picture than 1080p60.

So if you have an eye to the future with your HD display purchase, make sure it at least supports 1080p60 signals, and preferably 1080p24 as well.

Follow the links below for reviews of four recently released high definition panels and projectors: