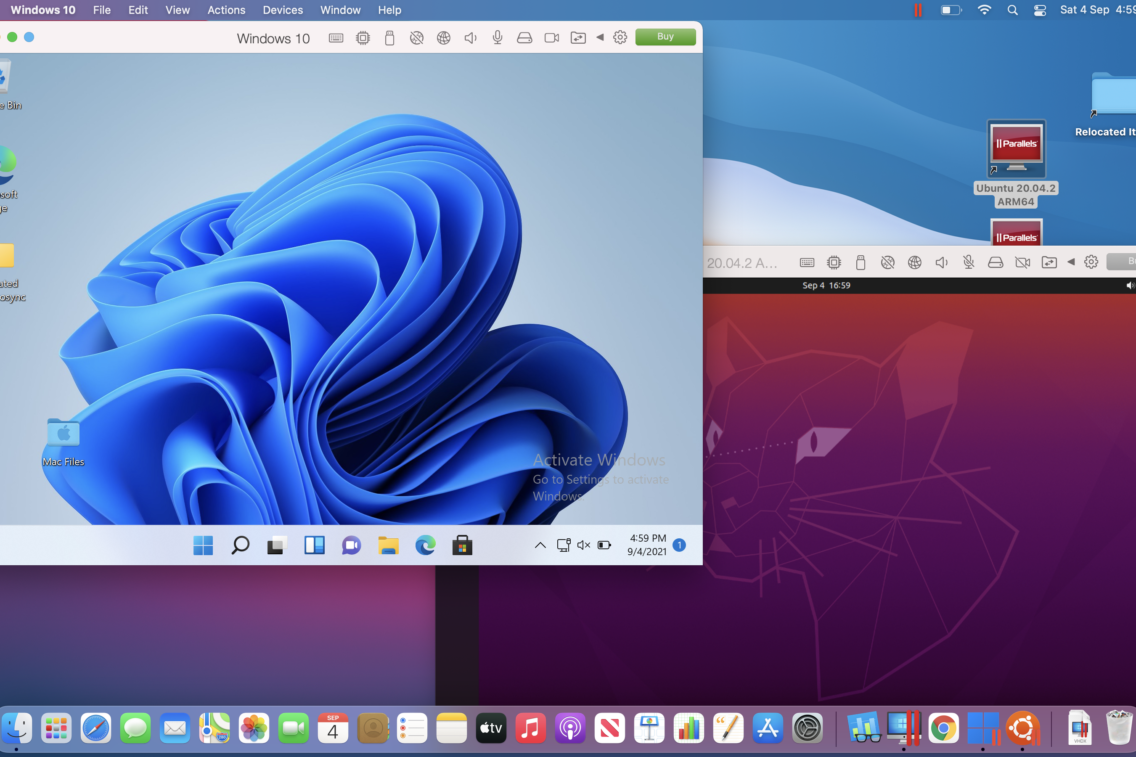 Parallels Desktop for Mac 17 – the best of both worlds (review)

Designed to make the most of Apple’s powerful new M1 processor, Parallels Desktop for Mac 17 ensures that Mac users always have Windows at hand without getting their hands dirty.

However dedicated to Apple you are, there are still times when it’s handy to have access to Windows or Linux. That’s where Parallels comes in, makes it easy to run multiple operating systems on your Mac at the same time.

Parallels’ virtualisation software mimics hardware. This lets you trick Windows, Linux or even another copy of macOS into thinking it’s running on a standalone computer. In fact, it’s actually running as an application on your Mac. Keep in mind that Parallels is just a hardware emulator. You still need to supply your own copy of the other operating systems.

Parallels Desktop for Mac 17 supports the upcoming macOS Monterey, both letting you run Parallels on Monterey and run Monterey on Parallels. It’s also ready to make the most of a M1 power plant under the bonnet of a new Mac.

Apple’s move away from Intel chips in favour of Apple Silicon M1 chips, such as in the latest Apple MacBook Air (M1 2020), means that new Macs will no longer support Boot Camp. The benefit of Boot Camp is the ability to boot an Intel Mac into Windows. This runs Windows on the actual hardware rather than on an emulator. With the demise of Boot Camp for M1-powered machines, which use ARM architecture, Mac users who need access to Windows will rely on Parallels more than ever.

Parallels Desktop for Mac 17 runs on both M1 and Intel Macs. It’s a universal binary download, so the single installer works on both types of Mac. Even so, they offer slightly different features.

The most noticeable difference is that, when running on an M1 processor, Parallels Desktop for Mac 17 only supports operating systems designed for ARM processors. This limits you to the ARM versions of Windows 10 and Windows 11. Along with a few flavours of Linux: Ubuntu, Fedora, Debian and Kail.

The folks at Parallels say it could be possible to re-engineer things in the future, so Parallels could run older Intel versions of Windows on M1 Macs. They haven’t made a final decision, but say it doesn’t seem likely, considering that support for Windows 10 and 11 will meet the needs of the vast majority of Parallels users.

To check out the performance on Apple Silicon, we took Parallels Desktop for Mac 17 for a spin on the Apple MacBook Air (M1 2020). Installation is very straightforward. It explains the issues around the ARM-based M1 processor and how to get a compatible copy of Windows.

While you need to download Windows separately from Microsoft, there’s also the built-in option to automatically download and install the latest ARM versions of Linux.

You can run these Windows/Linux operating systems in a window on your Mac. You can make them full screen – perhaps on a separate desktop to help keep things straight in your head. This makes life easier if you’re regularly switching between operating systems. There’s also a picture in picture mode, which keeps the virtual machine in a floating window on your Mac desktop.

That said, one of Parallels’ most useful features is Coherence mode, which is a bit of a mind-bender. It completely blurs the lines between macOS and Windows, by hiding the Windows desktop and just showing you the Windows applications.

The latest version of Coherence makes a few integration improvements, such as the ability to drag and drop text and graphics between Windows and macOS applications. This includes support for Monterey’s new Quick Note feature. Unfortunately for Linux users, Parallels discontinued Linux support for Coherence a few versions ago.

Apart from this, there are no real showstopper new features. They’re mostly incremental improvements, such as adding support for USB 3.1. Really, it’s the performance boost that catches your attention.

To ensure the best performance, Parallels Desktop for Mac 17 sizes up your Mac’s hardware. It automatically allocates the optimal resources for your virtual machines. If you’re not happy with that, the new resources manager gives you a lot of granular control. This includes how many CPU cores and how much RAM is allocated to each virtual machine, along with which resources they can access on your Mac.

As with earlier versions of Parallels, Parallels Desktop for Mac 17 can take advantage of Travel mode to automatically pause Windows or Linux when it’s not in use. This further saves on both systems resources and battery life.

Put to the test, boot times for the ARM version of Windows 11 are lightning-fast. After clicking Parallel’s Windows desktop icon in macOS, it’s only 15 seconds until you’re staring at the Windows 11 desktop.

Of course, in Coherence mode, you don’t see Windows boot in the background. Click on a Windows application icon in the macOS dock, like Microsoft Word, and it launches directly as if it was a macOS application.

To save time, you can set Parallels to automatically run Windows in the background when you start your Mac. This way, Windows applications spring to life instantly.

Of course, virtualisation tends to be resource hungry, so you might not like the idea of constantly running Windows behind the scenes. Thankfully, its impact on macOS performance is minimal on a new M1 Mac.

Without Windows running in Parallels, our test Mac uses 2% CPU and 4 GB of its 8 GB of RAM when sitting idle. Launching Windows in Parallels sees this jump to only 12% CPU and 6 GB RAM. This is depending of course on how much RAM Parallels has allocated to Windows.

Because Parallels is so good at sharing system resources, this has less than a 2% impact on macOS performance according to our Geekbench benchmarks. Even better, when you’re not using Windows, Travel mode hands most of those resources back to macOS, so it has even less of an impact. Unless you absolutely push macOS and virtual machines to the limit, you’ll likely never even feel the impact of virtualisation’s magic.

For Mac users who need to keep other operating systems close at hand, Parallels Desktop for Mac 17 is a no brainer. Especially when you compare it to the expense of buying a separate physical machine just for running Windows and/or Linux.

The performance on an M1 Mac is outstanding. Virtualisation’s toll on macOS is all but invisible. There’s no need to hesitate when wondering if it’s worth the effort of launching a virtual machine. Thanks to Coherence mode, when you need a Windows application you can quickly get on with the job without wrestling with Windows itself.

Tight integration between macOS and Windows is the icing on the cake, ensuring you maintain a very Mac-esque user experience from Windows applications when you’re forced to straddle both worlds.

Yes, if I was a Mac user who needed regular access to other operating systems.

The best reasons to upgrade to macOS Monterey

WFH should not be WTF – (work from home)