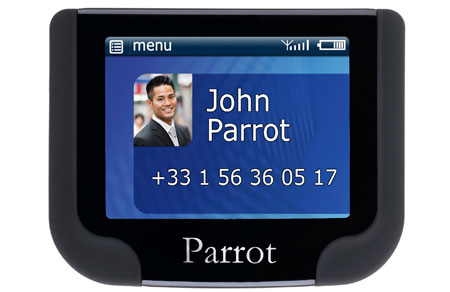 The Parrot MKi9200 Bluetooth hands-free car kit is a pretty comprehensive, and mostly successful, after-market solution to fit out cars that aren’t lucky enough to have such a system in-built. It does all the phone things you’d like to have in-car, with the added bonus of some terrific connectivity options for playing music. If your car lacks the comes-with-Bluetooth feature, and you’re not a fan, for either fashion or comfort reasons, of attaching things to your ears, but you still want to be a careful and law-abiding motoring mobile phone user, then the Parrot MKi9200 is an option to consider.

The components of the Parrot MKi9200 are: a small TFT screen (72 x 57 x 12 mm), RF remote control button, various leads and sockets (more on this later), microphone and the magic blue control box that makes it all happen. The box is hidden under the dash – out of sight, out of mind, and just makes the whole system work. The remote control can be steering wheel- or dash-mounted, and has answer and end call buttons, both nice and big and clearly marked with green and red graphics. Also on the remote are the music control buttons, start/stop, and cue/back, scan/forward and start/stop.

The screen is small, but given that you should only be using the screen when your vehicle is stationary, the size and resolution are just fine. Also helping you keep you concentration on the road and not the in-car gadget, the top level menu choices are announced text-to-voice, as can be the names of incoming callers. Caller names and numbers are of course displayed on the screen, but if you’re in motion you probably shouldn’t be looking there.

Tucked away, in the glovebox being the obvious place, are a trio of very handy little connections to play your music through the car speakers. There’s a USB plug, 3.5 mm jack and a connection for an iPod – so whether you have one of Apple’s super popular iPods, a phone or portable AV player with a 3.5 mm input, or a USB flash drive, you can carry a lot of music wherever you drive.

The remote control is a good size, with easy to locate, even without looking down, buttons to answer or end a call. You’re able to affix the remote control to somewhere other than the steering wheel, but to do so would take a quite a bit of ease out of the equation. The method of securing the remote is via something like a rubber watch band, and if on the steering wheel it fits snugly. It is a chunky beast, somewhat offset by angling it in slightly, but it still will protrude out a little from the plane of the steering wheel, particularly the volume knob. It should not – it really should not – affect your driving, but your driving will affect the buttons. Every so often your hand will probably hit a button and stop your music, and sometimes the impact will cause the music control buttons to ‘stick’. This is an easy fix, just a matter of slipping a fingernail under the button to pop it back to its rightful position.

The sound on the MKi9200 is clear, both the incoming caller’s voice through your car’s speaker system, and outgoing for the person on the other end of the line. The microphone does a good job of picking up your voice, and some in-control-box electronic wizardry does well filtering out in-car noise.

The screen is big enough, and clear enough, the only problem with it is the form of attachment – double-sided tape. My screen has had three goes at being affixed now, in each case by an installer, and in every instance the bond didn’t last past 2 days. A better option would be some sort of flexible tie, as all cars surely have a spot where they could use such a feature to creatively and firmly anchor the screen.

If you’re worried about the screen being on show, pointing potential bad guys to your nice little in-car system, you can simply unplug and unclip it, and hide it away.

The Parrot system will automatically sychronise the contacts on your phone when you first pair the phone to the system, and the update the list each time a new entry is detected. The system can accommodate up to 8,000 contacts in total, with a limit of 1,500 per paired phone.

A note on firmware. From time to time Parrot updates the system, fixing bugs or improving performance. It’s just a matter of going to website of the local distributor, Strike (link will open in a new window), and locating the page for the device under ‘Support’. In the time I’ve had the MKi9200 there have been 2 firmware upgrades – the most notable fix was getting the random play music option to work. At the time of writing there is no mailing list to alert you of an upgrade, so you’re going to need to keep a note of the version number of the firmware of the unit, and from time to time check the Strike website for new versions.

Set-up the remote right, and the Parrot MKi9200 Bluetooth car system works extremely well, making it both easy and safe to talk on your phone while driving. Set it up awkwardly, and using the screen while moving takes a lot of the safety out of the equation. But this is not the fault of the system, the onus on safe use rests entirely with you. The music connectivity is the icing on the cake, being able to play music and podcasts from an MP3 player or flash drive, and not having to deal with an FM transmitter – just brilliant.

The unit itself has an RRP of $479, but unless you’re extremely handy in the auto electric stakes you’re going to need the Parrot MKi9200 installed. It’s about a 30 minute job, and will cost you approximately $200. Be sure to mention to the installer to take care remving your car’s head-unit, which they need to do in order to wire up the control box. Some in-dash head-units are very firmly fitted and can require a bit of brute force to remove, so care needs be taken so that the dash is left unmarked.