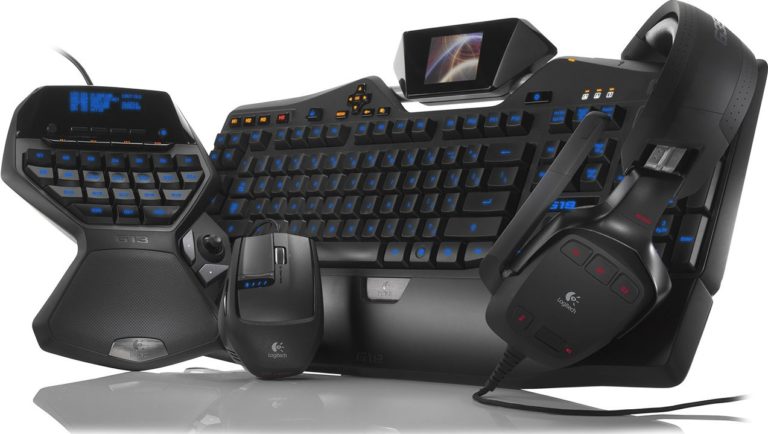 There was a lot of great stuff for PC geeks – PC stuff for 2019. From new AX routers to blazingly fast PCIe NVMe SSDs it occupied a large slice of our coverage.

The main thing I noticed about PC stuff 2019 was the rise of Ryzen, but not necessarily the fall of Intel. The Sith Lord struck back with a vengeance with its 10th generation i9 and Project Athena only to be annoyed by Qualcomm and its SD8cx Windows on ARM chips.

Here is some of the stuff that impressed us in PC Stuff 2019.

First an apology – we drew you in with Logitech G gaming rig but so little of this article is about gaming. PC Stuff 2019 is about consumer and small business things that we found invaluable.

Notebooks – too many to choose but we did

But we need to make a few honourable mentions

Samsung Galaxy Book 2 ($1599 complete) Windows on ARM and Microsoft Surface Pro X ($1849 plus keyboard and accessories) Windows on ARM. While we cannot give an unreserved buy recommendation, they are perfect for the traveller that wants long battery life, LTE and only uses Office 365 and the usual Windows productivity software – they won’t run 64-bit apps.

The latest Microsoft Surface Pro 7 continues the Surface design of a full-fat Windows tablet with detachable keyboard from $1399 to $3749 plus keyboard ($199-249) and accessories. But it adds USB-C – at long bloody last! If you need a desktop replacement with a 10th Generation Intel Core, this is it!

We don’t want to take away from the fantastic products from ASUS, Acer or Dell.

Its 4K, Thunderbolt 3/USB-C or nothing but you need the graphics card to drive them – especially dual monitor setups.

Channel 7 Sunrise GadgetGuy and gamer Val Quinn concurs saying, “It is huge, huge I tell you! It is like sitting in front of the Pentagon ‘Command and Control Centre’ where you can see everything.” We covered other Samsung gaming, and business monitors with QLED (Quantum Dot) technology and its colours blow us away. See Samsung’s range here.

Philips countered the Sammy 49” with a 43” Momentum, 4K, HDR1000, 16:9 monitor. It was awesome to see, but the 16:9 format meant eye and neck strain trying to take in such a vast vista. In reality, it was another specialist gaming monitor that our Gaming Gadgeteer Arjun Lal would have killed for as he tried a Philips 55” 4K TV as a gaming monitor. Philips 4K monitors offered some of the best value in 2019 and deserves to be on your shopping list.

I will let you into a little secret – The 35” 4K BenQ EX3501R UWQHD USB-C was my personal favourite of 2019. You could not have asked for more (except perhaps two of them as I need dual monitors) and its AMVA, WLED, 21:9, curved UWQHD screen was to die for. BenQ is another brand you need to consider.

Acer Predator – it is about speed

Thomas Bartlett drooled over the Acer Predator gaming monitor XB273K, a 4K, native 120Hz panel (overclockable to 144Hz) with NVIDIA G-Sync. Acer’s monitor website is here, and it also can be found at a lower price online. But a caution – Read Arjun’s Nvidia – higher framerates means a better Kill Death ratio before you junk your existing 60Hz monitors.

If you are lucky enough to have a Thunderbolt 3 PC or Mac, you can drive two 4K@60Hz monitors from the right dock.

ATEN has joined the fray with its UH7230 Thunderbolt 3 dock, and it’s a slightly later take on the others offering USB-C and USB-A 3.1, Gen 1 connectivity as well.

But the crown here has to go to Kensington because of its sheer range of docks for USB-C (Alt Mode), USB-A, Thunderbolt, Surface Pro, MacBook, desktop, travel, 1080/2K/4K and more that all work so well.

But my personal favourite this year is traveller’s friend – the ALOGIC USB-C Dock Wave that has USB-C, 4K HDMI, Qi charge and a 5000mAh power bank all-in-one.

But a close, very close second was the WD Black SN750 – but these cost a few dollars more so Samsung takes the crown.

But I liked the ‘drink coaster’ style of the USB-C 3.1 Gen 2 LaCie Portable 2TB SSD.

Honourable mention must go to Samsung’s X5 external Thunderbolt 3 that blew USB-C/SATA 6 speeds out of the water. However at $939 for 1TB and $1799 for 2TB you may have to be deliriously happy elsewhere.

Hard disk – do they still make them?

Honourable mention for Seagate’s Iron Wolf Pro NAS drives that holds GadgetGuy’s most treasured data possessions. There is still a place for spinning disks in NAS and data centres, and you can get 10/12/14/16TB for $599/678/7654/949 making it very low-cost storage.

There is only one brand as far as GadgetGuy (a small business) is concerned, and that is Synology.

Our pick this year was its DS919+ for its seriously fast speeds enabled by two PCIe NVMe M.2 2280 SSD cache slots. We achieved a record 116MBps over gigabit LAN and double that over 2x Gigabit aggregation – seriously fast NAS storage.

But more than that the SSD speed ups internal read/writes making it possible to render/serve 4K video on the NAS. This is a ridiculously low cost $698 device that takes four hard disks – add Seagate’s Iron Wolf Pro and two Samsung EVO 970 and you have a fantastic, reliable internal NAS.

I note that NETGEAR also has a Nighthawk 8-stream Wi-Fi 6 AX6000 extender that I can’t wait to try.

We updated our Mesh guide upgrading our reluctant acceptance from ‘hate it’ to ‘OK in some circumstances’. We think of Mesh as we think of 5G – a great hoax perpetrated to sell more routers.

But one deserves mention – the Synology MR2200AC Mesh tri-band. The critical issue here is that we use three at GadgetGuy – one on each floor – linked by Ethernet cable to provide a proper AC2200 signal on each floor. If we had to rely on the vagaries of Mesh Tri-band using a dedicated 5Ghz backchannel, then this would not be here.

Google also has a new Nest Mesh AC2200/AC1200 MU-MIMO that can connect via Ethernet. No review yet, but we expect it will be vastly better than V1.0!

Also new is D-Link’s Cover-2200 Tri-band AC2200 mesh system with onboard McAfee Secure Home protection. It also can use Ethernet or 5Ghz backhaul, and we will be reviewing it soon.

Speaking of McAfee, we gave top marks to D-Link’s D-Fend Dir 2600 McAfee router. While it can be used as a standalone Wi-Fi router for a small home/apartment to stop network and malware attacks the real value of this gem is to add it to an existing network and protect everything!

The find of the year is Shutup10 – the free privacy tool Windows should have had.

LastPass free password manager is all you need to manage passwords on Windows, macOS, Android and in various browsers.

And my old favourites Wise Disk Cleaner and Wise Registry Cleaner free from Wise. Run these two weekly, and you will never suffer from disk bloat, cookie tracking and so much more. They are totally safe and if you like them why not fling a donation to it.

If you were to buy any of our picks, we guarantee that you will get the best value for money and performance.

It is so nice to play with pretty, shiny things.