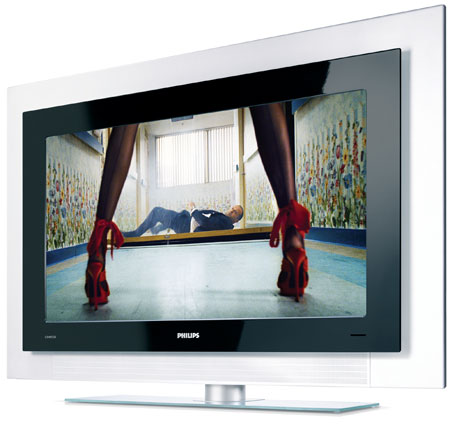 In theory there are two advantages to having this. One is that the digital TV signal can skip the whole business of connections, retaining higher quality. And the other is that an integrated TV, with one remote control, can offer greater convenience.

But Philips also has out a high-definition digital set-top box (STB) at a very competitive price. It features a HDMI output, and the Cineos TVs have HDMI inputs (two, in fact), so the signal is retained in perfect digital throughout, with no degradation. And the set-top box’s remote control is highly integrated with the Philips TV, so that possible disadvantage is also largely eliminated.

The advantages of having a separate set-top box are several as well. We have never seen an integrated TV that delivers quite the full functionality of a standalone STB. And the Philips DTR7200 has the advantage of providing standard definition video via S-Video and composite video at the same time as it?s delivering high-definition to your display, which is useful for recording.

So, we thought, why not review the TV and the digital TV receiver together, just as though they were an integrated unit. We coupled Philips’ new 42 inch LCD TV, the Cineos Flat TV 42PF9831, with its newest revision of its high-definition digital TV tuner, the DTR7200.

Rather than use the normal home theatre setup, we combined these two units together via a HDMI cable and then treated them as a standalone TV.

The TV has a 107 cm LCD panel with a resolution of 1366 by 768 pixels. Its prime selling point is the four-direction Ambilight system. Philips’ Ambilight provides backlighting for the screen, delivering (often coloured) light to the area behind the panel. This is intended to provide a better viewer experience by generating a subjective feeling that the picture is larger than it actually is.

With the 42PF9831, there are four Ambilights, one on each side (including top and bottom) of the display. These can be set to complement the onscreen colours closest to them (at several different levels of intensity), or simply left to provide a stable white glow behind the screen. With this model, a large white face is provided behind the screen proper upon which the Ambilight can work its magic.

The TV also has the latest in Philips’ picture processing technology, Pixel Plus 3 HD, and a new innovation: ClearLCD. This uses an on/off scanning backlight to sharpen the LCD pixel responsiveness so as to reduce the picture smear that can sometimes occur in fast-moving scenes on LCD panels. In fact, this worked extremely well, producing the cleanest moving image displays we have seen with any LCD TV, and matching the best plasma displays.

Both the TV and the STB have clearly had a lot of work put into their menu and text displays. Although quite different to each other, both were very attractively designed, especially that of the TV. This had sculpted three dimensional selection bars. Perhaps the only criticism of it was that with the picture adjustment settings, the control bars consumed a little too much of the display area, sometimes making it difficult to see enough of the picture to optimise the adjustments.

With the DTR7200, the subtitles were not the usual afterthought, tacked on with blocky characters. Its subtitles were delivered in sharp, yet smoothly rounded characters of great legibility.

Both the TV and the high-definition set-top box were of remarkable value, with the TV coming in at not too much more than the cost of a fine-quality, high-resolution, 42 inch plasma. The DTR7200 is among the lowest cost, HDMI-equipped high-definition boxes on the market. Yet in almost all respects it works perfectly.

The reason for ‘almost’ is that it does, surprisingly, lack one feature: there is no teletext support. Fortunately the TV handles this nicely with its analog tuners, and with 1200 pages of teletext memory, operates much more effectively than most TVs with quick access to all broadcast pages.

One other unusual aspect of the set-top box is that the component video outputs can only provide high-definition signals (you can cycle through 576p, 720p and 1080i), not standard definition. For that you have to use the S-Video or composite video output. I would also have liked the unit to have the ability to output the video at whatever its native resolution was, rather than forcing it to a preselected value.

Aside from those issues, the digital TV unit was excellent, and easily as good as any of the competition in terms of picture and sound quality.

As to the TV, it was clearly a step above all the others in its class that we have seen. In addition to the ClearLCD function, the colour and scaling performance were top notch, and the black levels were top of the class. In this regard it still couldn’t produce black levels as good as the best plasma displays, but it wasn’t far off.

On the other hand, the picture was smoother than any plasma display, and the picture processing features provided on the TV offer abilities to make significant improvements in quality. The Digital Natural Motion feature, for example, smooths the motion of video and is especially effective where film judder is apparent. Philips has added considerable processing grunt to the system so that now it works not only with standard definition TV, but also with 576p sources (but not 1080i or 720p).

The sound quality was also among the best I’ve heard from a TV, with excellent clarity and a fairly decent pseudo surround effect. A five-band graphic equaliser allows you to tailor the sound to your preference.

In combination, the Philips Cineos Flat TV 42PF9831 and DTR7200 HD set-top box provide everything that you can get from an integrated digital TV, and more.