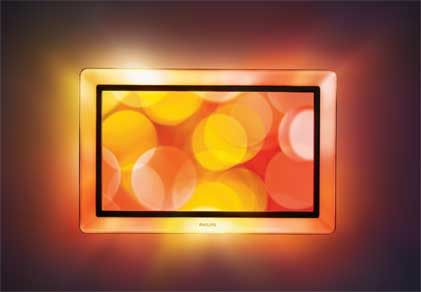 You may have heard of the Ambilight feature on many recent Philips LCD TVs. This is a set of lights behind the edges of the TV designed to provide lighting beyond the edges of the picture in order to extend the sense of the onscreen action. Since then further lights have been added, with finer control and additional colours, but this must surely have reached its ultimate development in the Philips Aurea 42PFL9900D.

This TV has just a couple of the Ambilight backlights, but the whole screen is framed by a 65 mm wide white bezel, behind which are lodged colour 126 LED lights to provide a kind of direct view Ambilight experience.

So in addition to producing a gentle colour on the wall behind the TV, this TV surrounds the whole picture with a 65 mm wide field of colour. The idea is the ease eyestrain by broadening the effectively lit area, and to increase viewer involvement in the picture by using colours outside the screen itself that extend the sense of the screen size. You can choose to have the Ambilight running brightly or gently, and have some control over the way it delivers different colours.

There is much more to this TV than that. The 42 inch (107 cm) widescreen LCD packs more than two million pixels, to provide a screen resolution of 1920 x 1080. This is a fine panel in itself, but it is backed by an awesome set of video processing technologies that shoot it to the top of the class.

Also provided are three HDMI inputs in addition to the usual collection of analog audio and video inputs, plus a couple of European SCART ones. There is also a USB socket for playing MP3 music or displaying JPEG photos. With the high resolution of the screen and the excellent video scaling, the latter look simply immaculate.

The TV includes both analog and high definition digital TV tuners. Both are well integrated into the TV’s operation. The only complaint about the latter is that the EPG key doesn?t seem to be compatible with Australian schedule broadcasts, because it shows only Now and Next, rather than the seven-day guide delivered on some stations, with which it apparently works in some European countries.

Since the TV’s firmware can be updated via the USB socket, perhaps we’ll see that corrected in the near future.

The picture processing technologies include Philips’ PixelPlus HD, and HD Natural Motion. Both of these work with all signal types, including Blu-ray and HD DVD signals delivered in progressive scan format at both 60 frames per second, and the even higher quality 24 frames per second.

I took the opportunity to watch the Steve McQueen, ahem, vehicle ‘Bullit’ on Blu-ray and it was incredible seeing the smoothness imparted to the motion by HD Natural Motion. Frames that juddered without it just slide across the screen, as though on Teflon, with this circuit switched on. There were some halo-type artefacts with standard definition material, but none with high definition. The PixelPlus HD added extraordinary sharpness to the movie. I watched happily with this on, noticing McQueen’s stubble in a scene where it had never before been visible.

But finally I had to switch it off, because in the night scenes it emphasised film grain so much they began to take on the appearance of a pointillist artwork in a close-up of McQueen’s face.

You can have the Ambilight provide a kind of mood lighting even when the TV is switched off. Beware, this uses between 60 and 110 watts, depending on the mode.

Nevertheless, the whole suite of video processing for the most part make the images presented by the Philips Aurea 42PFL9900D better than any other LCD TV presently on the market.

If you missed the Gadget Guy showing this to Kochie and Mel on Channel 7’s Sunrise, click the graphic below to watch the video.