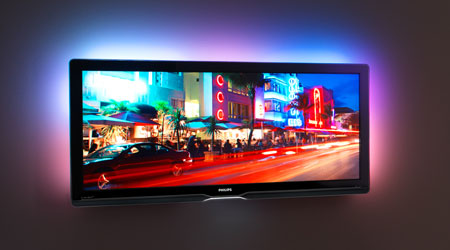 It’s not often that one can say this, but the Philips Cinema 21:9 LCD panel is unique, and you can tell that it’s unique at a glance. That’s because instead of having the usual widescreen 16:9 display, it has a super widescreen 21:9 picture.

Why? This size of screen is to optimise the picture when you’re watching a really widescreen movie. These typically have aspect ratios of 2.35:1 or 2.40:1, and there are really a lot of them. Just about every commercial cinema release film, in fact. On a regular widescreen display they appear with a black bar at the top of the picture, plus one at the bottom.
With this display, the picture can expand to fill the whole screen, eliminating the black bars, and giving a much bigger picture.
And since the screen itself is quite large, with a 142cm diagonal (56 inches), that really is a very big picture. In order to provide full 1080p performance, the LCD panel actually has more than the normal number of pixels horizontally: 2560 compared to the usual 1920.
Note that I keep writing ‘display’ rather than ‘TV’. While there are TV tuners in the unit, these have not been rejigged to work fully in Australia because the distributor’s opinion is that this display is for the connoisseur who would supply suitable HD sources, such as a PS3, Blu-ray player and high definition PVR or Foxtel IQ2. But aside from that it has all the high end features you’d expect from a top of the line television.
It supports multimedia playback from a USB device, and from networked devices. It not only has an Ethernet port but offers built-in WiFi. This network multimedia support is Digital Living Network Alliance (DLNA) certified, so it will work with Windows Media Player, and a host of other software products, as the server.
It also supports European NetTV, a collection of more than 1000 Internet TV stations from around the world, but continued support for this will depend upon whatever regional control controls the NetTV providers place on their feeds.
The display has decent built in two-way speakers and Philips’ Ambilight feature. This provides three bars of light at the rear of the display at the top and sides, and these produce backlighting of the display designed to enhance the onscreen appearance.

The unit has a wealth of aspect ratio options, including an ‘Auto’ one that does most of the work for you. You can have it blow the picture up to fill the screen entirely, even if it means distorting the geometry slightly (eg. making the people on screen a little fat), or have it fill the screen as much as possible while keeping everything in proportion.
I preferred the latter, but it’s your choice. It was initially a little odd watching a regular 1.85:1 widescreen movie with black bars down either side of the picture, but it didn’t take long to get used to it.
The ‘Auto’ aspect ratio setting seems to work by examining the picture for black bars and then resizing the picture to eliminate them. With some movies – higher quality ones with good black levels – this led to a problem. The display would sometimes become confused about where the picture ended and the black bars started, making it unexpectedly zoom in and out significantly when there were large areas of black near an edge of the picture.
A simple press on the dedicated Aspect Ratio key on the remote, followed by a manual selection, promptly fixed this.
No-one does video processing better than Philips, and that was clear with this display. A 2.35:1 widescreen movie on Blu-ray was gobsmackingly gorgeous to look at, but even regular DVDs looked exceptionally good.
Philips motion smoothing process (called ‘Perfect Natural Motion’) is one of the best around, and produced extremely smooth motion even on very sharp Blu-ray discs, with virtually no artefacts, and even without adding much of the artificial sheen to the picture that most such circuits manage.
But do beware: this display is slow. It takes a long time – about one fifth of a second – for the video processing to do all its stuff and get the picture up on the screen. If you have your sources plugged into it and use its own speakers for sound, all will be fine. But if you use an external sound system, you will need one that has lip sync adjustment (one with auto lip sync works fine). Otherwise, the picture will be so far behind sound, it will look like the people on screen are speaking a different language and have had the English dubbed.

The Philips Cinema 21:9 56PFL9954H LCD is a genuinely exciting product. It’s expensive, but I’m not aware of any other product that will do what it does, and I doubt that any would do it as well.
Overall
Features
Value for money
Performance
Ease of Use
Reader Rating0 Votes
Unique picture when it comes to very widescreen movies; Full high definition picture; Superb picture quality
Very complicated; Must have lip sync adjustment in audio equipment due to delayed video processing; No effective TV tuner
4.4