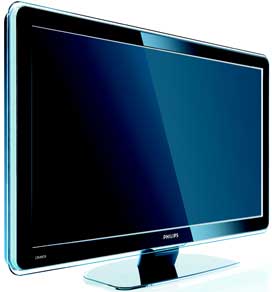 In its branding of a number of features in its new Cineos 42PFL9703 LCD TV, Philips has exhibited conspicuous courage. Those features are ‘Perfect Pixel HD Engine’, ‘Perfect Natural Motion’, ‘Perfect Contrast’ and ‘Perfect Colors’.

So, are the motion, contrast and colours of this TV perfect? Let us see.

But first, let’s see what else the TV does, as it does do an awful lot.

First, the display panel is a full high definition model, with 1920 x 1080 pixels, measuring 107 cm (42 inches, which Philips notes makes it 10 percent bigger than the common 40 inch size). Second, this panel is packed with perhaps the most extensive array of video processing technologies ever incorporated into a TV. That’s where the whole ‘Perfect’ thing comes in, but more on that later on.

Third, the TV is incredibly well-connected. It supports composite video, S-Video, component video, HDMI, computer-style RGB, and consumer-style RGB (via a pair of Euro-SCART sockets). It also has a USB socket on the side (one of the four HDMI inputs is on the side as well for easy accessibility). Generally TVs with such sockets provide them for photo display. This TV also plays video (MPEG1 and MPEG2 video) and MP3 music.

Finally, there’s something I’ve never before seen on a TV: a network connection. Plug it into a router servicing your home computer network and you have access to the same media formats as you would from USB, as provided by media server software on your computer. For Windows computers, Windows Media Player 11 or later does the trick, but there are also servers available for Linux and (Intel-based) Macs.

So how does the TV measure up? On Philips’ own label – ‘perfect’ – it fails. Of course. It’s a pity that Philips used that word, because the TV is so very, very good. It simply falls short of perfection. As you would expect.

For example, it has excellent black levels… for an LCD TV. These are helped by the dynamic contrast processing, which reduces the level of the backlight when the picture is dark, or when the ambient light in the room is dark (you can switch either of these features off if you like, as you can with all the other picture enhancement features).

But it is not entirely black. A good plasma beats it here. It is good for LCD, but imperfect.

The colour? It may well be perfect. It certainly looked absolutely wonderful. Philips says it has 17 bits of colour depth for each of the three colours, allowing 2250 trillion different colours. This certainly trumps every other brand and, I suspect, the capabilities of the human eye. More importantly, the colours were smoothly rendered and the processing of the TV kept them clean and delivered smooth graduations.

The TV also proved capable of excellent scaling of the incoming video to its screen, providing generally an extremely smooth image. The only failing here was with 576i material delivered from a DVD player. The TV’s deinterlacing seemed to be strongly biased towards treating the signal as video sourced, and this generated artefacts on some material. There was no way to control this within the TV’s settings, so you would do best to use a high quality progressive scan DVD player.

One of the aspect ratio settings is called ‘Unscaled’, and this is the one to use for 1080i or 1080p sources since, as its name suggests, it doesn’t scale the image. That means that each pixel from the source is allocated to the matching pixel on the screen without unnecessary processing. This setting isn’t available for 576i or 576p input, but it is with 720p television, such as that from ABC HD. In this case it does scale the picture up, but only to the actual size of the display panel. With 576i and 576p, the picture is scaled up to a little larger than the display area, with the overflow (called ‘overscan’) invisible off the edges of the display.

One quirk with ‘Unscaled’ will cause many users to leave it off, at least for digital TV (it is set separately for TV and the external inputs): if one of your local HD stations use the 1440 x 1080 standard for their HD transmissions rather than 1920 x 1080 (this is common in regional areas), then with ‘Unscaled’ these will appear in a 4:3 aspect ratio with black bars down the sides of the screen.

The handling of motion in video was interesting. Philips was the first company to release a frame interpolation system into consumer televisions. It has managed to retain the edge on the quality of these systems, even to today. These work by taking in two video frames and calculating a new video frame to sit between them, allowing the onscreen motion to move much more smoothly.

This now apparently incorporates a super-computer or two because with this TV it works on full high definition material. It continues to confuse me, though. It adds an artificial sheen to the image that makes it look less natural, and with some images still generates a weird heat-haze effect around some onscreen elements moving in front of others.

But it also allows you to see things in the picture that would otherwise remain unseen. For example, when I played one complex scene from a Blu-ray disc (which, to be fair, displayed poor cinematography), the detail was lost due to a judder as the picture moved across screen – when the natural motion processing was switched off. With it switched on, though, the movement was silky smooth and every fine bit of detail within the image could be inspected.

Is the Natural Motion perfect? No way. But it can’t be. What it’s trying to do is re-create something that was lost. And much – perhaps most – of the time it comes very close to doing just that. Really, what more could you ask for?

A networked TV with super computers? Perhaps that’s what we need today. And perfect? Well, not quite. The Philips Cineos 42PFL9703 TV does, however, succeed in delivering the best picture quality from an LCD TV that I’ve yet experienced.