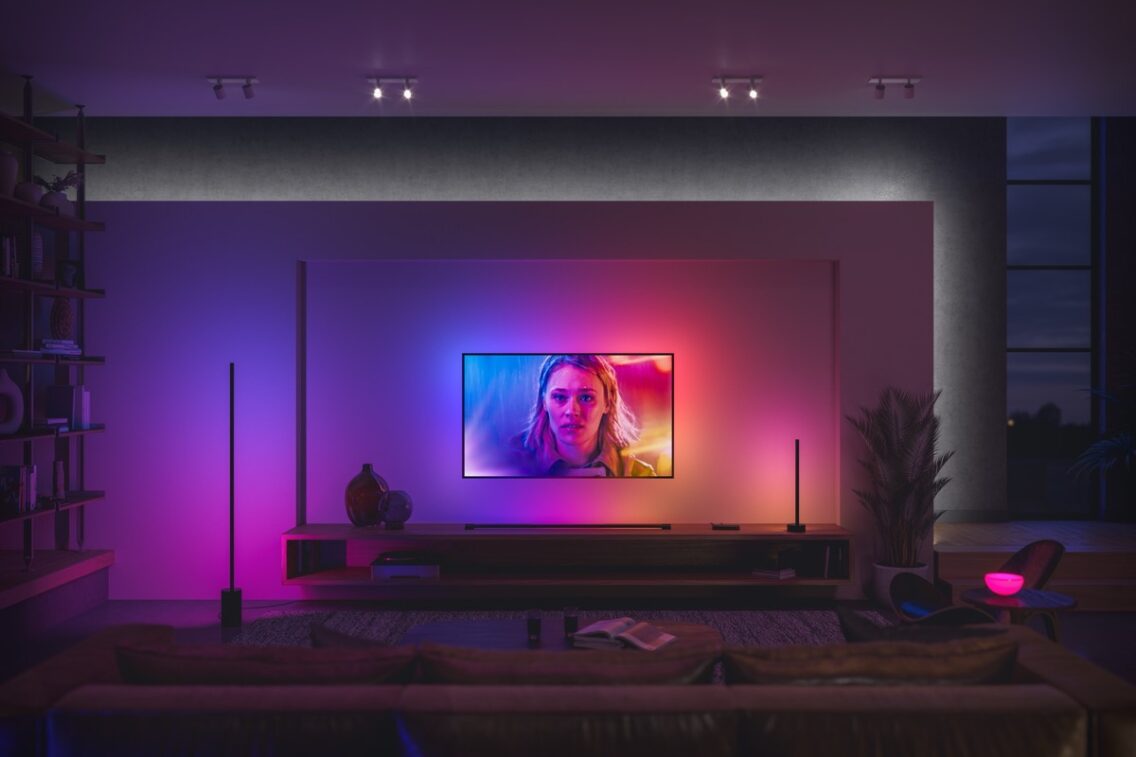 We’ve all heard of surround sound, but what about surround lighting? Philips is looking to take the TV viewing experience to the next level with the Hue Play HDMI Sync Box. This impressively matches on-screen content with your Hue lights. You’re also going to need to invest in either a set of Hue Play Light Bars or a Gradient Light strip to slap on to the back of your TV, in addition to a Hue Bridge (if you don’t already own one) for all this to work. It all adds up to a steep price, so is it worth the investment?

On the surface, the HDMI Sync Box looks like a fancy HDMI splitter consisting of four HDMI inputs for connecting source devices like a streaming box, blu-ray player and a games console as well as a single HDMI out for connecting to your TV. The content passing through the Sync Box is rapidly analysed and seamlessly translated to flashes of colour on any connected Hue light. For this reason, streaming apps built into the TV won’t work with the Light Sync effect.

The HDMI Sync Box essentially maps portions of the image on screen to different lights, so you need a spread of lights around the rear of the screen, as well as ideally elsewhere in your home theatre to get the full surround lighting effect.

You’ll want to make sure you have an unobstructed flat white wall behind the television for it to work effectively, so it’s not an ideal option for televisions located in a corner position, for example.

Disappointingly, the Gradient Lightstrip won’t cover the bottom side of the TV so you’ll want to augment it with another Hue light to avoid having a large dark void below the TV.

I already had a regular Hue Colour Lightstrip plastered behind an entertainment unit located directly below the wall-mounted TV. I was able to easily pair this up with the HDMI Sync Box to complete the look.

The Sync Box’s power brick smartly comes with two extra power outputs so you connect the Gradient Light Strip and another Hue light without taking up additional power points.

Sadly, the HDMI Sync Box doesn’t include a physical remote. There is an option to program key functions to a regular IR remote such as the one that comes with your television but I couldn’t get this working.

While the Sync Box boasts automatic HDMI switching, it isn’t particularly reliable. This means that you will need to resort to using the Philips Hue Sync app for changing inputs and adjusting the brightness of the lights. It does, however, support voice commands via Google Assistant, Siri and Amazon Alexa.

Things get a little more complicated if you’re using an AV receiver (AVR) in your setup. With your video inputs connected to the receiver rather than your TV, you could connect the receiver’s HDMI video-out cable to one of the Hue Play’s inputs. You’ll also need to remember to ‘enable ARC bypass’ within the Philips Hue Sync app.

Connecting it this way means you can use your AVR’s remote to switch inputs as usual, which is a big plus since the Sync Box doesn’t come with a remote. Just be aware that ARC can be unreliable and adding another device between the AVR and TV chain means potentially more issues. I encountered my fair share of HDMI ‘handshake’ glitches during the review period.

Alternatively, you could connect all your HDMI devices to the Sync Box and then connect the box to the TV’s spare HDMI input while keeping the TV’s ARC port connected to the AVR. Doing it this way kept issues to a minimum but, again, your mileage will vary depending on the AVR, TV and HDMI source devices.

You will need to use two apps to complete the setup process. The main Hue app is used to create an ‘entertainment’ area for assigning the Gradient Lightstrip and any other lights you plan to use with the HDMI Sync Box. The other app is called ‘Hue Sync’ which acts as the main interface for controlling the Sync Box as well as the brightness and intensity of the lights assigned to it. I hope that Philips eventually integrates the Hue Sync’s features into the main Hue app for a more seamless user experience.

The light sync feature will work with signals up to 4K at 60Hz or 1080p/1440p up to 120Hz if your TV supports it. It also supports light sync with all the main flavours of HDR including HDR10+ and Dolby Vision.

The Sync Box HDMI ports are limited to version 2.0 and, as such, do not support light sync with content delivered at 4K 120Hz. It’s an unfortunate omission given the increasing number of games on the PS5 and Xbox Series consoles that support 4K at 120Hz output, and the relatively steep price tag of the Sync Box.

The Hue Play Sync Box creates a surrounding light effect that looks incredible, with the bursts of colour capturing the intensity of the onscreen action beautifully. Dramatic set piece moments in your favourite movies and games really come alive, with a sense of immersion that is unlike anything I’ve experienced before. What’s more, the colour changes are impressively responsive, with no perceived latency.

The enjoyment isn’t just limited to special effects laden films or colourfully animated shows. The synchronised smart lighting does an equally convincing job of creating a sense of dramatic ambience in quieter scenes.

The Sync Box mostly nails the colour choices as well to the point that it feels like a natural extension of the content you’re watching. A wonderful side effect is that it can make a television seem bigger as colours leap off the edges of the screen.

I would go as far as to say that the smart lighting experience can elevate the sense of immersion just as much as a good surround sound system or a bigger screen can. It also adds something that even an actual cinema doesn’t deliver.

I was initially concerned that the lights would be more of a distraction and that it would blow out the picture but those fears melted away the moment I fired up the first show. Depending on your tolerance for flashing lights, you may need to adjust the intensity and brightness of the colours based on what you’re playing or watching. With action packed games like Halo Infinite, I maxed out the brightness and synchronisation intensity to better complement the on-screen action. Switching gears to a nature documentary like Planet Earth, I found adjusting the intensity down a couple of notches for a subtle transition of lights more suitable.

Of course, you won’t want to keep it on all the time as there would be little benefit to watching something like MasterChef or a daytime soap with synchronised smart lighting.  I defaulted to switching it on for any piece of content that I really wanted to immerse myself in.

The Philips Hue Play HDMI Sync Box delivers the most responsive and immersive TV-based smart lighting system on the market. If you’re looking to take your home theatre experience to the next level, the HDMI Sync Box should be at the top of your list.

The main issue with the HDMI Sync Box is the cost. To get started, you’re going to need the Sync Box ($500), a Gradient Lightstrip (starts at $400 for the 55-inch model) and a Hue Bridge ($100). The fact that the Gradient Light Strip doesn’t cover the bottom of the TV means you’re going to have to spend at least another $200 on a Hue Lightstrip or Play Bar to complete the experience. At that point you’re well over a $1,000 investment.

When you’re stumping up that much cash, you’d want it to have some element of future proofing. But the lack of HDMI 2.1 ports means gamers who are heavily invested into the new consoles such as the PS5 and Xbox Series X should wait until Philips release an updated Sync Box before going all in.

Philips Hue HDMI Sync Box
The Philips Hue Play HDMI Sync Box delivers the most responsive and immersive TV-based smart lighting system on the market and will take your home theatre to the next level.
Features
9
Value for money
7
Performance
9.2
Ease of use
8
Design
9
Positives
Synchronised lighting effect keeps up with the onscreen content flawlessly
Adds a sense of immersion to movies and games that is unlike anything else
Sleek and discrete box that can easily hide away behind the TV
Doubles as a HDMI Switch
Support for Google Assistant, Amazon Alexa and Siri
Negatives
Expensive
Lacks support for HDMI 2.1
No physical remote control
Light sync doesn't work with a television's built-in streaming apps or TV tuner
8.5