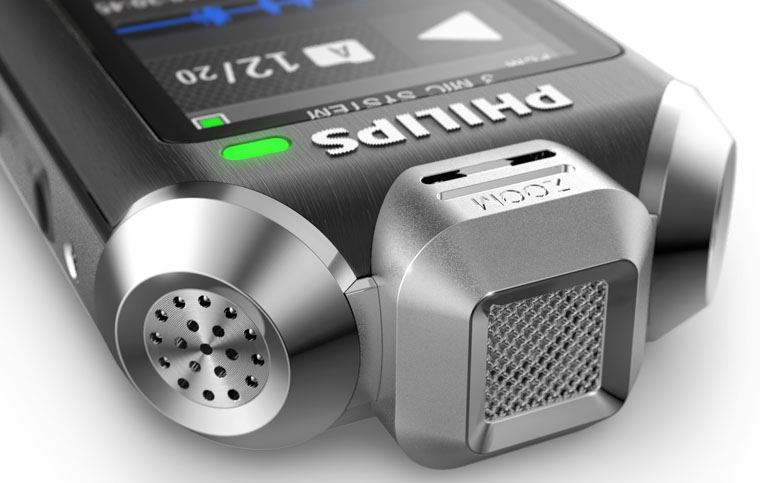 Philips calls them the ‘VoiceTracer’, but whatever the name they are the latest in the Dutch consumer giant’s line of digital audio recorders, with models optimised for several different functions: note taking, lecture recording, interviews, capturing meetings and even music.

The Philips VoiceTracer DVT8010 ($349.99) is designed for capturing meetings. It comes with a table-top “boundary layer” omnidirectional microphone to ensure every voice is recorded accurately. The recording level can be set automatically, and the unit can include in a recording the sounds from up to five seconds before the recording button is pressed.

It has 8GB of built in memory which can be supplemented with a 32GB microSD card. It can record in both WAV for high quality and MP3.  With the built in memory it can record up to 12 hours (WAV), and up to 2280 hours (MP3 at the lowest quality setting). For handheld use it has Philip’s high quality 3 mic system. Recordings can be transferred to a computer via USB. A 28mm speaker is built into the metal enclosure for easy playback. The built in Lithium Polymer battery provides up to 50 hours of recording.

For lectures and interviews Philips recommends the DVT6010 ($199.95) which is the similar to the DVT8010, except for desktop microphone. With the 3 Mic microphone setup, this model offers AutoZoom+ which increases noise rejection and effectively “zooms” in voices.

The Philips VoiceTracer DVT4010 ($159.95) is the next step down. It has a more basic colour display and it uses two microphones built in rather than a three microphone setup. It is targeted at ‘conversation recording’. To this end it incorporates the AutoAdjust+ feature to optimise for variable recording environments.

The DVT2710 ($199.95) and DVT2510 ($99.95) continue to feature similar specifications, except they have stereo microphones and use disposable AAA alkaline batteries and lack the metal construction. Recording time is the same as for the other models. The difference between these two models is that the former comes with Dragon Naturally Speaking voice recognition software. You will need a Windows computer for Dragon.

The DVT7500 is a quite different unit since it’s intended for music recording. It features a high quality three microphone assembly, but it also has a pair of XLR microphone inputs, so you can use external microphones of the very highest quality. MP3 recording is supported, but it is really intended for WAV format, which holds uncompressed PCM for, again, the very highest quality. High definition audio is supported, up to 24 bits of resolution and 96kHz sampling. Simultaneous line in/microphone in recording is supported. Such convenience factors as voice activated recording and variable playback speed are retained.

The internal memory has been doubled to 16GB, and the microSD card slot can support a card up to 64GB in capacity. Up to 30 hours of recording is possible with a single charge of the built in lithium polymer battery. The player function supports a wider range of audio formats, including FLAC (Free Lossless Audio Compression). The recorder comes with a windscreen for its microphones and a pouch.

Philips VoiceTracer recorders are distributed in Australia by Powermove Distribution.