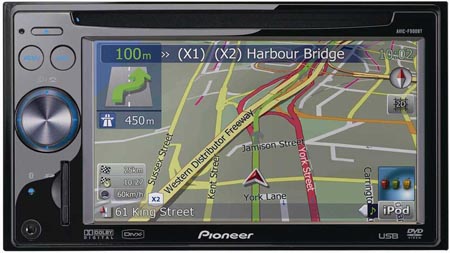 NOTE: This review covers both the Pioneer AVIC-F900BT and the F500BT, however the price accompanying this review refers to the AVIC-F900BT.

Pioneer’s latest range of slick, in-car navigation systems come with all the extras, including an excellent and mostly easy to use interface, large AV-capable screens and plenty more besides. They’re premium GPS units in a world that’s distinctly shifting towards cheaper units, but they do still represent value for money.

The F series Pioneer units come in two styles. There’s the more expensive F900BT ($1999), which is an installed navigation unit that lives in your car dash, and the semi-portable F500BT ($999), which includes an installed amplifier but can be made portable as the core screen and GPS system aren’t permanently installed, but instead sit on a flexible screen-mounted suction arm.

Both units feature Bluetooth for mobile phone synchronisation, along with navigation facilities that feature the latest Sensis map data for Australia. SUNA traffic support is provided in both units for those currently in Melbourne, Brisbane or Sydney.

Both units are also both capable of AV playback, although it’s here that the more expensive F900BT has more of a chance to shine, as it includes an inbuilt DVD/CD player that also supports DivX, Mp3, WMA and AAC audio files, as well as standard audio CDs. The F500BT does support those file standards, but lacks the optical drive, so you’ll have to have material prepared on USB Flash, SD card, or optionally a compatible video iPod.

While both units come with a MOSFET 50Wx4 Amplifier, the F500BT will require installation of its supplied unit, which leaves a small external cable to connect up to the GPS holding bracket.

The interface Pioneer’s chosen for the two GPS systems is a winner; it’s simple, fast and easy to discern. It’s even possible to add pinpoints and points of interest to your GPS maps direct from the touchscreen, including any red light or speed cameras you may notice along the way.

The large display makes map reading (in 2D or 3D) very easy indeed even if you don’t have a passenger to help you navigate. In similar fashion, the Bluetooth phone synchronisation went without a hitch in our test across multiple phone models, and the ability to copy contacts and use the screen as a large dialling pad is a definite plus.

On the AV side, we were impressed by the F500BT’s large screen, which actually makes watching video a pleasure rather than a squinting chore. While it’s not a new or unique feature, most other GPS systems that have included video have also had tiny screens, which largely defeats the purpose. At the same time, we’d advise people to keep their eyes on the road.

iPod connectivity is a nice plus, although we were unable to get an iPhone 3G or iPod Touch running the 2.0 firmware to both connect and play audio at the same time. To be fair, Pioneer’s compatibility notes only go as high as the 1.1.3 iPod Touch firmware.

We did hit one minor niggle with the F500BT we tested on the road, although it’s one that’s only partly Pioneer’s fault. It uses Sensis’ definition of areas by suburb, which is fine when you’re in big cities with well defined areas. In rural and regional areas, however, it still does this, splitting up towns into their subdivisions, even if the locals themselves wouldn’t describe where they live that way. As such, it can be a touch confusing finding some non-metropolitan locations, as it’s not possible to search by road name first; you must have the correct suburb name to hand.

At their respective price points, Pioneer’s clearly targeting the premium market, especially with the F900BT model.

Once you’re over that hurdle, and as long as you can deal with the somewhat obtuse suburb structuring of the search functionality (which may not affect some drivers at all), there’s an awful lot to like about both the F900BT and F500BT.