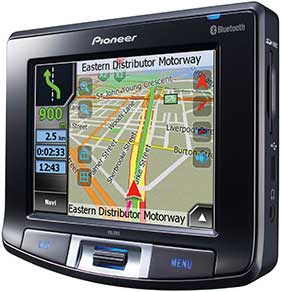 Pioneer’s AVIC-S2 is a very slick looking GPS system with excellent tracking fidelity and inbuilt Bluetooth to turn your mobile hands-free. It would be a better system if the car mount was a little more sturdy, but otherwise it competes very well in the crowded GPS market.

The AVIC-S2’s basic technical specifications are largely the same as its competitors; it uses the SiRFStar III GPS chipset, loads SENSIS provided map data from a supplied 512MB SD card. From mid-August Pioneer is selling additional cards with map data for Europe and the US, for $180.00 each per continent.

Red light and speed camera tracking for the AVIC-S2 available for free download via the Pioneer website.

So the AVIC-S2 doesn’t really stand out in technical terms. Why do we like it so much, then? Well, part of it comes down to the slick design, which is both pleasant to look to – far too many GPS systems just look functional rather than attractive – while retaining the same functionality as its ugly duckling cousins. We particularly liked the scroll wheel embedded at the bottom of the display screen, which allows you to quickly ratchet the volume up and down as needed. On the subject of volume, the AVIC-S2 also impressed with its range of voices – we grew particularly fond of Thomas, the UK/AU English voice, which has the crisp tones of an English butler. Half the time we expected to be offered cucumber sandwiches with our directions. It may seem like a minor point, but many “voice-capable” GPS systems have voices that are more reminiscent of Daleks than they really should be, so it’s worth noting systems that actually do get it right.

The other aspect of the AVIC-S2 that impressed us was its extreme fidelity when it came to tracking our test vehicle. The specifications for consumer GPS call for positioning within a range of 10 metres, but throughout our testing period we’d swear that the AVIC-S2 knew where we were to within centimetres; this made navigation that much easier, especially for complex turns.

There were a few aspects of the AVIC-S2 we were less impressed with. Like many SD-card based GPS systems, you can’t run the music player alongside navigation – and indeed, unless you want to risk the precious GPS map data by copying files to the 370MB of remaining space on the card, you’ll have to swap in an additional card. The mounting arm for the AVIC-S2 is also on the weak side. It’s hard to correctly place the unit, and the positioning of the power supply doesn’t help any in this.

You’re spoiled for choice when it comes to GPS systems, and Pioneer needed a standout unit to even be worthy of consideration. To their merit, that’s what they’ve produced. While the AVIC-S2 isn’t without its faults, the key aspects of its operation work so well that it’s an easy GPS to recommend to any regular vehicle commuter.