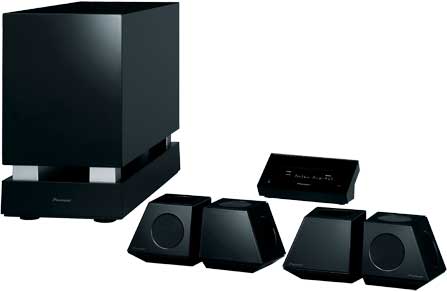 At a time when Blu-ray is only just beginning to settle in, Pioneer has come up with a home theatre audio package perfectly suited to the new format. Essentially, the Pioneer HTP-LX70 is a home theatre speaker package and home theatre receiver combined.

The receiver part is built into the subwoofer, except for a compact display unit tethered by a long cable, which can be placed out in the open. In addition to providing information on what the unit is doing, this acts as the remote control detector.

Nothing too surprising about this, you may think. Except that since when has such as system had HDMI inputs and outputs? Three HDMI inputs, in fact. Analog connectivity has been pretty much abandoned with this unit, aside from two analog audio inputs (there are also two optical digital audio inputs). Aside from HDMI, there is no video switching.

Using the HDMI inputs, full decoding is provided for Dolby Digital Plus, Dolby TrueHD and DTS-HD Master Audio, the new higher quality formats provided on Blu-ray. Of course, it also supports regular Dolby Digital and DTS, along with the high quality multichannel PCM provided by some Blu-ray players.

The display panel has an iPod connector on the back and a suitable cable is included with the unit.

Eight 50 watt digital amplifiers are built into the subwoofer, for a total of 400 watts, although this is at a very high 10 percent distortion.

All cables are provided and connections are fairly easy because they are colour coded. Once this was done and the HDMI connections made, everything become really, really easy. That’s because Pioneer has included its Auto MCACC setup feature. Plug in the supplied microphone, get this going and after a few minutes all the speaker settings have been made, including room and speaker equalisation.

The results from this were excellent, except that I found the upper bass perhaps a little too full for my taste.

Despite there being no onscreen menu, the information from the display panel was sufficient for regular purposes. This even indicated what the unit was decoding – including Dolby TrueHD and DTS-HD Master Audio. The decoding worked perfectly, including with high specification 96kHz multichannel tracks.

I wasn’t expecting much from the sound. The satellites are very lightweight, and while attractive looking, do seem a little flimsy. But they certainly didn’t sound at all flimsy. In fact, they were startlingly good.

Oh, the extreme upper frequencies were probably not there, and there was definitely a certain ‘airiness’ for some centre channel content that isn’t evident when a dedicated centre channel speaker is used. Still, it went loud and was almost spookily convincing in its surround sound envelopment. The bass was plenty strong enough, although not enormously deep. Few will notice the absence of the bottom octave since few movies call upon this anyway.

So far as I know, this is the only compact system of its kind presently available with the capability of handling the new audio systems from Blu-ray. That alone would bring it a strong recommendation.

That it does this job well, just makes it that much better.