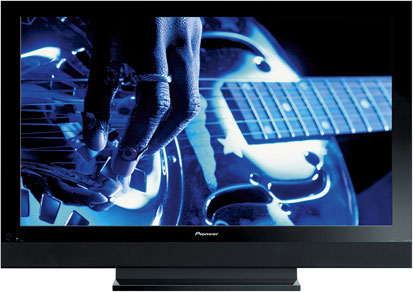 A ‘budget’ plasma TV from Pioneer? Doesn’t seem likely, does it. But that’s what the Pioneer PDP-C509A is.

Okay, let’s be serious here. Budget for Pioneer means a couple of thousand dollars more expensive than similar sized, similarly specified TVs from some other brands. What you do get for the extra dollars is the Pioneer edge – sheer picture quality.

You may recall our recent review of the Pioneer Kuro PDP-LX609A TV. We described this as “about as good as you can get today. Indeed it’s hard to see how it could get any better.”

The PDP-LX609A152 cm/60 inch is expected to be supplemented by a 127 cm/50 inch model, the Kuro PDP-LX509A, which is identical but smaller. The TV under review here, the Kuro PDP-C509A is very similar to this forthcoming 127 cm LX model, according to Pioneer, but offers black levels only “somewhat”, rather than “five times”, better than the previous eight generation models, and loses the multimedia support, which includes both Ethernet and a USB memory card reader. The present TV retains the USB socket, but this is used only for upgrades, not multimedia.

Otherwise, you still get three HDMI inputs, both an analog and HD digital TV tuner and, as far as I could see, identical video processing capabilities as those provided in the higher level models.

The plasma panel itself offers full high definition resolution with 1920 pixels across by 1080 vertically. I would love to tell you about contrast ratios and brightness levels and so forth, but Pioneer has abandoned the practice of providing these specifications. It says, not altogether unreasonably, that they are becoming increasingly meaningless.

I plugged in this TV and found myself startled anew by the excellent picture quality. Drawing on my memory of the black levels from the PDP-LX609A, I suspect that this TV didn’t quite match it. Nevertheless, when I played my favourite test Blu-ray disc, the brightly coloured foreground objects floated over the black background as though sitting on a black velvet cushion. When full-black screens appeared, with my viewing room completely darkened, there was a slight, neutral, glow from the panel. But this wasn’t enough to detract in even the smallest way from picture detail during dark scenes.

Consequently the TV’s colour performance was excellent, yielding natural tones and considerable image ‘depth’. This was aided by the excellent scaling from standard definition resolutions. However there was a clear improvement with true high definition material, as you’d expect from a true HDTV.

Blu-ray and HDTV were excellent, with the precise quality of the source being transparently revealed by this TV in every case. Full 1080p24 (24 frames per second) support is provided for smooth motion from Blu-ray movies. And special notice is required for Pioneer’s superb video processing. With 1080i material from a test Blu-ray disc, it did as good deinterlacing as any TV, Blu-ray player or video processor I’ve yet seen. With 576i material from PAL DVDs, it delivered better deinterlacing performance than any other device I have seen, regardless of price, except for the other Pioneer TVs.

In a word: brilliant.

Okay, I withdraw that word first used to describe this television. The Pioneer Kuro PDP-C509A is not a ‘budget’ TV. It is a magnificent 127 cm plasma TV that is among the best in the world. It omits network and USB connectivity, but is that really important to you? It isn’t to me.