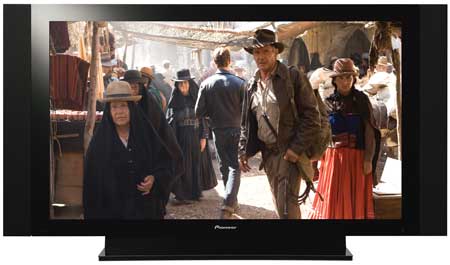 NOTE: The Kuro PDP-LX609A plasma TV was reviewed in concert with the Pioneer BDP-LX71 Blu-ray player, but the ratings, pros and cons, pricing and specifications published here are those of the Kuro PDP-LX609A alone.

Pioneer has not been one to play the electronics-as-a-commodity game. Instead it has chosen to service the end of the market mostly concerned with quality. Nowhere is this more evident than with its full high definition PDP-LX609A plasma TV, and premium BDP-LX71 Blu-ray player.

When you’re developing a premium quality TV, you can go for a large feature set, or aim for superb performance, or opt for sheer size. What the Pioneer Kuro PDP-LX609A offers is all three in the one package.

Pioneer is a little coy about its performance measures, refusing to specify for example a contrast ratio. I have quite a bit of sympathy with this, because when you are talking about recent claims of one million to one, you are getting into unmeasurable territory. So see below for my take on this TV’s performance on such matters (a preview: it’s simply brilliant).

So it’s big, and it has performance. But there are also features. Such as a high definition digital TV tuner, along with an analog one. Such as a USB socket, from which you can display photos. Most impressively, such as an Ethernet socket which is ‘DLNA’ certified. DLNA is a widely based industry standard designed to allow easy connection of consumer electronics to computer networks. In this TV’s case, it can play back a very wide range of multimedia formats covering photos, video and sound.

It’s difficult to be quite so unequivocally enthusiastic about the features of the BDP-LX71 Blu-ray player. After all, it costs more than twice as much as very respectable Blu-ray players from some other brands, yet lacks the most advanced feature of those lower cost players: BD-Live. That is an internet connectivity feature that allows additional material to be downloaded for some Blu-ray discs.

If, however, you like to keep your internet and your home entertainment in separate domains, then this will be no loss to you. What you do get is more important: BonusView support. That is the picture-in-picture, sound-in-sound function that is starting to be inventively used on a number of Blu-ray discs.

As I write, the unit has full audio decoders for Dolby Digital Plus and Dolby TrueHD, but not (like just about every other player) for DTS-HD Master Audio. However Pioneer promises to have a firmware upgrade available for the unit in January 2009 which provides this capability as well.

This will allow the unit to provide the maximum possible audio quality – delivered via either its 7.1 channel analog audio outputs, or via HDMI as 7.1 channel PCM – even while the PIP features are being used. Most players fall back on the standard DTS ‘core’ when called upon to do this.

Instead of the usual push buttons for eject, stop, play and so forth, the Blu-ray player has touch sensitive patches on its front for these controls.

So how well did these premium products work? In short, the Blu-ray player worked very well, and the TV worked absolutely brilliantly.

To dispose of the minor stuff first, the TV’s DLNA functionality worked precisely as it was supposed to. The picture quality from still photos was excellent, with the full resolution of the TV used. And the TV did indeed play back the thousands of MP3 tracks on my computer once I had connected it to my home computer network. It’s best to feed these back to a high quality sound system using the TV’s optical digital audio output. After all the TV has, well, TV speakers: fine for their purpose but definitely limited when it comes to music.

The TV tuners worked well, but the brilliance of this TV resides mostly in its plasma panel, and the electronics that drive it. As mentioned, Pioneer doesn’t specify the TV’s contrast ratio. In fact, it delivered black levels that result from a true absence of light, rather than a mere diminution. Even when there were bright elements on the screen, the parts of the picture that were supposed to be black remained so. This was particularly easy to spot, seeing as how the picture was so damned large! It was almost like having a front projector, but without its disadvantages.

The picture was plenty bright enough, and the colours were extraordinarily natural in their appearance.

One of the reasons for the great picture was the superb processing of video provided by the electronics. This did brilliantly on deinterlacing both 1080i and 576i video, whether delivered from a disc player, or by the unit’s own built-in digital TV tuner. TV has never looked as good as it did with this unit… even with SDTV!

The BDP-LX71 Blu-ray player also performed flawlessly. I have one complaint: while noticeably faster than previous Pioneer models, it remains one of the slowest of those released over the past few months. Part of this is just silly design: why should it take 30 seconds to open the disc draw from switch on? This ought to happen as soon as power is applied (if you start it up by touching the ‘open’ spot on the front panel). The machine initialisation process should continue while this is happening.

That said, this unit has a number of unique virtues (especially now that Sony is no longer using Pioneer players as the guts of its). The main one is the on-the-fly resolution control function provided on the remote control. Other BD players we’ve seen force you to stop play in order to alter the resolution settings, or to go into the setup menu. Pioneer just does the whole thing with a couple of remote control keys. This offers no real advantages in practice, as with the output resolution set to ‘Auto’, the unit does a fine job (1080p24 during Blu-ray movie playback, and 1080p50 or 60 for everything else). Still, I think it’s cool.

The picture quality was immaculate, and not just with Blu-ray discs; the unit did a respectable job with PAL DVDs. You can adjust the video display parameters (and apply a number of various noise reduction processes) using a dedicated key on the remote control. There are a number of video presets and three user memory settings that are very convenient. But if you purchase these two units as a package, you should choose the ‘Pioneer PDP’ setting, which of course optimises the player for top performance with this Pioneer TV.

One little extra offered by this player that puts it ahead of most of the others: transport controls. Want to do an A-B loop? This unit supports it for Blu-ray in addition to DVDs. If you pause a Blu-ray (or DVD, of course), you can frame step both forwards and backwards. That makes finding the specific frame you want easy. You can even do an A-B repeat loop on a Blu-ray.

The Pioneer Kuro PDP-LX609A TV is, truth be told, about as good as you can get today. Indeed, it’s hard to see how it could get any better. The BDP-LX71 is an excellent Blu-ray player in all respects… except for its failure to support BD-Live functions. But if that isn’t something you’re dying for, then you will be pleased with this player.