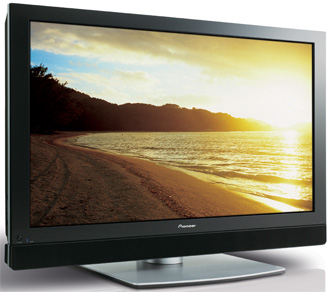 Pioneer has been building plasma displays at least as long as anyone else and is now, with the PDP-507XDA, up to its seventh generation. Let there be no doubt about this: the PDP-507XDA is the best plasma TV I’ve ever seen, with the sole exception of Pioneer’s PDP-5000EX true high definition plasma display.

Unlike that $11,000 unit, this $5,800 model offers the standard ‘high resolution’ of 1365 x 768 pixels on its 127 cm plasma panel. Pioneer modestly claims a contrast ratio of 4000:1 and the unit comes supplied with attachable speakers and your choice of desktop stand or wall bracket.

It also comes with free installation and a demonstration, plus a full five-year warranty.

Previous generations have included a separate Media Box, which carried all the inputs and the (analog only) TV tuner, and connected to the screen via a dedicated digital cable. With this model Pioneer has included all those capabilities in the panel itself, and added a high definition digital TV tuner.

If you glance at the specifications tab for this product, you will be impressed by the sheer number of inputs. But in fact only four sets of inputs are available (not counting the PC input), since most share composite, component and S-Video on the same input selection.

The digital TV tuner has both auto and manual scan features. The first rapidly and successfully acquired all the stations in my area.

There is a good set of picture and sound controls. You also have the ability to switch Pioneer’s own Pure Cinema de-interlacing circuitry on or off if necessary for certain problematic videos.

Lacking are adjustments for picture scaling, so you are stuck with a small amount of overscan on all four edges of the picture.

I could live with that because of the magnificent performance of this TV. The digital TV tuner worked reliably, pulling in distantly transmitted, relatively weak signals, with no blocking or other signal interruptions.

The panel performance is top of class as you’d expect from Pioneer. Even though its contrast ratio claims don’t reach the heights of some of the competition, I couldn’t pick the difference. Blacks were excellent, and fine graduations within them nicely clear.

Perhaps the most important part of great panel TV is not the panel itself, but the electronics behind it. And it is here that Pioneer has really excelled. The scaling of the incoming signal, whether from digital TV or from an external DVD player was gloriously smooth, with even and subtle shadings, no nasty contrast enhancements, and cleanly etched lines upon the screen.

The TV correctly recognised my difficult test signals, fed in interlaced form via S-Video, as being progressive, so it preserved their full resolution, allowing it to extract detail that many other TVs simply omit.

The TV does not support 1080 progressive scan at either 50 or 60 hertz, as output by current generation Blu-ray and HD DVD players, but it does support the better 24 hertz version which should be appearing on next-generation players.

That’s not to say that it won’t work with current Blu-ray and HD DVD players. It’s just that you’ll have to make do with 1080 interlaced until the new, better, players appear. In the meantime, 1080i support still provides an excellent picture.