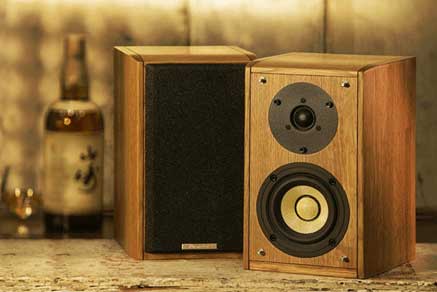 Note: This product was reviewed as part of a combo system, comprising the Pioneer D6 SACD/CD player, the A9 Integrated Stereo Amplifier, and the Pure Malt speakers. The rating given is for the system as a whole.

Pioneer has been in the high fidelity game since the 1930s, but in recent years you may not have noticed, since it has been focusing, at least in its Australian product line-up, on plasma TVs and DVD players. These, to be sure, have been among the pick of their categories for quality, but it is good to see the company now returning to its roots with marvellous high-quality audio products.

And that’s just what this system is: audio only, and very high quality. In fact, it?s stereo. The three different parts need not be purchased together, but we thought it would be nice to link up a one-brand stereo system and run it through its paces.

So what do we get? First, the source device: the D6 SACD/CD player. As its name implies, it plays the Super Audio CDs in addition to the regular variety. However, this is a purely stereo device, so you won’t get multichannel SACD sound out of it. You will, though, get the extended bandwidth and greater resolution of SACD.

In addition to its stereo analog outputs, it has both coaxial and optical digital outputs. These will not work with SACD though, so you should use the analog outputs unless you have a high-grade digital-to-analog converter you wish to use for your CDs. Like the A9 amplifier, it has a backlit LCD display. This shows track and timing information. The front panel is minimally populated, with just three control buttons: power, close/eject and stop/start. Both the amp and the player are certified by the London-based Air Studios for optimal audio performance.

The A9 integrated amplifier continues the minimalist theme. The front panel has an input selector knob (there are five in total), a volume control, a power button and a ‘Direct’ button. The latter switches out all processing except for the volume control, and also switches off the LCD display.

The amp offers 55 watts from each of its two channels, both channels driven, into 8 ohms. It has wonderfully large binding posts for the speaker wires that, for once, are a joy to use.

The amp also has a phono input, and accepts the signals from both moving magnet and the much lower output moving coil cartridges. There is a switch on the back to select.

And then there are the Pure Malt loudspeakers. Why the name?

Loudspeaker enclosure materials have been wrestled with for decades. You need a dead, yet rigid, material for the box. It should not resonate, nor should it have much if any give, so that the acoustic tuning of the loudspeaker will be maintained, and the enclosure will add no colouration to the sound.

The great majority of modern quality loudspeakers use medium density fibreboard for this purpose. The Pure Malt speakers use white oak from trees at least a century old. Yes, actual chunks of grained wood from actual trees. But they have been treated before use, namely by serving for five or more decades as barrels for Suntory whiskey. Following their retirement from that function, the panels have been steamed flat and further treated to take up their new role as loudspeaker enclosures.

Make no mistake about it: they look absolutely gorgeous, with a kind of rustic charm.

As far as the technical stuff goes, each carries a 20 mm tweeter and a 100 mm woofer, and the cabinets are bass-reflex loaded.

The important thing is how all this sounds and works.

Both the player and the amplifier come with small, flat remote controls. Both worked well with their respective units. It was a bit disappointing that both didn’t carry the controls for the other unit, since it meant having to pick between two very similar looking remotes, depending on what I wanted to do.

Despite the paucity of controls on the front panel of both units, they do in fact have plenty of controls on their remotes. The D6, for example, has all the expected programming – random play and so forth – capabilities. It also has a key to allow you to select between the SACD and CD layers on hybrid discs, although it’s hard to see why you would choose the latter.

The A9 also has tone controls accessible by the remote. I didn’t touch these. In fact, I bypassed them using theDirect key, for the purest possible sound. There is nothing digital in the A9. Even the volume control is analog, with a small motor rotating a conventional analog knob in order to change the level.

And as for the sound, the Pure Malt speakers, running off this system, were very attractive. My SACD collection (why use CDs when this is available?) is mostly classical, but I do also have the utterly necessary SACD of Pink Floyd’s Dark Side of the Moon.

With the classical, the sound was gorgeously smooth. Pieter Wispelway’s cellos on Channel Classics SACD CCS SA 16501 was gorgeous. It was well articulated, without any undue emphasis on the upper registers, while the bass was adequate for the deeper strings. The imaging of this SACD is not particularly realistic, since a wide stage is granted to the solo cello, but nevertheless, there was depth and reasonable focus.

With Dark Side, the imaging sharpened up, and more depth introduced into the sound. The only significant lack was deep bass, and a slight susceptibility of the speakers to being limited in level by the presence of deep bass. I initially played the money track, Money, at a satisfyingly high level. There was a little harshness, even in the complex sections all elements remained clearly audible. But keeping the volume at the same high level, and skipping back to the heartbeats at the very start of the SACD, there seemed to be a slight echoey thump just before the main theme commenced, as though the woofers were bottoming out.

So watch the level where deep bass is present.

It was never in doubt that Japanese companies can make fine electronics. But who said that they couldn’t do speakers well? The Pure Malt speakers are excellent sounding, compact loudspeakers, which really do lack any sense of colouration, and are extraordinarily beautiful to the eye.

Overall
Features
Value for money
Performance
Ease of Use
Reader Rating0 Votes
Clean and articulate performance from speakers, solid stereo performance from the electronics.
Speakers are a little insensitive so they require decent reserves of power from an amplifier, remote controls would be better if combined into one.
4