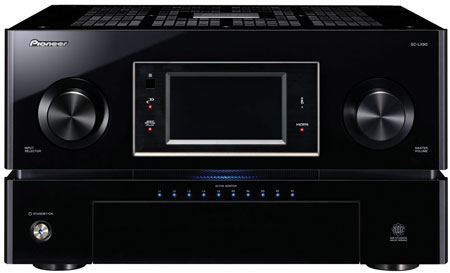 Well, Pioneer has pulled all the stops out on this one. Its ‘Susano’ SC-LX90 home theatre amplifier offers no less than ten channels of amplification, and connectivity that must exceed in versatility that of every other comparable amplifier.

Each of those amplifiers is rated at 140 watts and thanks to the highly efficient ‘IcePower’ digital amplifier technology, all ten can run to full power at the same time.

The amplifier has – get this – six HDMI inputs, lots of analog ones and plenty of regular digital audio inputs. Less commonly, it also supports phono input, radio frequency Dolby Digital from late model 30 cm LaserDisc players, and even iLink connections from Pioneer’s own universal disc players from a few years ago.

On the front panel it has a 12.7 cm diagonal 16:9 LCD screen upon which you can watch – not that you would, but it is cute – the actual video program being fed through the unit. But only if it is being delivered by an analog connection. It doesn’t work for HDMI. Generally the screen is used for program information and menus, but if you choose to house the Susano in, say, a projection room or equipment cabinet out of sight of the display in the main viewing area, it can be used to cue movies, ready for screening.

The unit can decode any sound, pretty much, from every digital disc format. That includes the new Blu-ray standards of Dolby TrueHD and DTS-HD Master Audio, and older multichannel formats such as that used on Super Audio CDs.

This amplifier is AIR Studios (founded in 1965 by Sir George Martin, aka the fifth Beatle) certified for sound quality.

The only difficulty in installing this home theatre amplifier was in reaching over its considerable bulk to manage the rear connections. Even that was eased a little by the widely spaced, well-constructed loudspeaker terminals.

Once that was done, all that remained was running Pioneer’s ‘Auto MCACC’ calibration system. This automatically set the speaker sizes, delays and loudness levels, and adjusted the tonal balance to provide optimum performance within the listening room.

And that optimum performance was what it indeed provided.

I used the system primarily in 7.1 channel mode and it ran flawlessly with DVDs, Blu-ray and SACD. Even with the heavy data load of the soundtrack from the Blu-ray version of Hairspray (DTS-HD Master Audio, 7.1 channels, 24 bits) the sound quality was immaculate, with excellent punch from the loudspeakers.

The six HDMI inputs were very welcome since I normally have at least half a dozen HDMI-based source devices, and the amplifier worked perfectly with them all. It also worked with three different front projectors, a large plasma display and a small LCD TV.

In short, it offered complete reliability with every device I connected it to, including my computer network, and the thousands of MP3 tracks available there.

The Pioneer Susano SC-LX90 home theatre amplifier is certainly not inexpensive, but if you want high performance within your room, complete reliability, access to computer-based digital media, and still have some amplifiers left over to pipe music to another room, there aren’t too many other choices. If you have a LaserDisc player that you still use, then there are no other choices!

A final word: The LX strategy

Imagine you’re a manufacturer selling your gear through both mass market retailers and specialist retail stores. Your specialist dealers complain they can’t compete with the heavy discounting offered by mass market retailers and refuse to stock your product. They need a point of difference in order to keep their customers, and you need both types of retailer to range and promote your brand, so what do you do? You get smart and divide your product range into standard and premium lines, with mass market stores retailing the former and specialists stocking the latter.

Many consumer electronics nameplates adopt the strategy – think Sony’s ES line-up of AV receivers, Onkyo and Integra receivers, and Yamaha’s RX-V and Z series amplifiers. Similarly, the ‘LX’ range is Pioneer’s premium offering, “born companions”, it says, to its highly regarded Kuro plasma panels, “both technologically and aesthetically”. The line-up includes a Blu-ray disc player (LX BDLX71), home theatre system (HTZLX61) and two AV receivers (SCLX81, SCLX71) that sit below the flagship Susano. This was four years in development and is named after Susano-oh, the Japanese god of storms and sea.