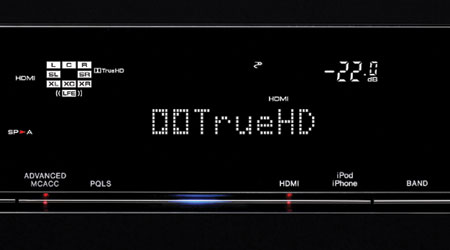 Pioneer’s VSX-1020 has beaten most of the competition in dealing with the newest feature to hit home theatre: 3D. But it also migrates several high-end features down to a mid-priced home theatre receiver, and adds one very new one.

This is a full 7.1 channel receiver. Pioneer has highlighted some weird power output specifications into low impedance speakers at unacceptable distortion levels. I figure the 65 watt figure shown in the specs is a good comparison number.
The channels nominally intended for surround back can instead be used to drive Zone 2 (composite video is also provided to support a video source in this zone), or to bi-amplify the front speakers, or to drive front height speakers for the built-in Dolby Pro Logic IIz. The receiver actually provides a separate set of spring clip speaker terminals for some of these uses (the rest are real binding posts), so that you don’t have to rewire the speakers to change to a different mode.
Of course, it also handles all audio standards offered by Blu-ray, and all the video standards as well, as delivered to one of its six HDMI inputs (one on the front panel).
More surprisingly, out of the box it supports iPods, thanks to a bundled adaptor cable. This plugs into a composite video input and USB socket on the front panel of the receiver. With this in place you have full control over the iPod via the receiver’s remote control. The unit displays menus on an attached display, and also cover art. It would not play videos from a 5G iPod, but it would from a current model iPod Touch (the same video in both cases). It doesn’t support photos.
Also provided is Internet radio, and the new feature: remote control via an iPhone or iPod Touch.

There is a lot to cover, so let me start by briefly covering the real purpose of a home theatre receiver: providing great movie and music sound. Once I’d run Pioneer’s Auto MCACC automatic calibration system –
a quick process – the receiver had my speaker system operating optimally.
With the high quality speaker system I was using, the receiver provided plenty of clean power for high volumes and very good sound, despite the weird power output specifications. The receiver also did a particularly good job on handling video, using high quality Anchor Bay Technology processing to perform progressive scan conversion.
Internet radio had a quite unusual implementation. Generally these work via an Internet radio station aggregator that provides named access to the thousands of stations. But this one requires you choose from a preset list of 24 stations, or edit them to your preferred stations by entering names and URLs.
A little time with Google can find the required information, and you can edit using the remote (yuck!), a keyboard plugged to the front panel USB port (better), or via your Web browser (the best, since you can copy and paste). Indeed, the only access to the receiver from the Web browser is the edit screen for these radio stations.
The iPod Touch/iPhone remote control function requires the receiver to be plugged into your network and for the network to have WiFi. You will have to download a small application for the devices, but this provides access to an eclectic range of control functions. That’s a polite way of saying that the bits that are provided work so well, it would be very nice if a full range of functions were provided.
For example, I could select ‘Internet radio’ as an input, but I couldn’t select the particular one of the 24 available stations I wanted to listen to. I could adjust the balance of the sound between left and right, and front and back, simply by turning the iPod touch around. But there was no way to invoke the onscreen menu.

But it is early days after all. I imagine there’s no reason why the control features can’t be extended to do everything that can be done via the receiver’s front panel or remote or menus. Meanwhile, this is a receiver ready for 2010 and its 3D high resolution video.
Overall
Features
Value for money
Performance
Ease of Use
Reader Rating0 Votes
Supports 3D video signals; Supports iPod; All digital audio standards supported Zone 2; Internet radio
No 7.1 channel analog out (for upgrading amplifier)
4