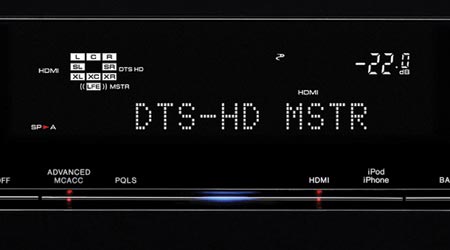 Recently, we looked at this receiver’s big brother, and the fact is that is isn’t really any bigger than this one. The Pioneer VSX-920-K is surprisingly full-on with features. The main one of interest here is that it has full 3D video support, passing it through very nicely from Blu-ray player to TV, while pulling the sound out for its own purposes.

Those purposes are extensive, since the unit supports the latest audio processing systems, including Dolby Pro Logic IIz. Perhaps surprisingly, there are no preamplifier outputs for the ‘front height’ speakers used for this. Instead you have to redefine the two amplifier channels which would normally power the surround rear channels.

Despite the low cost, this receiver has an Ethernet port which serves two main purposes. One is to provide Internet radio (for some reason, playback of media from the attached network hasn’t been implemented), while the other is to support what is presently a Pioneer-only capability: remote control from an iPhone or iPod Touch. This works via those devices’ abilities to connect to a WiFi network. The iPhone app Pioneer has developed for this purpose provides fairly basic functions, but is kind of fun to use because it employs you tilting and twisting the iPhone (or whatever) to make the adjustments.

In addition to the Blu-ray 3D support, the unit offers very good quality video thanks to the Anchor Bay Technology video processing. This can convert analog video to HDMI, and upscale both analog and HDMI video to full 1080p.

Audio-wise, the receiver was competent in my medium-large listening room with average sensitivity speakers. I would have liked the addition of a set of 7.1 channel line outputs to allow an upgrade on the power front.

That aside, the Pioneer VSX-920-K receiver is a fine unit, at a particularly good price.