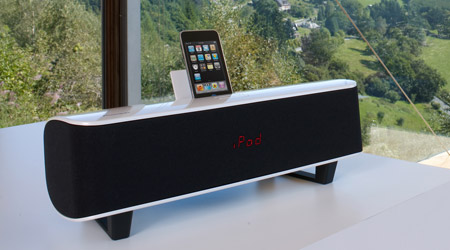 Pioneer’s NAS5 is one part soundbar, one part iPod dock, with a size that removes any question of portability beyond moving it from one room to another. Like the Geneva Model S, its dock connector hides under a flap, although this is strictly a lift-it-yourself affair. At $899 RRP this is a premium priced dock option, but it does bring with it plenty of features not found on cheaper units.

Bluetooth is an optional extra via a dongle that plugs into the rear of the unit, although we weren’t able to test that particular feature. The premise is to allow you to wirelessly transmit music from Bluetooth devices, such as mobile phones, for playback on the dock.

The rear also houses composite and component video output ports, giving this dock a little more flexibility if you’ve got a TV nearby and have photos or video you want to show off in larger detail.

One feature that does appear a little cheaper than the NAS5’s price point might suggest is the remote control, which is credit card sized. It does work, but it feels flimsy and inconsequential. One concession to price here is that a wall mount is supplied for the remote, so it shouldn’t be lost in five seconds flat.

One truly gimmicky part of the NAS5 offering are what Pioneer calls Soundscapes. These superimpose additional sounds over whatever you’re listening to, whether you’re in the mood for beach waves crashing over your tunes, or the sounds of cars going by. Retro audiophiles may get a slight warm glow from the setting that simulates LP hiss and crackle, but frankly if we wanted to listen to music with lots of audio interruption, we’d go outside. The NAS5’s AC power tethering rather makes that a non-starter.

Thankfully, Soundscapes are disabled by default, and without them in place the NAS5’s audio output is solid, aided by the integrated subwoofer driver which has enough room (thanks to the NAS5’s larger than average enclosure) to pump out some solid bass. The NAS5 also worked better than most docks, actually filling a room with music rather than just a small area in front of the dock.

If you’re after a full room solution but space prohibits a sound system incorporating docking functionality, this is a good middle ground.