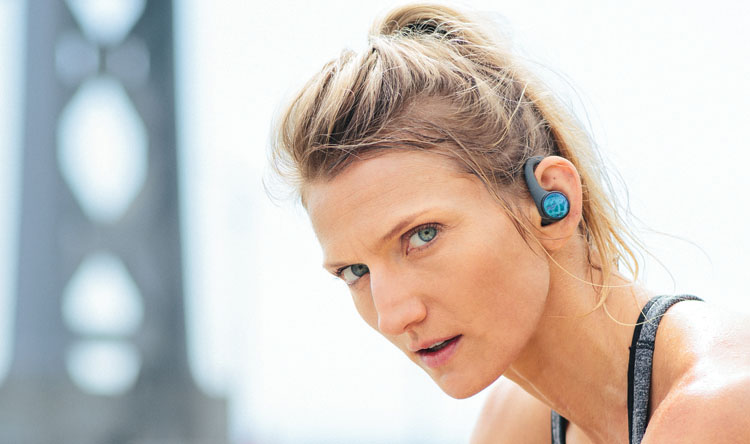 With the BackBeat FIT 3100 earphones, Plantronics continues with its habit of producing high performance ear gear at reasonable prices. See here for some other models we’ve looked at in recent times.

Each of the earbuds contains a surprisingly large 13.5mm driver, seemingly of conventional dynamic design. Each weighs 22 grams.

They are unusual in two ways. First, they come with fixed loops which go around the wearer’s ears. Second, the silicon tips – they’re bright red – aren’t replaceable. As we’ll see, that’s because they are not designed to plug fully into the user’s ears. The loops hold them loosely in place, but there’s no real seal.

True wireless earbuds routinely come with a charge case. Because they have a limited run time on their own – too big a battery would make them too heavy – the case provides multiple recharges. In this case, there are two additional charges available in the case. The run time is specified at an unusually long five hours per charge. (Also, a 15-minute quick charge in the case gives an extra hour of listening.)

These cases are typically hard plastic affairs. The Plantronics one isn’t. It has a zipper and a leather-look finish. It looks much more like a soft carry case than a charge case, and it ought to be safer when dropped than those with hard plastic cases.

The earphones clip into place securely within the case. Oddly, when you open the case naturally, the right earpiece is on the left and the left one on the right. I guess it doesn’t matter. I soon got used to it.

They work with the same phone app used by the Plantronics BackBeat GO 410 earphones, which we reviewed a few days ago.

So, you pull them out of the case and pop them around and into your ears. These earphones do not seal up your ear canal. Or, at least, they certainly didn’t seal up mine. That seems to be intentional in the design. You are supposed to be able to hear what’s around you.

When you put them on you’ll hear three messages. They will announce that they are powered on, along with their battery level: high, medium or low. The right hand one says, “headset connected”, which means that the two buds are connected to each other. The other says, “phone connected”, and then you’re right to go.

Now, of course you’re going to have to work out how the controls work. Fortunately, there’s a manual within the BackBeat app. Unfortunately, it’s a bit misleading at the start. It tells you, for example, that the Play/Pause button is on the right earbud. But, no, it’s actually on the left earbud. The controls are the other way around than indicated by the user guide. At least, that’s how they start. Within the app’s settings you can switch the earphones to work the other way around. Nonetheless, it did have me a little confused at the outset. (The printed Quick Start Guide has things the right way around.)

By default, play/pause and track skipping, answering calls and hanging up, invoking Google Assistant or Siri and pairing are all managed from the left earbud. The right earbud is for changing the volume. But earbuds have a click button – the whole surface – and are also touch sensitive. To play/pause, you click in the left earbud. To turn up the volume you tap the right earbud. To turn it down, you tap and hold.

There are two downsides to the non-sealing design. The first is that deep bass is limited. The second is that sometimes there’s too much environmental noise to hear things clearly through the earphones. When I was listening to podcasts, occasionally a bus would drive past me, drowning out the program. But the upside was that I was never in danger from things around me due to not hearing them.

The only other wobble was an issue that affects most, perhaps all, Bluetooth earphones. I went wandering around a shopping mall on Boxing Day. The mall was seriously chock-a-block with people. And it seemed like all of them were using the 2.4GHz band for various purposes. The earphones were continually dropping in and out, not just in their communications with the phone but with each other. It was a weird experience.

But it was also an extreme one. I noticed that my phone didn’t have 4G connectivity that day: it showed only a H+ connection. I presume that was because there were so many people around that the cell towers were overloaded. And that was in the same spot where I’d tested my 4G connectivity previously, achieving download speeds of 270Mbps.

In another mall on another day, there were no such issues. There was just the regular crowd, not the insane post-Christmas one.

Phone and between-bud connections with the BackBeat FIT 3100 earphones were generally quite stable, with only occasional drop outs. Orientation became important at distances greater than around ten metres.

As I’ve already indicated, you shouldn’t expect to get truly deep bass from BackBeat FIT 3100 earphones. I think that they produce it, but because of the lack of a good ear seal, it doesn’t come through. You need a tight coupling between the small driver in earphones and your eardrums for that kind of bass.

But apart from that limitation, the sound from these earphones was very attractive. Their main virtue was a good tonal balance across the upper bass, midrange and lower treble. That, along with avoiding marked distortion, is a good half of making music sound enjoyable and pleasing. On songs like “King of Pain” by The Police, there was enough of the deeper drums (probably the second and higher harmonics) to give a good sense of their presence. Likewise for Sting’s bass guitar. But compared to earphones with a good seal, or headphones with larger drivers, there was a definite absence of weight.

The upper treble was also a little recessed. On the same track, the cymbals weren’t quite as prominent as usual. They were there, but further back in the mix.

On voice, including phone calls, the BackBeat FIT 3100 earphones were clear, making for easy coherence on phone calls and podcasts. The only time that failed was when those damned omnibuses went past on the street, drowning out material.

My Google Pixel 2 XL phone reported that it was able to use the AAC codec with the BackBeat FIT 3100 earphones, so you’re at least potentially getting higher quality sound, especially if you’re using an iPhone or iPod Touch.

It took a little practice to get the button press right for Google Assistant (I assume it’s the same with Siri). You have to hold it for two seconds. But if you hold it for four seconds, you turn off the earpieces. (You can hold either one down to turn them off. Both of them switch off as a result.) So, you have to get the timing right. There is a beep when you’ve hit two seconds, but sometimes it was hard to hear.

But once I worked it out, the BackBeat FIT 3100 earphones picked up my voice quite well enough for Google Assistant to understand my queries. She, in turn, responded clearly.

Call management was fine, too, with these earphones. I asked a couple of the people with whom I spoke whether my voice was clear, and they claimed it was.

The Plantronics BackBeat FIT 3100 earphones are ideal for those who want respectable sound while they’re working out, but also wish to retain situational awareness. That is, they want to be able to hear approaching traffic. Another advantage of this system is that if you simply pause the music, you can hear what people are saying pretty well as clearly as if you were wearing no earbuds. No need to pull them out.

If you want true isolation and deep bass, though, probably best to look elsewhere.

The Plantronics website for the BackBeat FIT 3100 earphones is here.