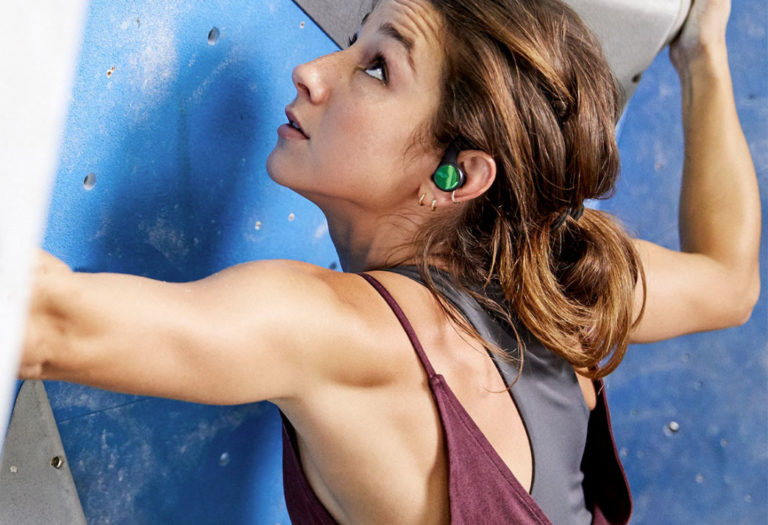 Plantronics has lots of headgear, and we’ve reviewed a lot of it. There are in-ear buds, on-ear buds, proper headphones and much more. This time we’re looking at the sports-orientated Plantronics BackBeat FIT 3200 true wireless earphones.

First, a note on previous models. A while back we reviewed the Plantronics BackBeat FIT 3100 earphones. Naturally, you’d think that the current earphones are merely the new version of those ones. Not so. Those ones were what I’m calling “on-ear”. They are designed to hold the tips slightly out from your ear canals so that you can hear environmental sounds. A tradie who is using the 3100s simply loves them because he can enjoy content while remaining aware of what’s happening around him.

The Plantronics BackBeat FIT 3200 earphones look very similar, but they are designed for proper insertion of the tips into your ear canals. That can have definite advantages in music listening – better bass and noise isolation – but of course it reduces the chance of you hearing that car coming down the road.

Unless you have the “Awareness” mode switched on. For that you need to install the Backbeat app. This provides additional control over the earphones, including changing the control functions of the buttons and choosing one of three preset EQ modes.

The earphones come with ear-hooks plus small wings which allows you to lock them securely into your ears. Three sizes of both are provided. They are a little heavier than many earbuds, weighing 13.5 grams each. You’re unlikely to notice the greater weight, though, thanks to the hooks and wings. Part of the reason for the greater weight would be the larger batteries – they are rated to run for up to eight hours on a charge – and the larger drivers. Most buds run 6mm or thereabouts drivers. These ones are 13.5mm. The silicone tips guide the sound into the smaller space of your ear canals.

As is the way of these things, the Plantronics BackBeat FIT 3200 earbuds come in a case. But this one doesn’t snap open or use magnets to draw in the buds. It is somewhat soft on the outside and has a zipper around the circumference to keep it closed. The soft finish makes for a comfortable carry in a pocket. There’s room inside the case for the short USB Type-A to Micro-B USB charge cable. Somewhat disconcertingly, the left bud is held to the right of the case and the right bud to the left. This places the ear-hooks to the outside, which presumably permits a cleaner design. You snap the buds into place in the case.

Four LEDs on the inside of the case show its charge level with the press of button. The case is good for two full recharges of the buds, giving a total life of up to 24 hours. The buds take two hours for a full charge, while 15 minutes can give them an hour and a half of playback time.

The buds are IP57 rated. That means sweatproof. Indeed, Plantronics explicitly says “Waterproof in fresh water up to 1 m (3.28ft) for 30 minutes.”  “However,” it notes, “Bluetooth does not transmit under water.” The fact that they’re waterproof is nonetheless good because it means safety should you accidentally drop them in a swimming pool.

These earphones feature both press buttons and a touch sensitive surface on both buds. That gives a few options. The buds can be turned off without putting them in the case. And turned back on again. Touching – it’s best to rest the pad of your finger briefly on the surface – the left bud increases the volume by a notch. I’d estimate about two decibels. Resting your finger on it for a second lowers the volume and keeps lowering it as long as your finger remains there.

In the app you can reconfigure this touch control to do things like playing Spotify or invoking Google Assistant or Siri or starting a stopwatch. Or having the Plantronics BackBeat FIT 3200 earphones recite the battery status or tell you the time. The stopwatch could be quite useful since a tap starts or stops it. When you stop it, the earphones announce the elapsed time. It’d be no good for tenths of a second, but to keep track of laps it is fine.

You can also flip the functions each bud to the other if that works better for you.

I used the PLT Signature Balanced EQ setting for my listening. The other two EQ settings were bass boost and treble boost. Overall, with one anomaly, the tonal balance of the Plantronics BackBeat FIT 3200 earphones was good. The anomaly was a somewhat overpowered upper-bass that occasionally resulted in an almost mono-tonal bass performance.

Not entirely, though. There was clearly deeply extended bass, especially at higher volumes. Listening to the Thirty Seconds to Mars’ album Love Lust Faith + Dreams there was lots of truly deep bass, albeit a little disguised by the upper bass prominence.

Treble was controlled, avoiding the tiring shrillness produced by some in-ear headgear. Jared Leto’s voice was clean and coherent. Occasionally there was a slightly hollow sense to the music, but I think again that was due to that peaky upper bass.

That said, the result was entirely enjoyable.

With something a little more conventional – the album Permanent Waves by Rush – the upper bass prominence was a little more restrained. All the elements of the music were clear and the drumming was strong and easy to follow.

Wynton Marsalis playing Baroque Music for Trumpets with the English Chamber Orchestra was a delight from these earphones, since there was no significant bass in the boost region.

I would have preferred the BackBeat app to have customisable EQ instead of three presets. That way the one slightly problematic area could have been pulled down.

Volume levels were more than adequate, even with material that had a fairly low modulation level. In general, I found I preferred to have the volume down a couple of notches compared to my comparison headphones.

The connection to my phone was utterly reliable, perhaps due to the Bluetooth 5.0 support. Putting the phone on my usual rock in the front yard I was able to walk about fifty metres away before any dropouts. Going back slowly, I found that so long as I remained within 35 metres of the phone the connection was perfect regardless of my head orientation.

The Plantronics BackBeat FIT 3200 earphones are solid performers and are especially good for those who have an active lifestyle.