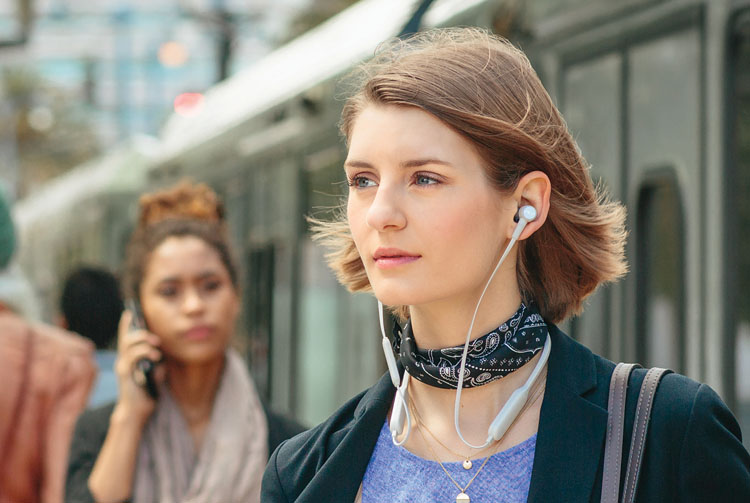 Most noise reducing headgear we’ve seen has either been bulky headphones, or earphones that didn’t do much on the noise reduction front. But here comes Plantronics with the BackBeat GO 410 earphones. They combine effective noise reduction, good performance and very reasonable price.

These are conventional wireless earphones. That is, the BackBeat GO 410 earphones have two buds joined together by a length of cable. I’ve noticed that the industry has taken to calling earphones without the connecting wire “True Wireless”.

The centre part of that length of cable is housed within a curved, flexible band which rests on your neck, and which carries the weight of the two battery pods. The control and microphone pod is a little further along the cable, towards the right ear bud. That made for a comfortable fit, no tugging on my ears, and a sense of security about the buds remaining in place.

The buds are small and were easy to insert in my ears. They use 10mm drivers. Three silicon tip sizes were provided. The largest size fitted me extremely well and very reliably. I found them a comfortable wear.

The buds are slightly magnetic, so sometimes they can pick up paperclips and other stray objects on one’s desk. The two buds can be placed together when they’re not in use. The BackBeat GO 410 earphones detect this state – Plantronics calls it “smart magnetic hibernation sensors” – and switch themselves off, disconnecting from the phone to save battery power. You can switch this function off if you find it inconvenient.

Plantronics rates the battery life of the BackBeat GO 410 earphones at up to 8 hours with noise cancellation switched on and 10 hours with it off. It also says that the “Listen time” is up to 50 hours with noise cancellation on “and without streaming media”. I’m not quite sure what that means. It could be that you’ve got them connected to your phone and plugged into your ears, reducing noise around you, without you playing any music. In other words, that would be for handsfree phone use only.

You charge them up via a Micro-B USB socket on one of the battery pods. This is covered by a rubber stop. It takes about two hours to fully charge them.

The big feature is the active noise cancellation. This works in the usual way. Little microphones on the buds capture the sound in the environment, process it, invert it, and inject it into the music or whatever that you’re listening to. That cancels out much of the noise. Plantronics says that its active noise cancellation can reduce noise by up to 20 decibels.

There are two levels of Active Noise Cancellation on offer. You switch between them using the BackBeat app on the phone to which they’re connected. The app also includes:

Unfortunately, you can only access the manual if the earphones are connected. If you have connection problems, well

These days when you’re flying in a plane noise cancelling headphones are almost a “must”. They protect your ears, and not just from the noise of the airplane itself. To hear your music, or the in-plane entertainment, you generally have to turn the volume up much higher to compete with the noise, and that hurts your ears.

These earphones come with a charge cable – USB Type-A plug on one end, Micro-B USB on the other – much longer than usual. It’s a touch over a metre in length. The reason for the generous length is that it’s dual use. You can pull the Type-A plug off the end, revealing a 3.5mm analogue stereo plug. So, you can hard wire the earphones to a device for listening instead of relying on Bluetooth. This is a very rare feature.

So, I of course jumped to a conclusion. I figured that it was so you could use the noise cancellation when you’re using the in-flight entertainment on an airplane. After all, at several points, including on the box, Plantronics refers to the “in flight cable”. How useful would that be? But it turns out that I was wrong. The only way to use the analogue connection is with the earphones powered off. Power them up again and they connect (or try to connect) to your phone. You can’t have noise cancellation switched on while listening with an analogue connection.

Which seems like a real lost opportunity. However, at least you can use the BackBeat GO 410 earphones even if their batteries are exhausted.

Also provided with the earphones is a soft carry pouch.

Listening through the BackBeat GO 410 earphones

The app provides two so-called EQ settings: “Bright” and “Bass”. The earphones are biased towards a forwards, sometimes intrusive, treble anyway. You will want “Bass”. That balances things out somewhat.

I was about to write that with some music – Ed Sheeran’s X, for example – and initial brightness seemed to settle down. And that other music, George Ezra’s Wanted On Voyage, it remained harsh. But then I realised that I’d listened to Sheeran with active noise cancellation off, and Ezra with it on “High”. Ah, that made the difference. These earphones sound way better with noise cancellation off (although Ezra did remain a little screechy; his voice seemed to have harmonics hitting some high frequency resonances).

Having the “Bass” EQ mode was still preferable, giving that improved subjective balance. The bass extended deeply and powerfully in that mode. It was perhaps a bit higher than realistic, but enjoyable nonetheless.

Some earphones I can tolerate for podcasts only. These were fine for podcasts and music. (I happened across the Plantronics websites and found some user reviews which, as always, made me doubt my judgement. For these listeners, the Plantronics BackBeat Go 410 earphones were the height of high fidelity. Perhaps you’ll agree with them.)

As for the harshening up of the sound with Noise Cancellation switched on, well, in those environments it doesn’t matter much, and may actually be an advantage. It gives the ear something more to grab onto in high noise environments.

My phone reported that it was connected to the earphones using the AAC codec. That’s the higher quality codec available to iPhones.

Active noise cancellation is where the BackBeat GO 410 earphones shone. I played my worst-case airplane scenario and listened with the earphones planted firmly in my ears, with noise cancellation switched on at both of the two levels, and compared them to having it off. That airplane scenario is video I took from a couple of commutes on a turbo-prop Canberra-Sydney hop. I was somewhere down the back of the aircraft where it’s noisiest. These planes are usually much louder than most jets. I played this back at around 100 decibels on my computer speaker system and cycled through the noise reduction settings.

With the noise reduction on its highest level I could hear the plane noise clearly. Okay, I thought. Adequate, I supposed. But then I switched off the noise reduction and jumped a little in my seat, as the full blast of noise kicked in. It was then I realised how effective the noise reduction had been. How much it took away from the otherwise deafening sound. Yes, very effective. It had its greatest impact in the lower midrange.

The “Low” setting was just that. It still reduced the noise substantially, although not as much. It also added a little less harshness to the sound than the high setting. It’s nice to have the choice.

I tried the noise reduction in a quiet environment with nothing playing. “High” produced noticeable levels of white noise, “Low” somewhat less. With “Off” there was no detectable noise. Having noise cancellation sometimes produced a low-level digital noise, mostly in the left ear.

Neither the white noise nor that weird digital (“squiggly” is the adjective that comes to mind) noise was audible if there was sufficient noise to justify switching on noise reduction. They’re just another reason to leave noise reduction off unless you need it.

The Plantronics BackBeat GO 410 earphones are reasonable sounding, quite practical and feature very effective active noise cancellation. And their price is reasonable. It’s just a pity that you can’t use the noise reduction when plugged into an in-flight entertainment system. That said, with many flights now requiring you to use your own device for viewing movies and TV shows, that’s a gradually diminishing problem.

The website for the BackBeat GO 410 earphones is here.

Features
Value for money
Performance
Ease of use
Design
Active noise cancellation!
Excellent value for money
Can be used when battery dead
A pity ANC doesn’t work with a wired connection
4.4