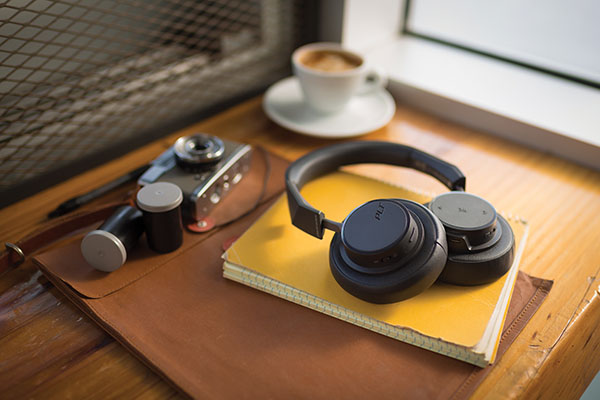 Plantronics is big in headsets, both “enterprise” sets and models for consumer wear. We’re consumers here, so we’ve got a pair of the reasonably priced Plantronics BackBeat GO 605 Bluetooth headphones to try out.

The first thing to note: these headphones are light. I mean that physically. According to my scales, they weigh only 176.8 grams. The headphones I normally use weigh 236.3 grams. You can tell the difference on your head. That also makes for less weight in the goodies you carry around when you’re travelling. Despite this, the ear cups are a good size, fully surrounding my ears rather than sitting on the top. If you want to measure up at home, the holes are circular and 50mm in diameter. The cups can rotate by ninety degrees so that the headphones sit flat, less than 40mm thick. They come with a robust cloth pouch, so they have some protection from other stuff in your bag.

Now, let’s return to that low weight again. One of the nice consequences of that is that I could shake my head quite violently without any movement of the headphones. There was no sense that they wanted to go their own way. And that was despite the quite gentle pressure they exerted on my head. I think these are amongst the most comfortable headphones I’ve used.

The right earcup has a slide power switch, with a spring-loaded extended position to invoke the Bluetooth pairing mode. It also has a button which switches on a bass boost, or answers calls if one’s incoming. You also use that button to end calls or reject them (hold it down for a couple of seconds). Hold it for two seconds at other times, and you’ll invoke Siri/Google Assistant. If you stop the music playing and tap it, the built-in voice will tell you the battery level (high/medium/low) and which phone is connected.

Which phone is “phone 1” or “phone 2”, so says the female voice. You can have the headphones paired to two devices at a time, and that’s what it calls them.

The left earcup has a volume rocker control on its edge. This is easy to use because, unlike most, there’s no play/pause button in the middle. Instead, to play or pause control you press the centre of the spring-loaded panel on the outer face of the left earcup. Its front and back edges also act as track skip forwards and reverse keys.

The BackBeat GO 605 headphones come in black, khaki (it looks more like grey to me) and navy colours. They charge via a Micro-B USB socket on the left earcup. Next to that is a 3.5mm stereo socket for plugging in the included analogue cable. Plantronics rates the battery at 18 hours of use (and takes an hour and a half to charge). If they do go flat, you can still use the headphones via this analogue connection.

Plantronics also rates them for up to 20 days of standby time, and six months in “deep sleep” mode. The audio connection uses the SBC codec, not the more advanced AAC or aptX codecs.

The Plantronics BackBeat GO 605 headphones make for fun listening. They’re bright and clear and a touch boomy in the bass – it’s not wise to the use the bass boost key to add to that. So, for super critical audiophile-level listening? No, not quite the thing. But for light and easy and musical performance, while you’re getting around, they’re just the thing. They provide a little noise isolation thanks to the closed backs and fully surrounding your ears, but if you’re frequently on loud aircraft, you’ll want to choose something with active noise cancellation.

The bass is strong and pulsing, although fairly clear. However, my impression is that it didn’t extend very deeply. When I checked the Plantronics website, I saw that the frequency response is rated as 50 to 20,000 Hertz. The deep stuff is well below 50 Hertz. I think Plantronics might be being a little unkind to itself. I ran a sine wave sweep from 5 hertz, and there was clearly audible sound kicking in from around 20 hertz, albeit fairly low in level.

Still, in practice, the really deep bass did seem quite restrained. Playing, for example, the Sinfonia from Cantata #29 from Wendy Carlos’ Switched-On Back, the bass synth was satisfying, but not as intense as it is with the headphones I commonly use. That said, with tracks like “The Way I Am” from Eminem’s The Marshall Mathers LP, the bass line is powerful and clean. I love the really deep stuff, but most music has little of that.

For phone calls and spoken material like podcasts, voices were clear and eminently coherent.

The Bluetooth connection with my phone was solid out to 15 metres regardless of orientation. I could go well over thirty metres so long as I avoided a particular narrow-angle of head turn.

The Plantronics BackBeat GO 605 headphones provide quite respectable performance for a nicely low price and are especially comfortable and secure in wear.

Plantronics website for the BackBeat GO 605 headphones is here.