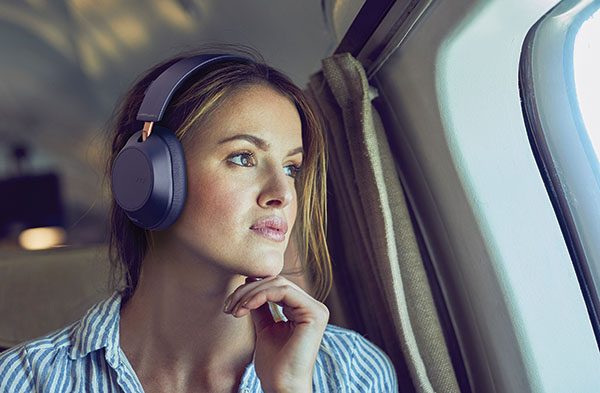 It was only a week or so ago we dug deeply into a set of Plantronics Bluetooth headphones. Now we return with an Active Noise Cancelling set, the Plantronics BackBeat GO 810.

The styling is a little different, and the earcups are oval rather than round, but apart from the ANC there’s a lot of commonality between those headphones and these. The controls seem to be the same. Press different parts of the outside face of the left earcup, and you play/pause or skip tracks forwards and back. Also on that earcup is a rocker control for volume up and down.

On that earcup is also a Micro-B USB socket for charging and a 3.5mm analogue socket for a wired connection. The supplied analogue cable is terminated on both ends with 3.5mm plugs. That makes for easy replacement should the original be lost or get damaged. You do not get a two-prong airplane adaptor.

The right earcup has the power switch. It doubles as a Bluetooth setup button. You can pair the Plantronics BackBeat GO 810 headphones with two devices at a time. A further press button on this earcup switches between a couple of different sound EQ curves – their differences are quite subtle. But this also doubles as the call answer/hang-up button. Hold it down, and Google Assistant or Siri comes to life.

Also provided is a soft cloth pouch for carrying the headphones. The earcups swivel by ninety degrees so that they can be placed in slim spaces, like a briefcase. They’re about 45mm thick in that position.

In most cases, there are at least three ways of listening to Bluetooth headphones. One is, of course, via the Bluetooth connection. The other two ways are with a cable connection. You’ll be using the cable if, for example, you’re listening to in-flight entertainment on many aircraft. Or if, as I am at this moment, you’re using a high-resolution audio player with a couple of hundred gigabytes of CD or better quality music on it.

With cable, you’re free of any limitations in the SBC codec (these headphones do not appear to support either of the higher quality AAC or aptX codecs). And if the battery in the headphones does eventually wear down, you’ll want to use the cable so you can listen in passive mode.

We often skate lightly over this last aspect, but it’s worth dwelling on it for a moment because it gives something of an insight into the mechanical performance of the headphones. For example, how good are the 40mm drivers Plantronics has put into these headphones? How effective is their enclosure design? When they’re powered up, you’re getting an EQ curve that can hide irregularities within the drivers. Used that way, the designer can cover up weaknesses in mechanical design. In passive mode, though, you hear what the hardware actually delivers.

So how are these headphones in passive mode? Not very different, it turns out, from when they’re powered up. And that’s a good thing. They don’t quite offer that feeling of distance, of the sound being out there in the room, that you get with higher end audiophile headphones. But what they do give is good clarity and control, a solid musical beat and no apparent distortion, even pushed to very high levels.

Overall the tonal balance was good, with mids and trebles subjectively satisfying. The mid to upper bass is somewhat forward. That’s something that benefits most music, even if it’s at a small cost in ultimate accuracy, and can result in a slight “chestiness” in some spoken male vocals.

As I’m writing, Donna Summer is powering out “She Works Hard for the Money”. Her voice is down in the mix, as was the norm for those disco days, while the dance beat is front and centre. Stuff recorded around that time often has a harsh top end, but these headphones controlled that, making for a comfortable listen.

Unlike the earlier Plantronics headphones I reviewed, the extended, deep bass of Wendy Carlos’ Switched-On Bach was clearly audible and at something close to the correct level.

The driving beat and enormous bass presence of Primus’ “Southbound Pachyderm” was fully delivered by these headphones, while the subtle play of cymbals and real-noise insertions remained completely clear. Connected by Bluetooth to my phone, the headphones revealed surprising subtleties in Nick Cave’s Dig, Lazarus, Dig!!!

Going to something completely different, the twelve minutes of Soler’s harpsichord Fandango (played by Jukka Tiensuu) were handled with grace and subtlety, yet with the power and rhythmic precision to made me stop typing and just listen.

The headphones do a fine job on active noise reduction. This is the system where outside noise is captured by small microphones in each earpiece, then processed and mixed back into the audio signal at an appropriate level to partially cancel out that noise. The level of cancellation seemed to be a little less than that on the latest Bose models, but in fact it was quite adequate.

As it happens, I’m sitting in an Airbus A380 as I’m writing this paragraph. Switching the ANC on and off shows decent mid-range and treble cancellation, and rather impressive cancellation of the pervasive bass noise in a large jet aircraft. In addition to music, I’ve watched rather a lot of in-flight programming, and the audio has been nicely coherent without the need to turn up the volume to a high level.

Secondly, sometimes ANC headphones can produce a crackling sound when overloaded, such as during take-off, particularly in a turboprop aircraft. I didn’t get to experience one of those aeroplanes with these headphones, but there wasn’t the slightest hint of that during take-off on any of four different kinds of jet aircraft I used these on.

One last unusual aspect: the headphones remember the ANC on/off setting, so when you switch them on they’re in the same state as when you last used them. That is much more convenient in my view than most, in which the ANC switches on by default.

The headphones worked well for hands-free phone operation. I could certainly hear callers clearly, and those to whom I was speaking seemed to have no trouble understanding me. The ANC was helpful there, too, since it removed noise that could compete with caller’s voices.

Plantronics says that the battery life of the headphones is up to 22 hours with Bluetooth and ANC active, and 28 hours without ANC. I can say that the headphones easily took me all the way from Australia to Europe with Active Noise Cancellation engaged most of the time. Part of the time they were plugged into aircraft entertainment systems. Otherwise they spoke to my phone via Bluetooth.

Now here’s something to consider: the Plantronics BackBeat GO 810 headphones are available for $239.99. That’s less than half the cost of a model from a certain well-known brand. That makes them a very attractive proposition.

The website for the BackBeat GO 810 headphones is here. They are available in “Graphite Black”, “Bone White” and “Navy Blue”.