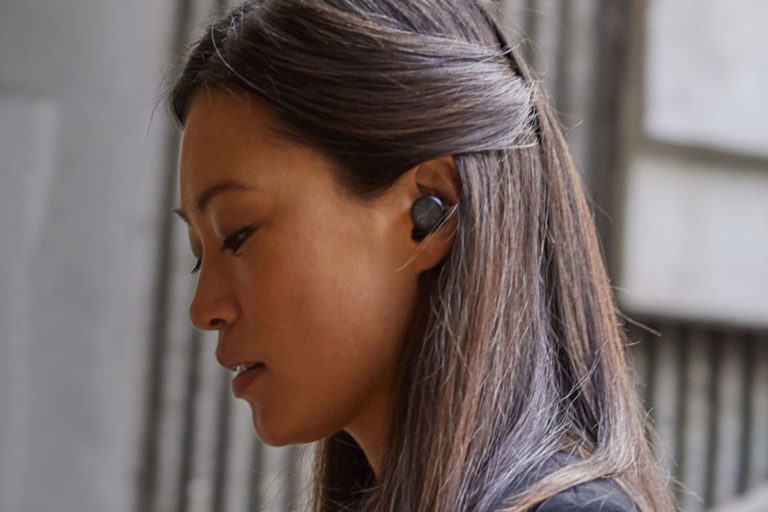 Plantronics – remember them? They supplied the headphones used by the Apollo astronauts – has an almost bewildering range of earphones and headphones. Of which we’ve reviewed quite a few. Here we go again, this time with the Plantronics BackBeat Pro 5100 true wireless earphones.

As is the way of these things, the Plantronics BackBeat Pro 5100 earphones consist of two buds and a charge case. All are fairly small in size. The case is made of hard plastic and measures 63mm by 43mm by 30mm and weighs 50.5 grams, including buds. It’s amongst the smaller ones in the genre. The buds themselves weigh only 5.9 grams each. They don’t have wings or tips – Plantronics has sports “Fit” models with those.

The differences are more than just styling choices. The BackBeat Pro 5100 earphones have somewhat different operational features. For example, they include auto-pause when you remove one of the buds from your ear.

Even without wings or other fittings, I found that the buds – using the largest of the three silicone tips – stayed firmly in my ears throughout an hour-long exercise session. They are sweat resistant and splash proof (IPX4) so you can use them at the gym or outdoors during inclement weather.

They are controlled via a button on each bud. You can assign different functions to the button using the BackBeat app. By default they operate in the usual way with play/pause on the right along with track skipping, call management and invoking Siri or Google Assistant. Also by default, a click on the left button increases the volume. Click and hold lowers it. Amongst the reconfiguration options are switching around the buttons, or setting one to start a Spotify playlist. The BackBeat Pro 5100 gives its status with voice prompts. This can be switched off in the app if you prefer.

The BackBeat Pro 5100 earphones use 5.8mm drivers and Bluetooth 5.0 for comms. Plantronics doesn’t mention the audio codec employed and my Huawei P30 Pro phone didn’t highlight that anything special was in use, so it’s safe to assume that your music will travel to the buds via the SBC codec.

Plantronics reckons the connection range is good up to ten metres. I confirmed that, pacing away from the phone placed on the usual rock in my front yard.

Four microphones are used along with noise cancelling DSP technology to pick up your voice.

The buds are rated at up to 6.5 hours of listening time and 4 hours of talk time. The charge case can refill the buds twice for a total of up to 19.5 hours. It takes up to three hours to fully charge case and buds, and two hours to charge the buds in the case. Ten minutes in the case can give an hour’s listening worth of charge.

Setting up the BackBeat Pro 5100 earphones

You can pair the earphones in the usual way, or through free BackBeat app. I chose the latter. After an instant the phone found the buds and Android asked for pairing permission, which I gave. And that was that.

The BackBeat app manages the firmware of the buds too and notifies you if a new version is available. As, of course, one was once I’d completed the pairing the first time. In this case the installed firmware was version 13.0, while the new firmware was 15.0. The app instructed me to keep the buds turned on and within a metre of the phone, which I did. Then I tapped the “Start Update” button and a nifty graphic indicated the update in progress. Since it’s via Bluetooth, it’s slow progress. Then at some point around 50% the update failed, so said the app. And it said the buds were no longer connected. So I popped them back in their case, pulled them out again and tried again. Again, at around the same point the update failed.

The Plantronics BackBeat Pro 5100 earphones aren’t one of those irritating devices that won’t let you do anything until you’ve updated the firmware, so I was able to go on happily using them.

I had another go the next day. And it had seemingly the same result. The app reported that the update failed and asked me to try again. So I hit the retry button, whereupon the app instantly reported that the firmware was now up to date.

Except that some hours later the app again informed me that a firmware update was available. I forced the BackBeat app to stop then restarted it. Thereafter it reported that the BackBeat Pro 5100 earphones were running 15.0 and that there was no new firmware available.

I thought that was it, but a few days later the app again told me that the firmware needed updating. So I tried yet again. And the update failed yet again. My phone? Perhaps, but I’ve never had any through updating earphone firmware before with this phone, and that includes Plantronics devices.

Anyway, in the end I pulled out my iPhone, installed the iOS version of the BackBeat app on it, paired it with the BackBeat Pro 5100 earphones. The app informed me that a firmware update was available, so I let it do its stuff. Again, slow progress – a little more than twenty minutes – but this time it worked properly.

And since the BackBeat Pro 5100 earphones were now paired to two phones, I could confirm that you can use them in that way. To switch from one phone to another, you’ll need to do something like turn off Bluetooth in the currently connected phone. The buds will then connect to the other. Then you can turn Bluetooth back on in the first phone.

Listening to the BackBeat Pro 5100 earphones.

The good tonal balance was just as well since, unlike some other Plantronics earphones, the app doesn’t include even a limited EQ setting. I think the only significant improvement would be the option for a bit more gain. Hamilton, for example, was at a good level – I was streaming it from TIDAL with level normalisation switched off – but that was with both phone and earphones volume level set at maximum. It could be difficult to achieve a fully satisfying level with some quieter stuff.

I liked the BackBeat Pro 5100 earphones. The little buds sounded rather good and worked very reliably. The buttons were lightly enough sprung to be easily usable. And they used little space, so they were convenient to carry with me all the time.

You can see more information about these earphones, or purchase them from, here.