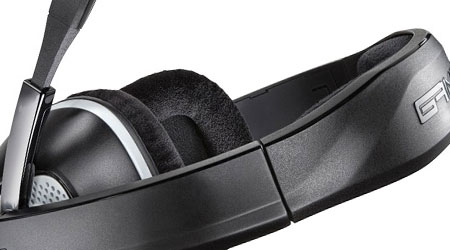 When you do a lot of Xbox gaming late at night and you don’t want to bother your co-habitants (or let her know what you’re up to), the Plantronics Gamecom X95 will help keep everything under wraps.

The best feature of all though, is that it’s wireless, meaning gamers don’t have to sit closely tethered to the telly by a headphone cable.

That USB cable supplies power to the base station but, of course, the X95 headphones also need a power source. We’re expected that, and had a pair of AAA batteries on hand, but we didn’t expect that the process could actually destroy the headphones.

Installing the batteries could certainly be easier.

That’s because installing the batteries requires you to separate the right ear pad from the plastic of the headphone itself. It’s such a fiddle, and the pressure required to push the plush padding away is such that you feel the whole rig is just going to break apart in your hands.

Despite our fears, the review sample survived and, with the batteries installed, it’s then time to pair the headphones to the base station. This is achieved by holding down the power button on the base station until the blue light is solid (not blinking) and then doing the same on the headphones. Easy.

Next step – turn your console on and start gaming. You’ll find that because you’re your Xbox is still plugged into the TV the audio signal will be heard though both the headphones and the television’s speakers. To hear sound only through the headphones, hit mute on the TV’s remote control or reduce the volume level to zero.

The X95 provides a snug grip, but despite the plush padding, the comfort level falls well short of most other gaming headphones we’ve evaluated. And despite their tight fit, the X95s aren’t really suitable for motion gaming on the Kinect – move around a lot (like in Dance Central) and they will eventually fall off.

Sound quality out of the X95 headset is fine, but doesn’t pump as satisfactorily as some of the other headsets produced by Plantronics. The highs are loud, but we wanted more bass.

This deficiency was especially noticeable on R&B songs in Dance Central, where the bass usually erupts out of the soundtrack. The roar of the cars in Burnout Paradise didn’t blow us off of our feet either, but the sparkling sounds of windshield glass shattering told us that the mids and highs were fine. And we hoped to hear some loud rumbling gunfire in Modern Warfare 2, but the gunshots were hollow and empty.

Turning the volume all the way up provided a better sense of immersiveness, but with the sound now at a deafening levels, it was hardly an ideal workaround.

Gamers who love to yell at their opponents will appreciate the included 2.5mm cable, as it allows the headset’s adjustable boom mic to be used over Xbox Live. What’s more, the X95 setup can be used on virtually any device with a 3.5mm stereo plug or stereo analog audio (red/white) cables. We tested it on our Mac and found that by substituting the red/white cables for a 3.5mm to 3.5mm adaptor and using the USB from the computer for power, we had instant wireless sound on our desktop.

One thing of note: because the X95 relies on analog audio connectors, gamers using the native Xbox HDMI connection will likely need to swap their connection to Microsoft’s supplied Xbox cable instead. The regular cable featuring either composite or component connections is what you need and unfortunately, the Xbox 360 wasn’t designed to use both the on-board HDMI and supplied breakout cable at the same time.

There isn’t a whole lot of competition when it comes to stereo Xbox 360 headsets, and with a wireless transmission mode, the X95 is an excellent option for those who game late at night and don’t want to wake the house.

We can’t help but deduct points for some poor design choices, namely a disastrous battery replacement method which we fear will result in numerous broken headphones. Given that, you may want to check out Plantronics’ wired model, the Plantronics Gamecom X40.

Otherwise, if you’re a careful gamer who treats gadgets with tenderness while slaughtering enemies on the battle field, the X95 headset will be an ideal companion.