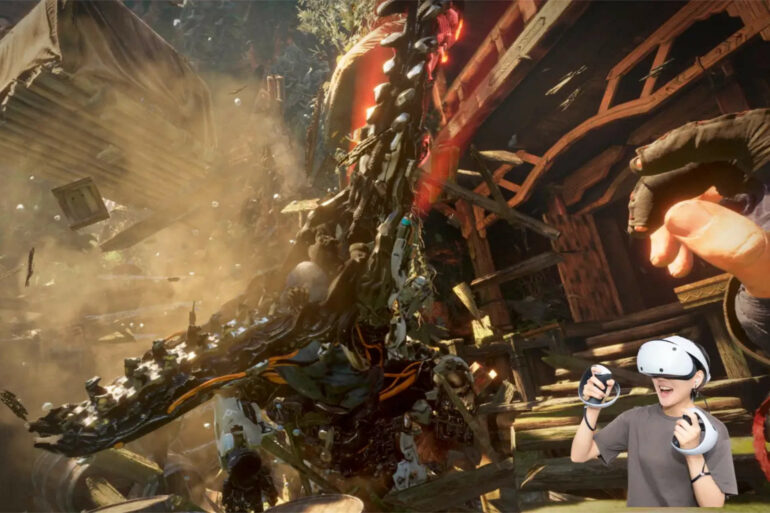 Various new features will make virtual reality safer and easier to share with your friends, according to an early glimpse at the PlayStation VR2 user experience.

A recent blog post shared by Sony revealed what we can expect when going hands-on with the upcoming next-gen VR headset, including several screenshots of the device in action. Safety appears to be a core focus, with the new see-through view letting you check your surroundings without removing the headset. Here, the embedded front cameras on the PlayStation VR2 kick in to produce a grayscale image of the play area. By pressing the headset’s function button or accessing the Control Centre, you can swap between viewing the game, and viewing your surroundings.

An extension of the PlayStation VR2 see-through view is a feature other VR units have had for a while: the ability to customise your play area. With the embedded cameras and PS VR2 Sense controllers, you can scan your room to set precise play boundaries. During gameplay, the system will warn you when approaching boundaries, which is helpful for avoiding damage or causing harm to yourself and others. The original PlayStation VR was limited in this regard, so it’s good to see this has been addressed with the PS VR2.

PlayStation VR2 content creators and streamers will no doubt enjoy the added ability to natively broadcast footage from a PS5 camera, too. This feature lets creators stream both the gameplay and their reactions simultaneously to platforms like Twitch. With prior hardware, this required an external workaround. It sounds like the PS VR2 will make sharing your VR gaming sessions easier than ever.

Sony also reiterated some of the PlayStation VR2’s technical aspects. For example, games in VR Mode provide a 360-degree virtual environment to play in, where content is displayed in a 4000 x 2040 resolution – 2000 x 2040 pixels per eye – in HDR at either 90Hz or 120Hz. Alternatively, Cinematic Mode lets you view non-VR content on a virtual cinema screen. Here, you can enjoy non-VR media at 1920 x 1080 with the option of 24Hz, 60Hz or 120Hz refresh rates.

As for when you can expect the PlayStation VR2 to launch? Sony hasn’t confirmed a release date yet, although there are plenty of whispers indicating a late-2022 or early-2023 launch window.

Everything Sony has revealed about the PlayStation VR2 looks promising. Safety features that bring it up to speed with competitors, and more content creation potential are good ideas indeed. Now all that’s left is to confirm its availability and the all-important price tag.