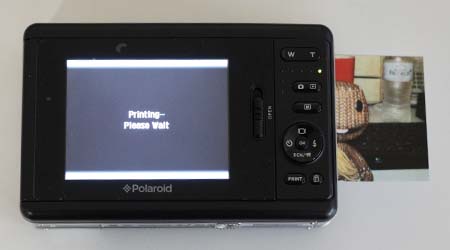 The Polaroid camera might have come back from the dead with limited film runs, but the classic instant camera isn’t comfortable making prints from onboard photographic paper alone. With the Polaroid Two, the digital camera and the photo printer have merged.

The Polaroid Two is not sleek. It’s not stylish or compact or available in fashion colours. Nor is it the greatest performing camera we’ve seen of late, and, here, the specifications tell the story. The box states a maximum range of ISO 400, a number that was a maximum more than five years ago. The resolution is less than that of most $99 cameras – 5 megapixels with the option for seven, provided you’re happy with the firmware cheating a little bit. The lens is fixed, the build is plastic, and while the 7.6cm screen looks like it will do the job nicely, it’s mediocre at best and useless in sunlight.

And still, we can’t help but like it, because this is a real Polaroid.

While Polaroid has been releasing a line of digital cameras for years, none have raised an eyebrow. The Polaroid Two is different because it takes one of these bog standard digicams and mashes it together with the company’s PoGo printer. The weird hybrid offspring is a Polaroid camera that can instantly print your photograph to the special 2 x 3 inch zero ink or “ZINK” paper , with the print emerging right from the camera body – just like the old days.

Much like the old Polaroid cameras, your prints come straight out of the camera. Except this time, they’re also stickers.

Now the quality of prints from zero ink printers has never been flash, but considering prints made to Polaroid photo paper weren’t either, the results feel actually feels exactly right. The whole process is very instant, and very Polaroid.

But it’s more than that, too. Like a classic Polaroid camera, the Two is big, chunky, and obtrusive enough to bring back memories of what it felt like in the ’70s when you brought the original camera out at a party. And more than that, it’s called the “Two” because your original Polaroid was called the Polaroid One.

In use, it’s a lot like an old Polaroid camera, too. There’s no focus and no effort required. You simply turn it on, fire a shot, and the image is yours to do with what you want. If you choose to print it, make sure you’ve got some paper loaded behind the LCD and then press the “print” button at the bottom of the camera. From the print screen, it’s an easy operation to fix red eye or crop, or just print without any changes.

Polaroid’s “monochrome” mode lets you shoot in black-and-white.
Printing it won’t necessarily look the same, however.

Zink isn’t the greatest technology for printing, so the images captured emerge looking somewhat grainy and lacking in colour. The Zink paper has an adhesive peel, so the prints can also be made into stickers, though this doesn’t enhance quality at all. Overall, the images aren’t much better than what you’d get from a phone camera, and in some cases, the phone will be better. In our time with the Two, in fact, even the black-and-white mode somehow yielded cyan, pink, and beige.

We also experienced the occasional glitch, by which we actually mean images did not write properly to the SD card, producing a picture that looked like a bunch of orange and black lines. You can, of course, remove the SD card from the Two camera and transfer your pics to a computer for emailing.

The least impressive aspect of the camera was battery life. We can imagine how problematic powering a printer and a camera would be for a lithium-ion, but we didn’t expect it to be this bad. Expect anywhere between ten and 20 shots per recharge. While that’s consistent with amount of paper you get in a Zink paper pack (single pack of 10 sheets, $6.95 RRP), it’s not a great thing to have a camera need to recharge for an hour following every 12 shots you decide to shoot and print. Though we wanted to like the Two, this was a deal breaker.

Then there’s the price. Marked at $269.95, it’s not actually priced like a Polaroid. The company’s original instant cameras were meant to be cheap and cheerful, and while the Two is definitely cheerful, it’s certainly not great value against other shooters in this price range. But those cameras cannot produce prints from their own bodies, so the Two is something of a unique proposition.

For those who want to relive their childhood or share that thrill of an instant photo with their kids, the Polaroid Two makes a lot of sense. While we live in a time where the photo is instantly there on the back of an LCD, a printed photo is still a lot of fun – especially when it’s a sticker.