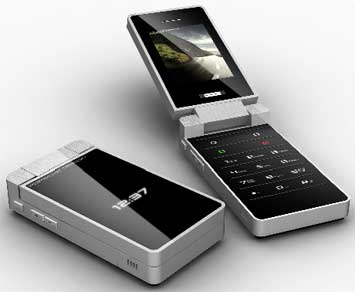 The designer mobile has so far been confined to the realm of the handbag – fashion phones like the LG Prada and Shine have been sexy sellers – for the girls. But now the brand-name handset has been made for man, with the Porsche Design P’9521 (put together by handset veteran Sagem). And this phone is man-fashion all-over, from its solid metal casing to its James Bond-style fingerprint reader, the Porsche Design mobile looks like it’s made from the very chassis of a racecar – but what does it have under the hood?

As far as features go, the Porsche mobile has some nifty tricks in its glovebox, yet in other areas performs like your uncle’s Datsun 120Y. Most glaringly, it’s not 3G, so although it has an internet browser and can be used to connect a PC to the internet, users will be stuck with slow data speeds. (It does have an EDGE receiver, often called 2.5G, but only supported by Telstra in Australia.)

The user interface is beautiful – easy to use, intuitive, and gorgeous to look at. Menus are well laid out and the graphics and animation are sharp. Even the computer software is a pleasure to use – set up similarly to Outlook, the program makes syncing the device a breeze and even stands above the offerings from other big mobile makers.
The fingerprint reader works beautifully and gets top marks for cool – but is it really any more effective than entering a security code? The camera is a respectable 3.2 megapixel with flash, a decent picture quality compared to most mobiles.

Strangely, the handset is equipped with a very effective in-built motion sensor/accelerometer like the iPhone and Sony Ericsson W910 – but the feature is greatly underused, only appearing, from what I could find, in a simple demo game.

Value? For a handset like this, what would you be willing to pay? Let’s face it – what you are really paying for is the Porsche badge. But that’s not necessarily a bad thing. It’s a fashion accessory as well as a phone, it’s marketed to be very exclusive and for that reason it’s going to come with an equally exclusive price tag.

If you want a feature-rich phone with every imaginable bell and whistle, you’ll easily find one for half the price of the Porsche. But if you have a spare two grand to blow on a mobile, this phone pretty much guarantees you won’t see the guy next to you playing with the same model as yours (and you’d have change to spend on car polish.

This phone is beautiful. The interface is sexy, the body feels like it’s been carved out of a Porsche itself, and if you own one, you’ll be the envy of every man around. It has the body of a Porsche, undoubtedly. But whether it’s worth the price tag? Always check under the hood…