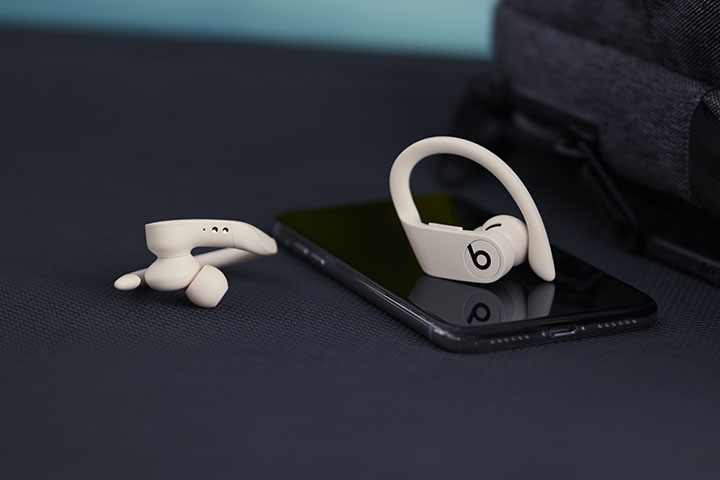 It took me a moment to work out how to charge up the case of the Powerbeats Pro wireless earphones. My USB Type-C power plug wouldn’t fit. Then I had a closer look and found out why.

Of course! Beats by Dr Dre is now owned by Apple, so it has switched over to the Lightning connector for power. Indeed, the Powerbeats Pro earphones come with a suitable cable. No wonder my other plug wouldn’t fit.

I’m pleased that Apple took over the Beats brand. As I remarked years ago, I used to hate the sound of Beats headphones. Apple turned the sound quality around. Going with a Lightning power connection is a small price to pay. And if you’re an Apple home, that would be a definite advantage.

The Powerbeats Pro are true wireless earphones. They connect to your device wirelessly, and they connect to each other wirelessly. They are specifically designed for active users. Beats says that it “listened to real athletes” in designing them. So rather than the diminutive designs of most, these are quite substantial and have fixed ear loops to hold them in place on one’s ears.

And that larger size means both a greater weight and a larger battery. Lots of buds give you three or four hours of use before needing to go back into their case for a recharge. Beats rates the Powerbeats Pro earphones at up to nine hours. With recharges from the case, you get “more than 24 hours of combined playback.” If they do go flat, slip them back into the case for five minutes to get another 90 minutes of use. Fifteen minutes of charging gives them 4.5 hours of playback.

Athletes get sweaty, or possibly wet in the rain. The Powerbeats Pro earphones are IPX4 rated, which is good enough to resist that kind of dampness.

The buds weigh 10.7 or 10.8 grams each. In other words, they are heavier than most. But most of that still modest weight is carried by the hooks over your ears rather than dragging on the silicon tips in your ear canals.

Initially I found the buds a little uncomfortable to wear. There’s a hard body which seemed to press against the flat surfaces of my ears. I persevered and learnt to press the control buttons only lightly. Within a couple of days there was no discomfort. Within a week, I got to the point where I’d often just leave them in my ears for a couple of hours after an audio program had finished, feeling no need to pull them out.

And, speaking of pulling them out, the buds each have a sensor. Remove one from an ear and the program stops playing. You can disable this function in the Beats app, but I left it on. It worked quite reliably.

They come with four different sizes of silicone tips. The largest size fitted me nicely and provided respectable acoustic isolation.

Originally launched in black only, the Powerbeats Pro earphones are now also available in Ivory, Moss (sort of an olive green) and Navy (blue grey).

Regardless of the colour of the buds, the case comes in black only. It’s rather larger than is usual for the genre, which is probably necessary given the need to accommodate the ear hooks on the buds. It weighs 109.1 grams alone, 130.6 grams when loaded with the earphones.

Now we get to one of the most interesting and perhaps unique aspects of the Powerbeats Pro earphones. The left and right sides are identical. More correctly, they are mirror images of each other physically, but identical internally. They both have the electronics for connecting to a source. They can seamlessly switch the connection between themselves. Neither one has to dominate. That ought to improve connectivity with the source device.

It also means that you can use either one – left or right, to your preference – as a hands-free interface for phone calls and such. Also, if you’re using them with your Apple device, the Powerbeats Pro earphones are Siri-enabled. Ask Siri something without any further ado. For Google Assistant, you’ll have to tap the right spot on your phone. I guess that’s another bit of Apple-centrism in the Powerbeats Pro.

Another mirror-image duplication is the controls. There are three buttons on each earpiece. A press button over the place where the bud enters one’s ears handles play/pause media and answer/hang up with calls. It operates the same on both sides. On top of both earphones are two further buttons: volume up and volume down. They both operate the same way.

If you normally use your right hand to manipulate these controls but for the moment it’s tied up with other activities, you can just use your left hand.

I’ve mentioned the case and the battery life. Well, perhaps not thoroughly enough in the case of battery life, but after a month or more of use, I’ve never been prompted by a near-end-of-life experience. The earphones don’t tell you how much life they have left, although the app gives you a percentage. Indeed, it gives you the charge percentage for the case as well if the buds are in it and the lid is open. I simply used the Powerbeats Pro earphones as my only day-to-day earphones for several weeks, returned them to the case whenever they were not in my ears, and plugged the case in for a recharge whenever it crossed my mind.

The case takes around two and a half hours to charge up. At one point I noticed the case was down to 10%. Had it hit zero, then I’d have had only nine-ish hours left!

One thing I would have liked was a power button. There are a sufficient number of controls on each bud to have permitted that. Perhaps holding down the multifunction button for ten seconds. But, no, the only way to power-down and disconnect the earphones is by putting them in their case.

On just one occasion during those weeks things ran berserk. The buds wouldn’t connect and seemed to be unresponsive. That kind of thing happens with most Bluetooth earphones very occasionally. Switch off then on is the solution. Fortunately I had the case with me, so I could put the Powerbeats Pro earphones into it for a few seconds, then extract them again, renewed and ready to go. But if I hadn’t …

Connecting to the Powerbeats Pro earphones

How you connect to the Powerbeats Pro earphones depends on your device. With an Android phone, the easiest way was to install the Beats app and have it guide you through the process. I did this a couple of times (I nuked the connection at one point so it could be devoted to the iPhone) and both times it worked well. A little wizard tells you precisely what to do (basically, put the earphones into their case, then open the lid). No fiddling around in the Bluetooth menu involved.

With iOS devices it was a different matter … and somewhat easier. The earphones and iPhones (and iPads) seemed to seek each other out. On several occasions a pop-up would appear on the iPhone or iPad noting that the Powerbeats Pro earphones were in the vicinity and asking whether I wanted to pair them.

My first impression with the Powerbeats Pro earphones was one of impressive balance. That was principally due to a rare bass solidity. Look, you’re going to have to search far and wide to find Bluetooth true wireless earphones with more impressive bass performance. Both depth and power were first class in the bass registers.

Yet they weren’t too overblown. The male spoken voice on podcasts was clear, coherent and not at all “chesty” (an effect of excessive mid-bass).

With just about all the music I tried, the general sense was enjoyable, with excellent clarity and coherence and the ability to hear all manner of detail. I think most people will really enjoy these earphones. They are really a step up from the run-of-the-mill true wireless earphones.

When I put on my audiophile hat and pay close attention to the music, my impressions are a little different. Yes, the bass is strong and extended. That has been a long-standing characteristic of Beats headphones, even in the disappointing pre-Apple days. Hey, hip-hop needs a convincing bass line.

There’s also a decent level of high-ish frequencies. Cymbals are sharp, clear and well-defined. But some vocals are rather too sibiliant and with a lot of music there’s a generally recess in the midrange body. Treble and bass, but not so much midrange. That makes for a brash, bright and upfront performance, but also a somewhat tiring one.

And now as I’m proofreading this a couple of days after writing it, I’ve got The Terskey Brothers debut album playing on them, from Spotify via my phone.  I don’t resile from what I’ve written in this section, but I am finding the music very lively, quite exciting. Audiophile? No. Fun? Yes.

Now, it seems to me that the Powerbeat Pro earphones work differently, depending on whether you’re using an iPhone or an Android phone. I almost exclusively used the latter, but did a bit of brief checking with an iPhone. None of the following issues arose with an iPhone.

Yet despite that, when my phone was in my pocket, the connection dropping out was not infrequent, but quite unexpected because there was no difference in activity or position between when it happened and when it didn’t. A bit of static electricity building up in my clothes perhaps? Who knows?

Almost always the reconnection was very nearly instantaneous. A good proportion of the time, though, after the reconnection the left and right channels were slightly out of sync. Most times, pausing playback for a couple of seconds and then resuming fixed that.

The other troublesome thing was the volume level. The bud controls worked very well. But whenever I paused playback and then resumed, they went to maximum volume. This was clearly some kind of glitch, because when I stabbed the down-volume button on one of the buds, the level went instantly down to slightly below the level it had been before. I’d then usually tap the up-volume button to bring it back to the correct level.

The workaround for this was to set the earphone volume to maximum and then control the level with the phone controls. But of course that reduces the convenience of these earphones.

Again, these issues were not apparent when connected to my iPhone.

So, the Powerbeats Pro earphones are especially well suited to the iPhone. That said, they delivered such a charming audio performance, provided a rare bass performance and were so secure on my ears that for the moment that shall remain by earphones of choice, despite me being an Android man.

The Powerbeats Pro earphones are available from the usual sites as well as direct from Beats by Dre.