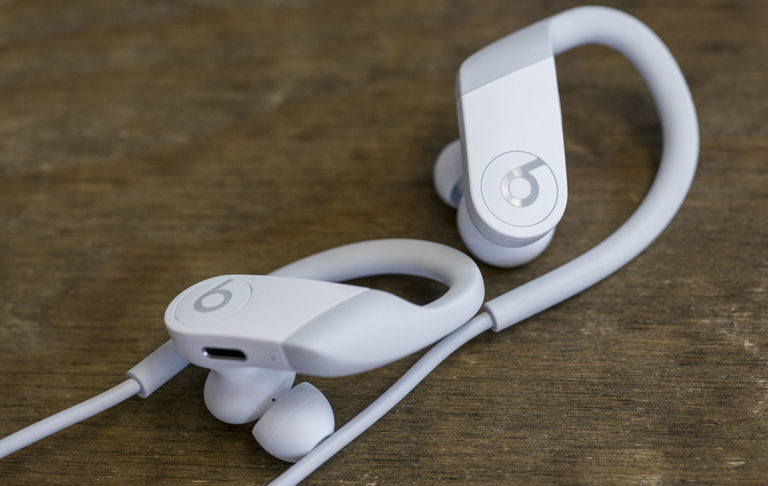 The Bluetooth earphones I most return to when I’m not reviewing something else are the Powerbeats Pro true wireless earphones. We reviewed them here. But their appeal to some will no doubt be diminished by the nearly $350 price tag. However, now Beats has released the non-Pro Powerbeats earphones at a much lower $219.95.

Why the lower price? Because the Powerbeats lack one major feature of the Powerbeats Pro: they are not true wireless earphones. That is, the left and right earpieces are joined together by a short length of wire. So, of course, they’re not as cool. And as is the norm for wired Bluetooth earphones, neither do they come with a charge case – just a soft carry satchel.

Are those changes a killer for the Powerbeats? Far from it. There are actual advantages to the Powerbeats, which I’ll get to shortly. Meanwhile, what do you get?

The earpieces of the Powerbeats use over-ear hooks for a secure fit. Indeed, they look almost identical to the Powerbeats Pro earphones, except with the addition of the wire between them. They come with four different sizes of silicone tips. Putting them on involves tucking your ears into the loops. I did lots of bike riding and a bit of jogging – no gym for me in these lockdown days – and there was never the slightest sense of them loosening.

There are three colour options: white, black and red. The review ones were white. I’m generally not too keen on wearing white earphones, but despite their fairly large size, they didn’t look out of place. I do worry that they’ll get visibly dirty over time, although there was no hint of that over the week or so I was using them – even after doing some garden work.

The Powerbeats are IPX4 rated, which means they’ll be fine with a bit of exercise sweat and rain showers.

Beats doesn’t say much about the internal design details, other than mentioning that they use the Apple H1 chip and operate as Class 1 Bluetooth devices. I’ve found other devices using the H1 chip work very nicely, and Class 1 means higher power and thus greater range. Indeed, I found a solid connection out to 25 metres at worst and 50 metres if you keep your head pointed the right way.

Apart from the much lower price, the major advantage of the Powerbeats over the Powerbeats Pro earphones is left-right stability. The Powerbeats Pro earphones occasionally respond to some brief signal interference by going slightly out of sync with each other. It’s disconcerting to have the sound coming from both earphones the same, yet slightly different in timing. It’s easily solved by pausing playback for about five seconds and then resuming. Presumably it has something to do with the wireless communication between the phone and the buds and each bud with the other. But with the Powerbeats, there is no wireless communication between the earphones so they never go out of sync.

The connection was a little more reliable overall than the Powerbeats Pro. Beats doesn’t mention any of the premium codecs, so it’s safe to assume that it uses the basic Bluetooth SBC codec for stereo music.

Isolation from external sounds was good. As I said, I did a fair bit of bike riding and found that wearing the Powerbeats earphones presented no difficulties while wearing a bike helmet, and that even at 40km/h, wind noise was controlled sufficiently well that I could continue to listen to podcasts without difficulty. The volume controls on the earphones proved convenient, too, in those circumstances. The volume adjustment was independent of the phone’s volume setting – some headphones adjust their volume by telling the phone to turn its level up or down. This one adjust on top of whatever the phone setting is. So you can set the phone to max and do all your adjustment on the Powerbeats earphones.

The controls are lightly sprung, so easy to operate. Comfort was reasonable and improved over time as my ears got used the earphones.

Listening to the Powerbeats earphones

I keep insisting that the former terrible reputation Beats had for audio quality is no longer deserved. When Apple took over Beats, the new range of products eliminated the boomy, dull sound that previously marked the brand. That much improved quality continues with the Powerbeats. Overall, they sound very similar to the Powerbeats Pro. I wouldn’t be surprised if they use the same drivers and amplifiers – Beats is coy about those technical details.

The bass balance of Powerbeats was good. There was plenty of deep and mid bass, but it wasn’t overblown. Oh, what a change from those earlier models. That meant that I could enjoy music with high bass levels – such as Billie Eilish’s Grammy award-winning album – without the bass covering up all the other stuff in the recording. But it also meant that I could enjoy and clearly follow the more restrained bass of older recordings. With recordings a little inclined towards a bright tone – such as Love Over Gold by Dire Straits – the Powerbeats earphones gave a slightly clangy, pinched feel to the snare drum. That’s by no means unique to them. Despite this, on the title track there was a nice sense of air underneath the percussion. Mark Knopfler’s vocals were a little recessed, not necessarily a bad thing.

I know, Dire Straits had a reputation for audiophile quality recordings, but by the middle of the 1980s it had got sucked into that 1980s brightness. So going back to the 1960s we get a more naturalistic recording from Blood, Sweats and Tears. With “I’ll Love You More Than You’ll Ever Know”, the Powerbeats had the bass at just the right level, with a nice solid thump from the kick drum and the bass guitar well-articulated. The brass accompaniment had real bite. The cymbals seemed to lack some of their upper harmonics, sounding a bit clicky, rather than ringing.

I think it was this which holds the Powerbeats back from audiophile performance, instead gifting them with a generally listenable, pleasant character. But, hey, we’re talking about earphones that cost only a couple of hundred dollars. Not audiophile, but a clear step above the similarly-priced Bluetooth pack for music.

I liked the Powerbeats headphones a lot. They are practical, decent sounding, and reliable. And I found that I never had to worry about them working loose from my ears. Plus, the price is good.

You can read about the Powerbeats earphones here.